The level design in Red Dead Redemption 2 is all about creating contrast. This comes through loud and clear when it comes to establishing distinctions between wealth and poverty. While some people are supposed to be living in sumptuous mansions, others apparently have to make do with shabby shacks. You can see this everywhere in the game world from Tumbleweed to Saint Denis. Why does the level design in Red Dead Redemption 2 create such a strong distinction between wealth and poverty? The answer to this question has a lot to do with history.

The game is, of course, a work of fiction, but Red Dead Redemption 2 is definitely grounded in reality. The time? 1899. The place? America. The question at this point is what kind of processes were responsible for producing the spectacular wealth and crushing poverty which are depicted in Red Dead Redemption 2. The best way to approach this particular subject is to start at the grass roots. I mean this quite literally. I’m going to start by talking to you about farms.

Take some time to explore New Hannover and you’ll come across a lot of abandoned properties. Valentine, in particular, provides a pretty good example of this. While a few of them look like they’re still being worked, most of the farms in this part of the game world are clearly supposed to be failing. Think about their surroundings and you’ll soon figure out why. I’m referring to the railways. There was a time when people were promised “forty acres and a mule” if they would found a farm in places like Valentine. Some of these were successful at first, but they started to struggle when the railways were put in place. What happened was that wealthy people from the East began buying up large tracts of land in the Midwest. They brought all sorts of machinery like tractors, harvesters and threshers which could plant and process grain much more efficiently than a mule. The crops were sent by train to the East. These two things combined caused prices to plummet. The result was that farmers in the Midwest were reduced to poverty because they couldn’t possibly compete on price. They often just abandoned their properties. 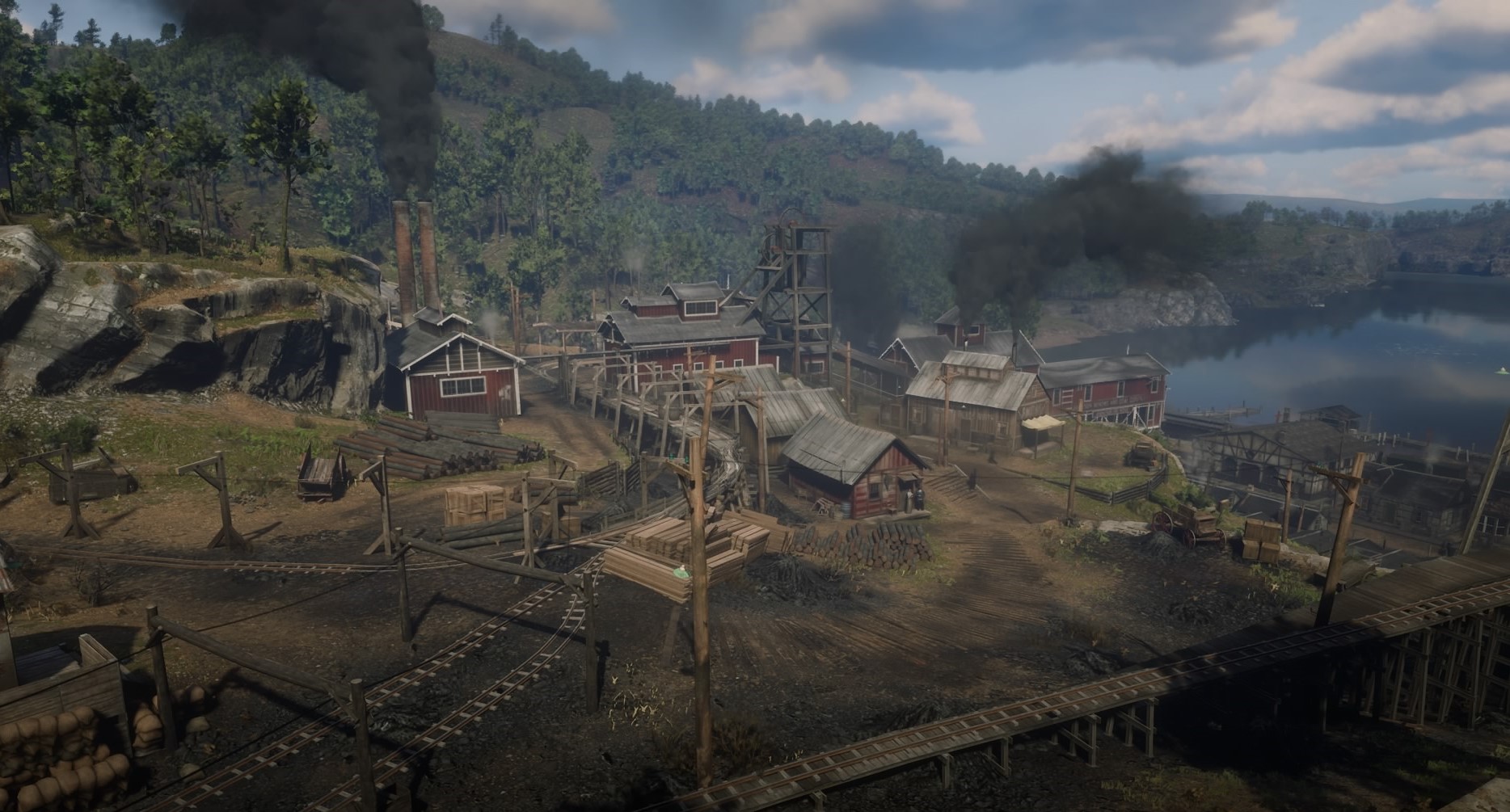 New Hannover is home to all sorts of different people in Red Dead Redemption 2. They’re clearly supposed to be farmers in Valentine, but they look more like trappers and traders in Roanoke Ridge. This part of the game world is basically just a bunch of broken-down buildings beside a waterway called the Kamassa River. Similar to the farmers in Valentine, what seems to have reduced these people to poverty would have to be the railways. You can even hear train whistles while standing on the banks of the Kamassa River. The fact of the matter is that places like Roanoke Ridge were settled by trappers and traders who plied their trade along the waterways of the South and Midwest. The waterways were by far the most convenient means of transportation until the railways were put in place. These people collected pelts which they sent by boat to the East. The problem was that trains could transport pelts much better than boats. This resulted in towns being built along the railways instead of the waterways. The trappers and traders who couldn’t make the move were driven out of business.

Annesburg is on the eastern edge of New Hannover. This part of the game world is mostly just mountains. You’ll notice that mining is big business. You can see people carrying coal from the mountains to a factory in the middle of town. They send the material to Saint Denis on the railways. You might think this would produce wealth, but the signs of poverty are unmistakable. People are living in what are clearly supposed to be slums. The reason would have to be the Jameson Mining and Coal Company. Trains moved grain and pelts, but they also transported coal. I couldn’t even tell you how much was mined in the South and Midwest. This was done by creating what came to be known as “company towns.” These were places where basically everything was private property. People were paid with a kind of money called “scrip” which they could only spend at stores that were owned by the company. The point was to make them completely dependent upon their employer. This of course led to them being driven well past the point of poverty. 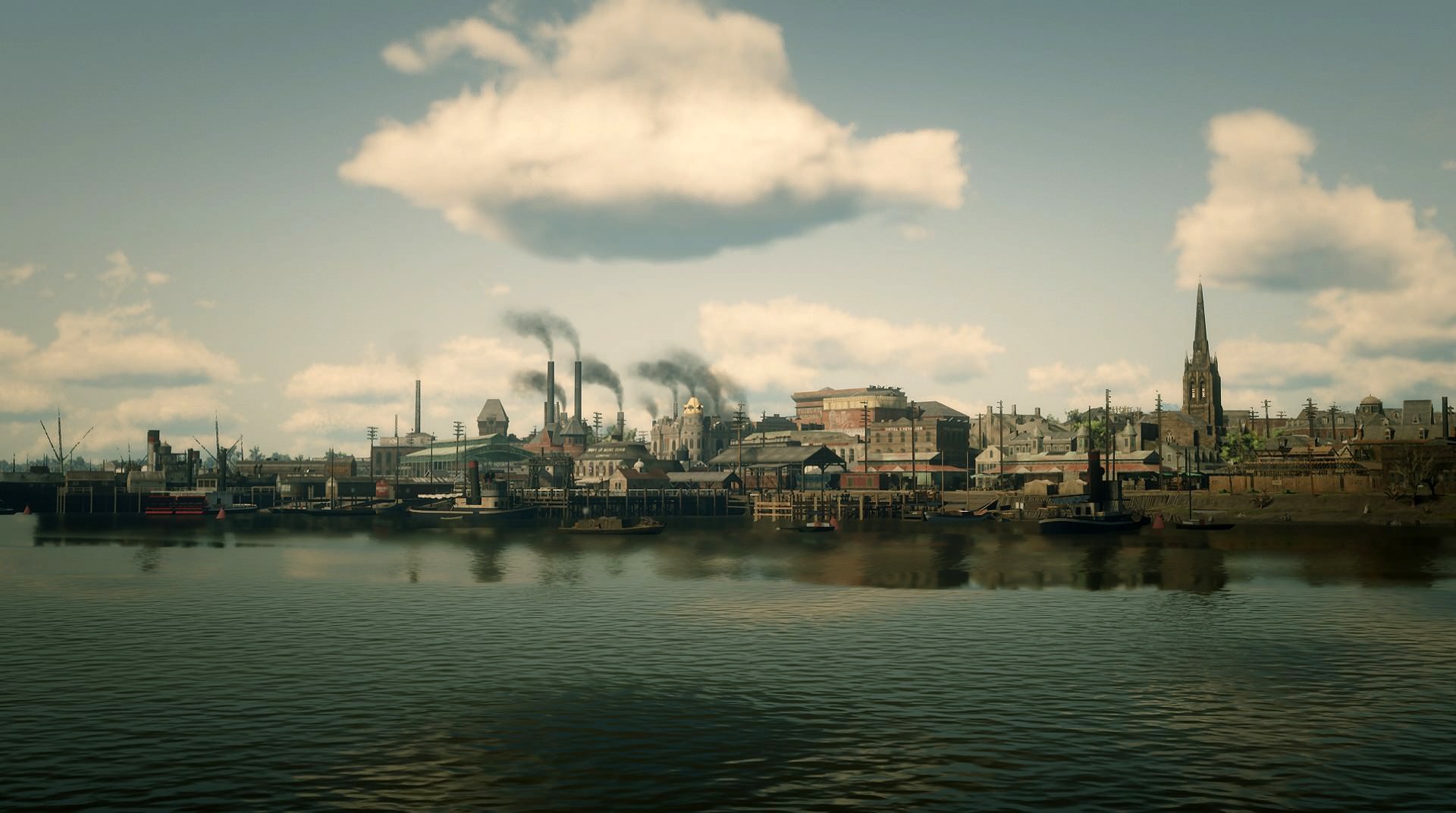 Stroll through the streets and you’ll see some sumptuous mansions, but you’ll mostly just see a bunch of shabby shacks in Saint Denis. This part of the game world has a lot of what are basically slums. You can see these along the banks of the Lannahechee River. They sprawl out beside the factories. When they were driven out of their farms, people came to cities like Saint Denis in search of stable employment. This pretty much always meant working in a factory. Living conditions were poor. Working conditions weren’t much better. People often had to work from dawn until dusk for next to nothing in terms of pay. This meant that people could only afford the most basic forms of housing. They could sometimes rent a room from their employer, but people were forced into slums for the most part. These were built near factories which of course made them dirty, smelly and noisy. Some of them even lacked a convenient supply of water. Supply couldn’t meet demand, so they were often crowded, too. Privacy was definitely at a premium. People sometimes wound up sharing a room with several other residents.

Framed by Flowers: An Interview with Illustrator Sibylline Meynet