In addition to a smattering of other activities, I spend a good chunk of my day thinking and writing about videogames. I do so partly because if I wasn’t writing about games, I would definitely still be playing them. This is because, for the most part, I find games to be an entertaining and rewarding medium; and if I can find some deeper, often politically contextualized meaning beneath their liquid crystal surfaces, all the better.

Despite often writing from a progressive point of view, I don’t consider the act of writing about games to be a form of activism, or even particularly progressive. If I wanted my writing to better serve activist outcomes, I would probably be covering protests or pitching to Jacobin and Politico. As much as I enjoy injecting politics and history into a field that can seem so intractably resistant to new or challenging perspectives, I don’t find much appeal in spending that same energy on an audience who is already steeped in the stuff.

All this serves as an introduction to some of the naval-gazing consternation that has stricken me in the wake of the recent release of Rockstar’s Red Dead Redemption 2. I spent virtually no time thinking about RDR2 until, like many others, my attention was grabbed during the press-run a couple of weeks before its release, when Rockstar co-founder, Dan Houser, boasted in a Vulture interview about employees working hundred hour weeks in order to get the game released on time. This open admittance of grotesquely unfair labor conditions is just another straw atop a pile of other notably “problematic” aspects of Rockstar’s oeuvre in general, and their series of cowboy games in particular. After all, the first Red Dead Redemption’s “Dastardly” achievement, which awarded players for leaving a bound woman on train tracks, was used as a prime example in the Feminist Frequency video series about the games industry’s awful track record in regards to gender equality, and rightly so. The game was also brought up repeatedly for its use of women as – often violently treated – props to tell its story. There’s also Rockstar’s puerile South Parkian politics, which infect everything they make and which reward violent hetero male fantasies and encourage detachment from context and consequence. 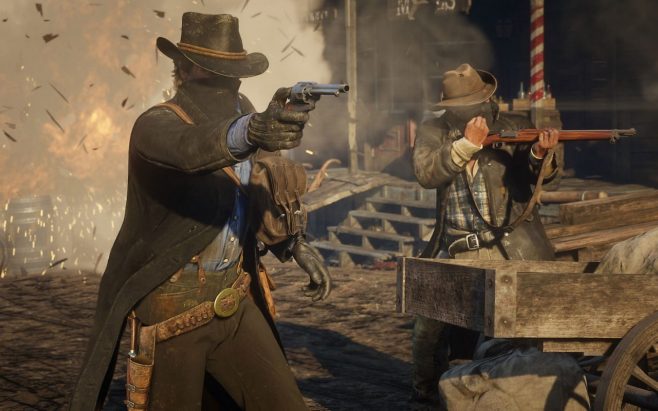 Issues like these, among others, kept me from playing Grand Theft Auto V when it came out. And I have no regrets at having missed out on the greasy quagmire surrounding that game. In RDR2’s case, however, I’ve taken the plunge and purchased the game, with hopes to eventually write about it. I find western narratives fascinating, foundational as they are to America’s self-perception and modern myth-making, and any chance I have to explore this subject through the lens of games is one I tend to leap at. Yet in parallel to my buying the game, ordering the disc and downloading all 80 gigabytes of its windswept plains, snowy valleys and extremely realistic animal skinnings, my social media timeline has been replete with examples of why the game is awful, why the workers who produced it were exploited, along with strong words from respected colleagues about why they won’t even touch it. I’ve read Twitter accounts which point out that even as we writers spend time pointing to all the bloody guts and scrapings littering the floor of its production, we’ll still inevitably marvel at the beautiful sausage produced by Rockstar’s grisly machinery in the next breath. And some of us already have; which is why I’m so torn, why I’ve wound up asking myself what my own personal moral responsibility is when covering games like these.

The onus, I’m aware, is on my ability to justify my investment of time, money and attention, by writing a critique that will call attention to the aspects of the game that more mainstream critics tend to ignore: its historical context, the blind spots of that settler-colonialist frontier fantasy that any western, by necessity, must embrace. Then there are the questions to be brought up about Rockstar’s culture of labor and crunch: how we as an audience tend to support it even as we make noise about its deleterious effects, how the products we enjoy are so disconnected from their means of production, and how that divide allows worker exploitation to continue unhindered.

But these are all angles intended to subvert the literal buy-in of purchasing a $60 game so that I can write about it to a small, enthusiast audience online.

But these are all angles intended to subvert the literal buy-in of purchasing a $60 game so that I can write about it to a small, enthusiast audience online. One might even call them excuses. There is only so much compartmentalization you can do in separating a game from its production process and the worldview it espouses before you, as a writer, become morally compromised. Even as I ground the themes that go unchallenged elsewhere in real history and real political context, I’m still inevitably going to paint a picture of a polished product, and a magnificent feat accomplished. I’m still going to add words to the swirling conflagration that is the game’s hype – a bonfire fanned originally by Rockstar, which critics, both those in stricken awe and those in sneering contempt, will propel forward. Am I supposed to let the flames to lick at my heels, as I attempt to wrestle some kind of original point out of a series and a company dedicated to rehashing ideas driven into the dry dirt by Hollywood fifty years ago? Or do I turn my back on it all?

It’s a complicated question that doesn’t promise to become less complicated any time soon. As I get older, as other aspects of my life expand in importance, wrestling with this complexity becomes much less appealing. As a result, it feels like my choices are to either stop writing about games or to keep doing so with the knowledge that maybe I’m not actually making anything better – and making my peace with that. There’s also the more honest, third option of relinquishing the use of critical writing as an excuse to keep buying and drawing attention shitty mainstream games.

The truth, however, is that I still do like playing games of all quality levels, produced under all sorts of labor conditions and written with various amounts of political self-awareness. Despite all the swirling self-doubt I’ve laid out above, there remains a simple satisfaction in exploring a novel idea and dissecting the often unintended meaning behind a creative work. That pleasure, alongside the often heartwarming feedback I’ve received about my pieces, provides a little fuel to keep going, at least until the next morally compromising game finds its way into my library.