What is architecture? While pretty much everyone is familiar with architecture as a product, few people have actually taken the time to think about it in terms of practice and process. Buildings are one thing, but how they’re designed is definitely something else.

Architecture consists of creating order by manipulating form and space. The idea is to produce meaning through the establishment of relationships. These have to be established between parts, but they have to be established between each part and the structure as a whole, too. You define a room for example when you put walls around a floor and a ceiling. You define a house when you put a living room and a kitchen below a bedroom and a bathroom. When you establish these relationships, you produce meaning where none previously existed. In other words, you create order by manipulating form and space.

The problem is that you can only manipulate form and space to a certain point. What can be done is determined by the laws of physics. This fact is made manifest by the blueprint. Since they’re used as construction documents, blueprints necessarily depict a structure as it existed, exists or will exist. Blueprints represent what you can actually build. Things always boil down to blueprints for architects, but videogame designers aren’t bound by the same constraints. Because their work takes place in a purely digital medium, they have almost complete freedom to explore what you could probably call impossible architecture. The designer behind Manifold Garden, William Chyr, provides a perfect example of this. 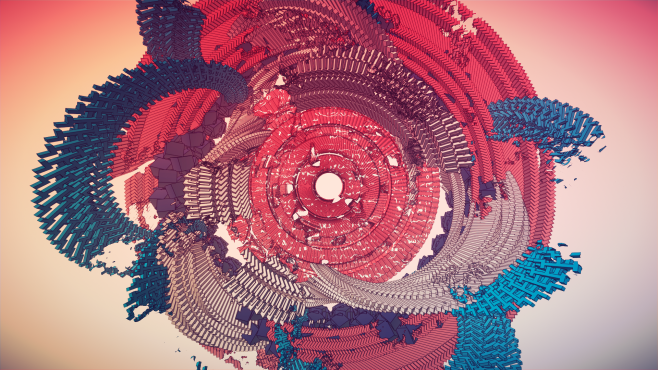 The game world in Manifold Garden is a bit like a sheet of paper that has been folded an infinite number of times and then struck with a hole punch. (The game world is a manifold, so it’s actually a topological space that’s connected, but remains Euclidean around each point). Leap from a ledge and you’ll find yourself continually falling past the same ledge. In other words, Chyr designed a game that defies the laws of physics.

The game world in Manifold Garden is filled with structures that you’ll never see on a blueprint because they would be impossible to actually build. Since none of them fail to impress, you could be forgiven for not noticing, but if you stop to study their form, you’ll come to the realization that almost every structure has a couple of features that would cause it to collapse. While some have long span roofs without a sufficient number of columns for support, others have huge halls which consist of basically nothing but glass. You’ll come across a lot of tall towers that look like they could topple over at just about any time, too. Many have misplaced centers of gravity due to unevenly distributed weight. Because these would all be deemed structurally unsound, they would never make it onto a blueprint, but the game world exists in a purely digital medium, so they’re able to stand in Manifold Garden without a problem.

The structures in Manifold Garden manipulate space in interesting ways. Look around you in just about any part of the game world and you’ll see what appear to be copies of a given structure. Similar to a reflection in multiple mirrors, you might think that you’re looking at separate things, but the game world isn’t governed by the laws of physics that most people take for granted, so what you’re actually seeing are different dimensions of the same structure. They’re not copies. You’ll hit the top if you fall off the bottom. (You might actually hit the side). This makes telling top from bottom pretty much impossible, but it breaks down the important distinction between inside and outside, too. They exist in more than one place at the same time, so regardless of where you are in the game world, you’re both inside and outside a given structure. This works in Manifold Garden, but it would make for some bad blueprints. 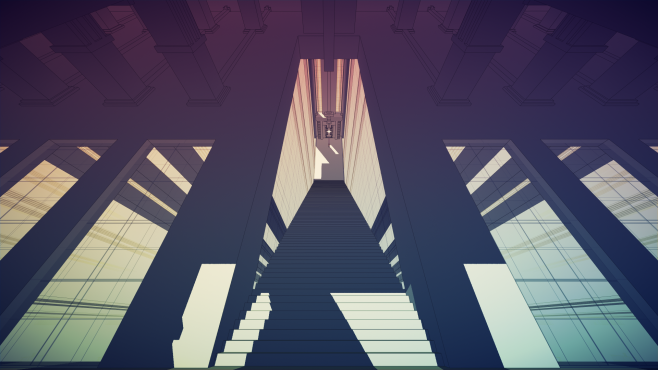 What exactly is the impact of this when it comes to creating order through architecture? Since they manipulate form and space almost past the point of creating order, the structures in Manifold Garden call into question the purpose of architecture as a practice and process. They challenge your assumptions about what architecture is even supposed to accomplish. This at least partly explains why wrapping your head around the structures in Manifold Garden is so much easier said than done. They manipulate form and space in ways that definitely break your mind, but they force you to reconsider the concept that architecture is meant to make the world around you more comprehensible, too. (Most people accept the idea that architecture creates order without ever having thought about it). Since people expect architecture to provide meaning, structures that aren’t clearly defined seem strangely unsettling. They keep you looking for something which isn’t there, so they come off as being kind of uncanny. They promise clarity but deliver confusion.

What is architecture? Chyr explored this question in Manifold Garden by pushing the practice and process of architecture to its limits. Chyr manipulated form and space beyond anything which you’ll ever see on a blueprint by designing a game that defies the laws of physics. The result was a challenge to the concept of creating order through architecture. The majority of designers don’t do anything like this.

In contrast to Chyr, most designers have never taken the time to think about impossible architecture. They work in a purely digital medium, so they’re only limited by their imaginations when it comes to manipulating form and space, but only a few designers have actually gone beyond blueprints. Because technology hasn’t always been up to the task, there’s definitely a reason why it hasn’t happened, but it’s too bad that more games like Manifold Garden haven’t been made. The fact of the matter is that designers are in the perfect position to explore the possibility space of architecture. Since designers aren’t bound to blueprints, they can literally take things to a whole new dimension.

Asra from The Arcana