In any storytelling format, it’s important to have well-developed and interesting characters. Good characters will ground us so that we can appreciate all the story beats as they come, thus providing us with a frame of reference for what emotions the author or director is attempting to elicit. For example, we can appreciate the magic and wizardry of Harry Potter because we see it through the eyes of child who grew up without magic and wizardry. The best horror films work because we get to know the (hopefully) interesting victims before they are systematically slaughtered, thus leaving an impact on us as viewers.

Resident Evil 7, the newest entry in Capcom’s long-running horror franchise, is a reinvention of the series. The focus has been narrowed from the bombast and outright insanity of recent installments to a more claustrophobic and deliberately paced experienced with an emphasis on survival and atmosphere. The homely Baker family serves as the primary antagonists to Ethan Winters, a sort of everyman who is in search of his long lost wife.

As a character, Ethan falls short of being memorable in any meaningful way. Serving mostly as a sort of cypher for the player, he remains largely silent throughout most of the game. Luckily, the Bakers themselves pick up Ethan’s slack; learning about the kind of people this down-home and humble family was before being transformed into a murderous pack of goo monsters is a major highlight of the game. But even they are overshadowed by what is arguably the most engaging character in any Resident Evil game: the Baker house.

Upon finishing the introductory hour of the game, the player is introduced to the house proper. Here, at the start, you are confined to just a few rooms: the dining room, kitchen, living area and pantry. The player must evade a lurking Jack Baker here, meaning you must slowly and methodically make your way through the rooms. The result of this is twofold. First, the player is introduced to important gameplay mechanics–stealth, in this case. Second, players become familiar with the layout of the area.

The game gates off many areas until the previous wings of the house have had a chance to be thoroughly explored. In this way, the house itself becomes a character in constant, ongoing development. The Bakers are great characters, but they are inarguably binary: first, before the events of the game, they were sweet and kind hearted folk, then they became immoral monsters. Their development has strict beginning and ending points, whereas the house is always shifting and evolving as the story progresses. 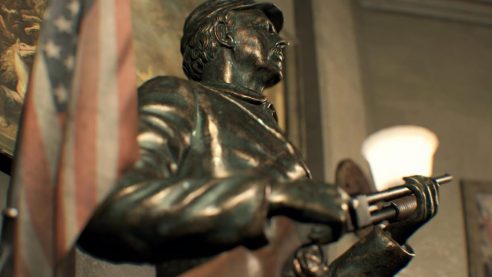 The pacing of Resident Evil 7 allows us to really get a feel for the house as a character. Once the main hall is unlocked, it is left to the player to explore until they find an item that allows them to progress. This inevitably results in a working knowledge of the layout of the house, from the recreation room, to the laundry room, the bathroom, and beyond. If we imagine each room as a different personality trait (the American soldier statue) or character flaw (the “incinerator room”), the house becomes the most well-developed character in the game.

Resident Evil 7 does an admirable job in presenting interesting human characters (except for Ethan), but it’s the house that stands out the most. The twisting halls, the moldy basement, the claustrophobic attic–each location adds a new trait to a complex personality. While they certainly shine in their own right, the Bakers could learn a thing or two from the character they call home.

My Three Year Quest to Suffer Through L.A. Noire