When you get right down to it, there are two kinds of people in the world. Those who have beaten the 2011 crime epic L.A. Noire and those who haven’t.

At present, I stand firmly in the haven’t category. However, my standing is not the result of a lack of effort.

Recently, I re-installed L.A. Noire for what I estimate is the sixth or seventh time in the last three years. Now, for those who can’t help but do single digit math in their heads, you’ll notice that’s it’s been more than three years since L.A. Noire came out. The discrepancy in the digits can be attributed to the fact that I waited a few years before purchasing the game through a Steam sale.

My hesitancy in purchasing the game had very little to do with its premise and pedigree. I generally trusted Rockstar published games and I’ve been in love with all things noir since I saw The Maltese Falcon as a kid. Instead, it was based on the game’s decidedly mixed reception and my hesitancy to spend $60 on a game that’s every notable feature came attached with a disclaimer. However, I was willing to spend $12 on that game.

The price may have been lower, but the flaws were just as prevalent as ever. Actually, it’s not the fact that L.A. Noire is flawed that bothers me. I’ve played and beaten many flawed games with redeemable qualities.

No, what makes L.A. Noire so uniquely frustrating is that it’s the only game I’ve ever played which seems to resent the things that make it great and love the things that it simply can not do.

L.A. Noire is a one-trick pony. That’s never a great thing to be, but it doesn’t hurt that Noire‘s one trick is a unique interrogation system that requires the player to deduce whether a person is lying through both evidence and facial recognition techniques. When coupled with the game’s love letter to everything noir, these interrogations and investigations really do make you feel like a hard-boiled detective in the simmering cesspool of 1940s Los Angeles. 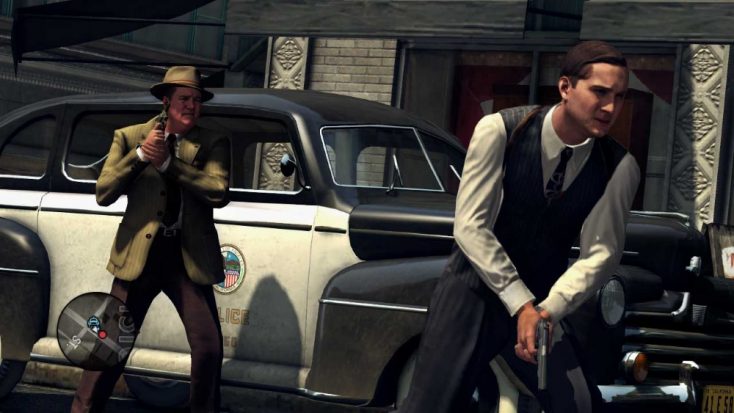 For reasons I will never understand, however, developer Team Bondi seemed to be worried that players who were drawn to this central gimmick would eventually become bored by it. To combat this hypothetical boredom, they implemented a series of shootouts, chases, and utterly bizarre story twists which become the predominant form of entertainment as the game progresses. It’s like if Rockstar incorporated a match three puzzle game towards the end of Red Dead Redemption, because “Hey, people like those, right?”

It’s a bizarre design decision that has always left me in a bit of a bind. The noir fan in me wants to finally beat L.A. Noire in order to soak up every last bit of atmospheric goodness. That, and the part of my ego which demands I finally best it. Time and time again, though, I come to that one painfully long, ill-conceived sequence that makes me realize that I’m in love with a game that has no self-confidence and desperately wants to be something else. A game that seemingly hates itself.

Sadly, I know that is going to happen again at some point. I’m going to give up on L.A. Noire only to come back after I’ve watched Chinatown for the 50th time and need to soak my soul in the game’s stunning environments, jazzy soundtrack and wonderfully hard-nosed dialog. We’re destined to do this dance forever because I don’t think that there will be another game that ever provides what L.A. Noire does at its best.

The French would call that relationship “amour fou.” Crazy love. Perhaps we all need a game in our life that provokes such reckless passion.

L.A. Noire: Across the Threshold