In 1883, the magazine The Chautauquan asked the famous philosophical question, “If a tree were to fall on an island where there were no human beings would there be any sound?” Through his game Shape of the World, Stu Maxwell answers a resounding “No.”

An exploration game in the style of Proteus, without the player, there is no tree at all. Only when you move through the environment do foliage, mountains and fauna spring into existence, before your very eyes. The effect is at once relaxing and exhilarating.

Maxwell worked for a number of years as a commercial art before transitioning to AAA games for Relic and Coalition nine years ago. Shape of the World is a side project, begun in 2014. Once Maxwell had a working prototype, he enlisted a few industry friends to help out: Brent Silk for sound and music and Athomas Goldberg for help with creature animation, while Ira Zhang and Sasha Katcher began contributing environment and creature assets, respectively, later.

Maxwell describes Shape of the World as “an eye-and-ear-pleasing exploration game . . . Like Proteus, but bigger and more interactive.” There is no release date for the game yet, but you can learn more on the official site or catch updates on Twitter @shapeoftheworld.

Maxwell took time out of development to discuss procedural generation, the rarity of stylized games and how to bring quiet beauty to videogames.

What spurred you to make Shape of the World? What inspired you?

S. M.: I loved exploration games like Flower and Journey, and stylish, whimsical games like Windosill, Pixeljunk Eden and 140. It wasn’t until I played Proteus that it started to sink in that I could make one of these games. I was getting proficient at Unreal Engine 4 and had good relationships with a lot of developers who could help in small ways.

At the same time, I was reading about explorers through history. I liked thinking back to times when societies had hard edges to their maps. What was beyond the barbarian village to the north? Nobody really knew – there were only rumors of strange people and beasts. People were just discovering the shape of their immediate landmass, merely guessing at the shape of the world. That’s not an experience any of us get any more. As a kid, before I had GPS on my phone, I would actually get lost. It can be a little scary but if you’re in a contained little world, like a huge hotel, it’s exhilarating. I wanted to get a bit of that feel in this game. To this end, I let the player freely explore but contain them to an arena that prevents them from completely wandering off and getting frustrated.

Why does the sensation of being a little lost appeal to us? Why do we find that exhilarating?

S. M.: Being lost, without worry of being found, is a kind of trance. Just happily wandering. I think it’s tapping into something base-level. Wandering aimlessly through a perpetually growing forest has the entrancing quality of staring at a fire or at ocean waves.

“Procedural” is a tricky word for games. How you define it for Shape of the World?

S. M.: The landscape has a predetermined design but the way it fills itself with trees, foliage and creatures is mostly procedural. This lets me control the player’s experience and pacing to a point, but when the player loops back on areas they’ve seen once, they look different. My hope is this lends itself to the goal of giving the player that great feeling of being lost, before they find themselves again and happily wander on.

The score is also procedural? Can you talk a bit about how that is composed and implemented?

S. M.: Brent first works with me to create 90% of a complete track before we put it in the game. The components are pre-made. However, he breaks it up into lots of segments and layers and they get mixed interactively in the game based on what you’re doing. For example, traveling across a boardwalk adds another layer to the music. Being in proximity to some monuments, or being underwater, modifies how the music is mixed. So it procedurally helps to score your personal journey through the world.

It is easy for the strange to appear threatening, but this world seem non-threatening in its alieness. How did you design with a mind to encourage exploration?

S. M.: The intent of everything is to give you motivation to go on and explore. Threats (in the form of creatures) kind of go against that logic and they also immediately create a barrier to entry for certain casual gamers. (one of the reasons I loved Flower and Journey so much is I could invite friends over who have little to no experience with games and they could actually play.) The longer I developed Shape of the World, the more I realized that we all take for granted the perception that games need enemies. The common wisdom is you need to die and respawn to have a game. I now realize that these are simply historical conventions – that’s how games started and since each game builds on the games before it, this convention continued to be recycled. Today it’s a staple of game design, but you know what? The idea that requires enemies that can kill you is a fallacy. It can be great fun to simply discover things and find your way forward.

The color combinations also strike me as unusual, akin to the palettes you might see in lava lamps, which imbues the game with a bit of the psychedelic. How did you choose the palettes and what was your intention behind them?

S. M.: The visual style of the game – using flat silhouettes and simple gradients but in a striking color palette – was one of the first things to come. I knew what I wanted it to look like before I started prototyping the game. There are two functions for a style like this. One, it’s obviously very appealing. It looks fresh and cool and pleases the eye. Two, it allows me to skip making all the detail that makes games very, very expensive to make. Instead of three artists, this game would need 30. And since detailed, realistic-looking games (any blockbuster title) are a dime a dozen while pretty, stylish games (Monument Valley) are few and far between, I wanted to sit in the latter camp.

You bring up an interesting point about the rarity of pretty, stylized games. You’d think that would be a strength of the medium. Why do you think they are so outnumbered by realistic games?

S. M.: That is a really good question and I wonder about it a lot. I imagine you could research a whole piece about this and I would be very interested in reading it. I can guess at a few contributors.

Certainly game studios are looking at the success of big movies and TV series for inspiration, so they mimic the style of live-action films. I do remember a time when games rarely set out to be “cinematic,” but with AAA games, it’s taken for granted that you’re going to be cinematic and you usually have a specific set of films you’re using as reference.

Photo-realism is also seen as a kind of measure of how contemporary and quality you are. If you want to prove you’ve got the “best graphics” you go for photorealism, since there are so many tricks to employ and so much content to make, that it signifies to the consumer that your game is also good.

Side note: I hate the term “graphics” and wish we just said “art.” What you want is to make your art very good, while graphics are just tools. You can make garbage art with elaborate graphics and great art with basic graphics. 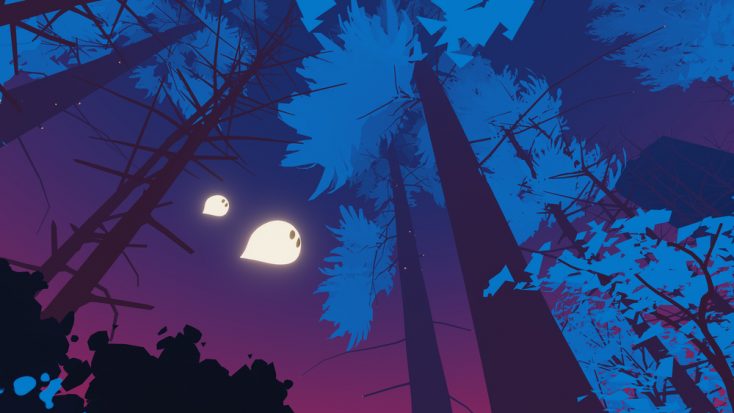 How does Unreal Engine help in developing a game like Shape of the World? Are there any unexpected benefits or challenges?

S. M.: Unreal is a phenomenal platform for developing this game. I did actually start in Unity but switched over once Unreal 4 came out. As a visual person, I prefer to use Blueprints over text-based scripting. Also, the material and effects editors are miles ahead of anyone else. As a VFX artist making a visual feast of a game, having immense control over the materials and particles was a strong factor in deciding to use Unreal.

What do you hope to accomplish with Shape of the World? How do you hope it will effect players?

S. M.: When I started this game, I had spare time on my hands. I enjoyed spending that time on relaxing things like yoga and bike rides through Stanley Park. My goal was to create a game that would allow you to go on a similarly relaxing journey. But I was at a point in my life where things were about to change. Within a few months of making a prototype, my wife and I decided to have a baby. I spent 9 months actively progressing the game, but when the baby came, my beautiful daughter Sage, development time was harder to come by. Having a baby is wonderful in so many ways, but first-time parenting comes with a dose of stress.

Amazingly, I still found time to develop. A young baby naps a lot and my wife often took Sage out to the park or a baby activity at the community center. It was during this year that my day job started taking more time and energy as well. While I originally wanted this game to be a relaxing journey because relaxing was fun, now I want this game to be what you come home to after a busy day of work. Relaxation out of necessity.