Love is, by its nature, unpredictable and unscripted. It doesn’t work as a narrative choice, defined and prescribed after a boardroom analysis of a videogame’s key demographic. Love can’t be used as shorthand for human connection. It isn’t quick emotional super glue. Love, as we experience it, is not just a happy stack of rainbows; it’s rough and improvised, something that needs to be fought for.

However, it can sometimes be created: I have felt love in a game, but not with a woman, or man, or anthropomorphized robot. Instead, it was in the silent garden gnome that spent most of Half Life 2: Episode Two grinning up at me.

He and I journeyed through hell. The actual story that Valve was trying to tell is now only a faint memory – Gordon Freeman pushing back against an alien invasion with the brilliantly realized Alyx and Dog, a fallen building, a car jump and doubtless many examples of Source’s delicious physics engine. For me, though, Episode 2 was defined and ruined by a random article about the game’s achievements. I’ve always had a weak spot for challenges rooted in changes to an expected play style. This achievement centered on a single garden gnome and carrying him to the end of the game. I had found the gnome, but until the article, I thought he was merely a curiosity. That was the beginning of our journey through connection, protection, manipulation and, finally loss. 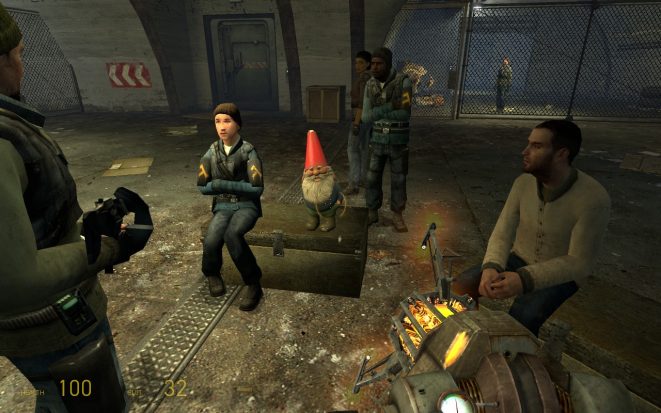 A regular rhythm established itself; each enemy battle began with the careful placement of the gnome in a safe spot. Once my weapon-wielding scientist nullified every danger, I collected him again. As we went on, our partings included a few comforting words; maybe some advice, perhaps a warning to keep his head down, but always a reassuring reminder that I would return.

As Episode 2’s challenges grew, so did the amount of effort put into his survival. Enemy confrontations required the planning of a route through their sections, especially those that were time sensitive or involved speeding with the gnome balanced on the back of a car. The game seeped into everyday life –not about how to solve the scripted puzzles, but rather what I had to do to drag my new friend through another frantic fire fight. The game’s enemies stopped being stressful and the story’s intricacies slipped into the background. Half Life became purely about Gordon Freeman and his gnome.

A particular environmental puzzle, certainly nothing that would perplex anyone familiar with the series, took a week of experimentation for me to solve. Its setup was simple: in a room, the exit door switch was faulty; in the yard beyond was a way to repair the circuit. Crawling through a tight vent gave access out of the control room to the yard, and, once fixed,the door opened up for a second to allow my companions to come through. However, it was not possible to crawl while holding the Gnome,so he stayed trapped in the control room. The game would have allowed me to continue my journey without a backwards glance.

Unfortunately, by that point, the bond between Freeman and gnome ensured this would not happen.

I spent every night for the next seven days in the yard, rooting through available resources for an inspired, MacGyver-style solution. The gravity gun meant I could manipulate and balance any loose object, with that fantastic physics engine giving just enough consistency to allow a strategy to form. Eventually, I had a plank of wood and a plan worthy of the greatest strategic minds: jam the door open and grab my gnome with the gravity gun.

It was a sound idea in practice, but even when correctly balanced,the door would only hit the thin side of the plank as it closed a second later, leaving an unusable gap. Each altered angle produced a slightly different result that crept closer and closer to the ultimate aim: have the plank rotate slightly as the door opened so its width would jam it open. I tried and retried slightly different angles, building a bank of data with every failure. A growing sense of self-doubt and desperation threatened to overwhelm until, without any warning, an angle worked. The plank flipped, the door jammed and the gravity gun scooped up my gnome just as the door slammed shut.

There may have been screaming.

By this point we had moved on from being merely carrier and passenger. I had fought and foiled the game’s physics engine to ensure we persevered together and, as a result, nothing else mattered.

The next challenge was to survive the bullet spray from an attack helicopter, in a buggy that couldn’t carry the gnome. I rudely catapulted him from point-to-point using the gravity gun with the speeding buggy close behind, each death showing a new area for avoidance. Once I finally reached the safe house on the other side, the sense of achievement turned into brash over-confidence. Working around a locked door and dodging a hail of bullets made me feel invulnerable.

So, when an NPC begged for help to repel a sudden attack, the gnome waited at the end of a corridor while I faced the immediate danger.

That was the last time Gordon Freeman ever saw his gnome.

An invisible wall had risen behind, placed over a step maybe three feet high. Beyond, the corridor and the dogleg corner that led to my waiting companion lay tantalizingly open, but no manner of jumping, shooting, blasting or any other kind of physics manipulation allowed me access. A horrible realization grew: it wasn’t a quirk of the engine at play here – that could at least have offered hope for manipulation. Instead, this was the level designer deciding that it was time to move on to the next area and the doorway back slammed shut.

The gnome was gone. An NPC shouted to get back in the car and continue, but it was no use. With a numb heart, betrayed by something that unseen, I turned off the console.

I left Half Life 2: Episode Two uncompleted ever since. I once saw a video of the completed achievement, the gnome finally finding his home in a rocket before blasting up to the stars. The game remains on the shelf, ready to restart, but my motivation to do so has disappeared. So my gnome still sits and waits in the sanctuary of the safehouse, frozen in time in the middle of a story that had stopped being important. My story became about him and so ended with our separation.

The bluntness of this separation lends the final proof as to why I’ve always felt scripted love to be so hollow – instead of the overused saccharine idealism, real love has spikes. It is proven through losses as well as gains. The struggle balances with occasional bliss and, sometimes, every shared moment of simple survival is enough.