A simple song can make or break the most important moments in a game. Games are already weird little intersections of film, theater, literature and agency driven fiction so the music in them can completely change the chemistry of a game. Music can be a powerful tool. When used correctly.

For example, early in Mafia III everything goes to hell to the Rolling Stone’s “Paint It Black.” Your base gets burned. Your friends are murdered. You get shot in the head. It’s a complete and total betrayal on a level I’ve never seen before. It’s perfect. That is, it’s perfect until you watch that same scene without “Paint It Black.” Without the driving rhythm, twangy sitar, urgent drums and crooning vocals, the betrayal scene loses all its power.

Suddenly, a scene that felt fresh, brutal and raw is rendered impotent by stripping out just one song. That may seem harsh, but remember at this point there’s been little time for the player to bond with all the people who die at the betrayal. The people who betray you aren’t your friends, you hardly know them. Lincoln Clay knows them but the person sitting on the other side of the TV only has to sit back and voyeuristically be taken in by Mick Jagger. The real betrayal is that I loved it so much the first time only to discover its toothlessness.

Contrast this with Red Dead Redemption’s usage of Jose Gonzales’s “Far Away.” To get to Mexico, where the song plays, you must first get shot, have a rancher nurse your wounds and develop a bond with you, work with a U.S. Marshall, a grave robber, a snake oil salesman and eventually overthrow the fortress where you got shot. Then you find out that the guy you needed to capture has left. For Mexico. A while ago. 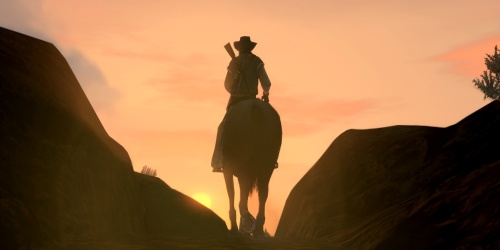 It’s a taxing journey with memorable characters punctuated by the protagonist making questionable decisions, explaining his plight and getting deeper and deeper into the mess he’s found himself in. When you finally do cross into Mexico you’re greeted by a song of longing and pain.

It’s a quiet moment of introspection where nothing happens except to let the first act of the journey wash over you before seeing how far the rabbit hole goes. Even though you’ve never been closer to catching Bill Williamson and seeing your family again, you’ve never been further from your goals. Now, in Mexico, lost and alone but for your horse and your gun you must find your way.

Original songs add even more power to moments or themes. The other day, someone reminded me that Rise of the Tomb Raider had a pretty banging Karen O song. “I Shall Rise” is about perseverance that fits beautifully with the game’s themes. “Still Alive” (either one) does an amazing job not only of grounding the themes but also the texture of the game.

The work of Darren Korb also stands as a testament against lazily drafting in a song to reinforce the visuals. Without Korb’s work Transistor and Bastion might never have been so memorable.

As people shuffle off to the “Game of the Year” voting booths we should reward not just original songs but the usage and impact of all songs. We should look at soundtracks and soundscapes like we look at words. It’s not use the tones, the words, or the beats but giving real thought to what in a scene is doing the hard work of making us feel and react.

The Year of the Secondary Character