Thanks to countless movies, the allure of the gunfight at high noon is encoded into most of our brains. The dusty street, abandoned but for the tumbleweed. The two opponents, one in black, the other in white. The tension. The stare down. The titanic battle between good and evil, boiled down to a flick of the wrist, the pull of a trigger and a bullet (or two).

You’ve seen it a million times before, right? So have the developers at Lunar Rooster. That’s why they decided to spice it up by making a game about gun fighting on islands in the air. With grappling hooks. That game is Sky Noon.

A hybrid of the first person shooter and the brawler, the first thing you’ll notice is that your guns aren’t lethal. At least not directly. Instead of bullets, they blast out air: the better to knock your opponent into the void. Once you’ve taken leave of the ground, you have to use your abilities and your grappling hook to swing yourself back into the fray, or plummet to your doom, which makes Sky Noon a frenzied game of speed, momentum and, above all, positioning.

The first large scale project for the Auckland, New Zealand, developers, Sky Noon is aiming for release this year on Steam. Project lead Craig Taylor took time out of that busy schedule to chat about the game and just how hard it is to design a good grappling hook. 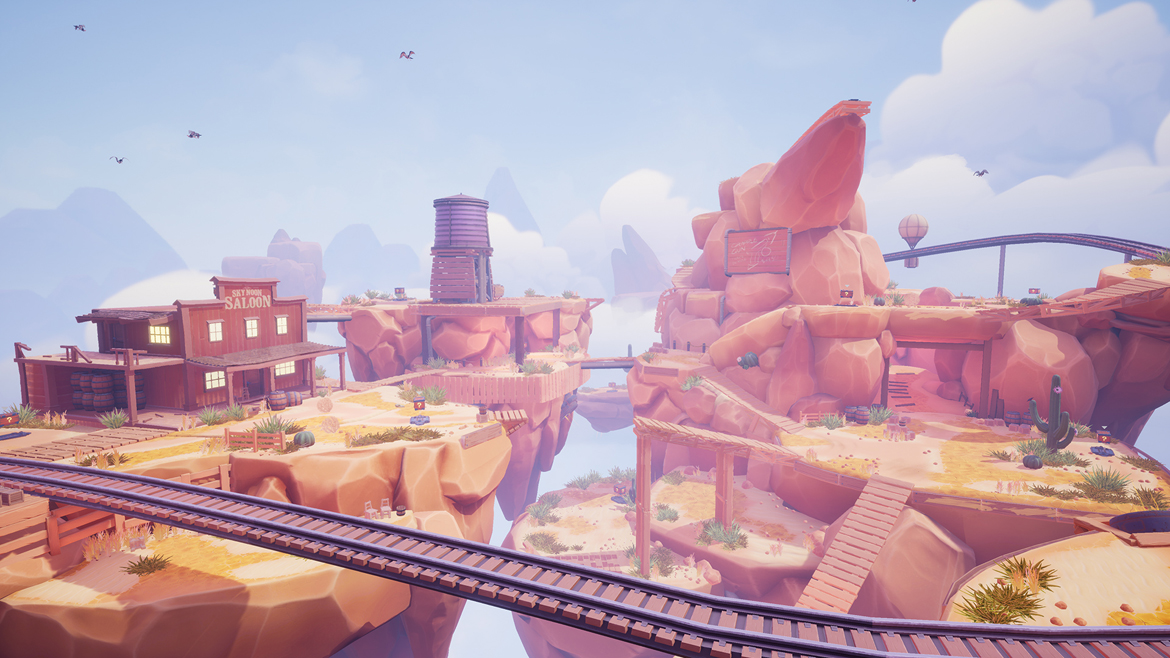 Sky Noon looks bonkers. How did you get to the point of grappling hook-wielding sky cowboys? Was there an evolution, or did one of you just wake up with divine inspiration one day?

The idea of Sky Noon started out as a chance to do grapple hooks right. Back in 2016, which we called the year of the grapple hook, we saw other games use grapple hooks as smaller mechanical flourishes adding to their games. We wanted to make a game around grappling that gave a proper sense of speed, control and general badassery. Branching out from that single idea, we iterated on ways to use the grapple hook to its full potential, eventually deciding upon Smash Bros’ style knockback mechanics to complement the grapple hook.

The inspiration for the Western theme came about from a couple of our developers having an appreciation for the old Spaghetti Westerns. In the process of thinking of themes a Western seemed like a genre that is underused in games and could be an interesting mashup with grappling and floating arenas.

What games inspired Sky Noon? I detect a strong visual influence from Dishonored and BioShock Infinite, for instance.

The team was greatly influenced by the games we had played and were playing at the time. We enjoyed the polish and art style of Overwatch, the speed and fluidness of Titanfall and the beautiful visuals and gameplay of BioShock Infinite and Dishonored. We looked at what these games did right and how they created a satisfying first-person experience, then applied it as best we could to our idea of Smash-style FPS combat. 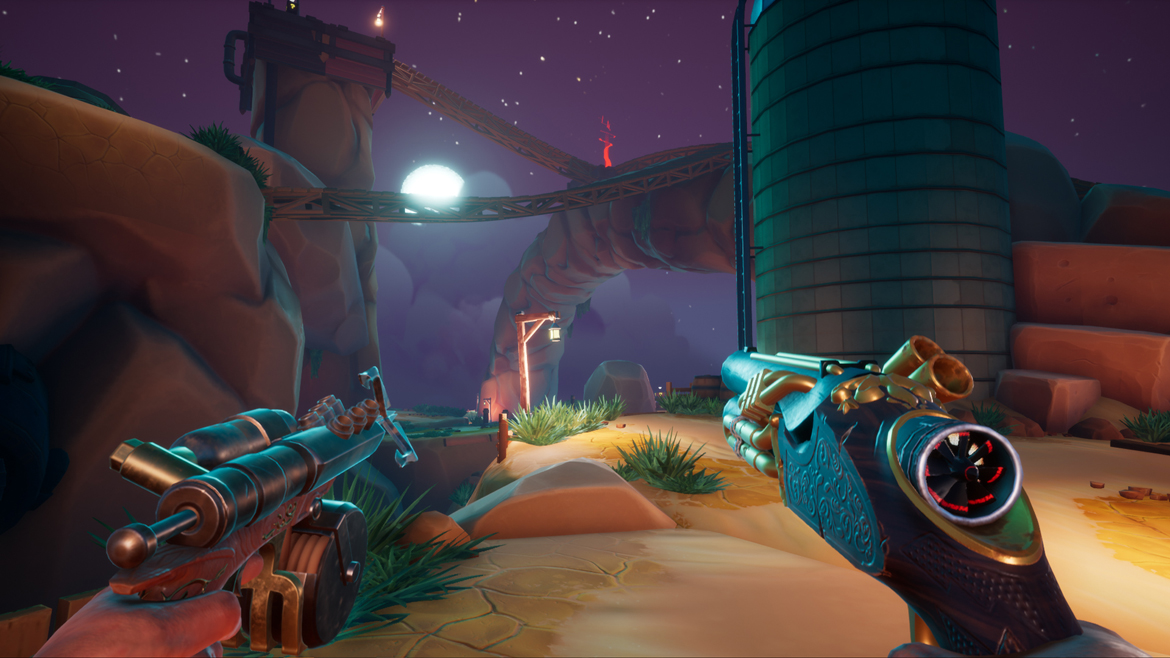 The grapple gun is obviously the game’s main weapon and it seems to make the game extremely vertical and unpredictable. What was your intention with it and what are some of the parameters for how it works in a design sense?

The grapple hook really took center stage in development. A lot of the development went into making the grapple hook feel and function the way we felt it should. Primarily, we wanted players to feel their momentum and change it at will, giving them a sense of exhilaration. This idea, while grand, came into conflict with some of the realities of game development, primarily usability.

Throughout early development we went through many iterations of the grapple, some super realistic and some contrived. We settled on two main types of grappling: Point-to-point, where a player is moved precisely towards the grapple end point; and Swing, where a player maintains their momentum allowing them to swing around the grapple end-point. When a player grapples, we evaluate their position and momentum to switch and blend the two grapple types. This method gives low-skilled players the tools to navigate the vertical environment while allowing advanced players a way to quickly navigate, not unlike Quake bunny hopping.

Despite the fact that I guess you fall to your death when you are knocked off the islands, Sky Noon’s arsenal is pretty non-lethal. How did removing health change the game’s dynamic?

It was very early on that we decided weapons would not kill directly, opting for the Smash-style knocking off the map combat. Initially we played with health as a stunning mechanic, where upon taking enough damage the player would be temporarily disabled. We found that this was highly detrimental to the experience as losing control in a fast FPS just feels bad. Therefore, we removed all forms of health, always giving players direct control of their character.

It’s a huge shift in what you expect from the typical shooter. You have to expect that every weapon and ability will be pushing the opponent away, so having the high ground isn’t really an advantage anymore. Shooting someone from a high position is less effective than shooting them at their level or even from below. Perhaps you picked up some dynamite or a cannon, so you can send them flying by aiming for the ground next to them. This leads to longer, more involved duels between players in which they may trade blows while grappling in and out of view. It’s an interesting twist that places an extreme emphasis on the positioning of yourself relative to your enemy. 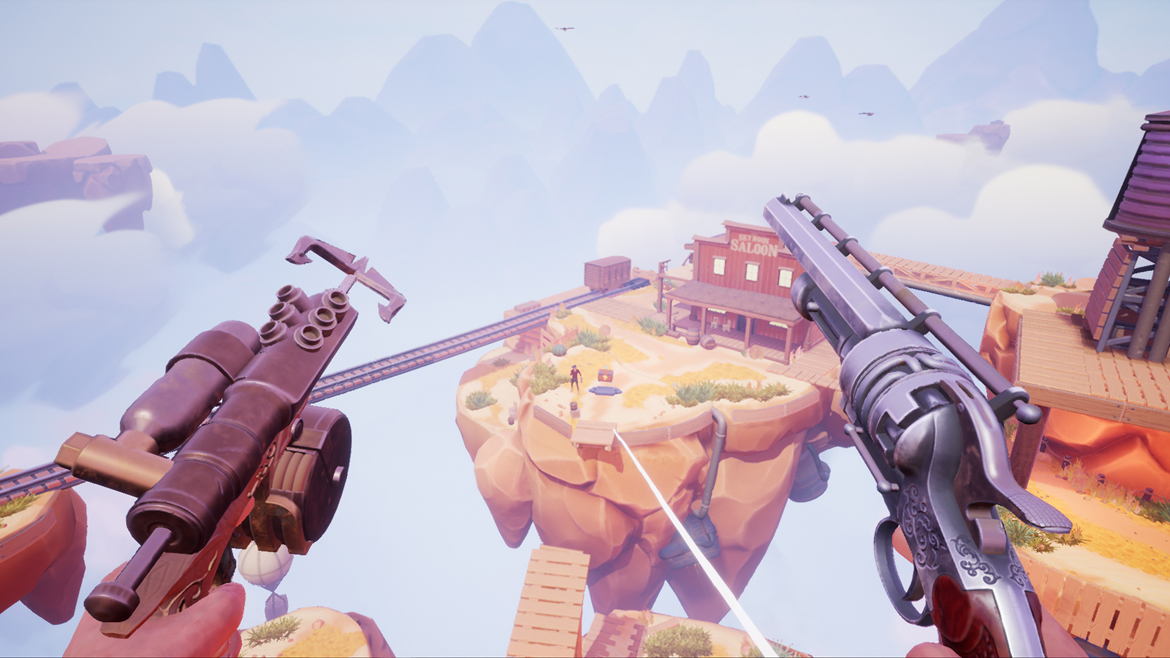 Play sessions look crazy fast and surprising. How do you go about playtesting and balancing the chaos?

When starting out we decided on two main design tenants to use when balancing our weapons and abilities. Firstly, weapons must fill a specific role/range. Secondly, all abilities should have a dual use as both a means of attack and a means of saving the player from being pushed out of the level. With these ideas in mind, we have weekly internal playtests examining how medium-to-high skill players use or abuse the weapons/abilities. Then about once a month, we gather people for external playtests to examine how low-to-medium skilled players fare.

One balance problem we have faced was with the Booster ability that rockets the player forward a distance and creates an explosion on contact with the ground or another player. Due to the nature of the game, players were reluctant to use the Booster to attack other players, choosing instead to keep it to save themselves later. To combat the effectiveness of the Booster, we ended up extending the cooldown, while also drastically reducing the cooldown if a player manages to hit another player, incentivizing a more aggressive playstyle.

Initially we started using Unreal because it was the engine we were most experienced in – both of the programmers and one of the artists had used it on previous prototypes, which helped us get our bearings. On the programming side Unreal was preferable to Unity because it used C++ as the language, which we had experience in. It also allowed us better access to the source code of the engine.

One unexpected benefit of using Unreal is just how easy it is to network in. We had a working prototype of Sky Noon up and running in a very short amount of time.

The Unreal Dev Grant was a crucial factor in helping us get to PAX Australia and showcasing our game as part of the indie showcase. It will also be used to help offset server cost looking towards launch.

For more information on Sky Noon, check out the development blog and follow the developers on Twitter @LunarRoosters