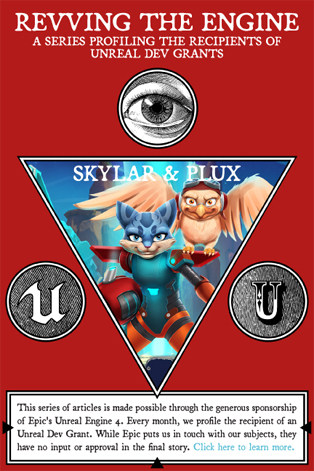 This story is a reprint from Unwinnable Monthly #91. If you like what you see, grab the magazine for less than ten dollars, or subscribe and get all future magazines for half price.

What happened to all the 3D platformers? They were everywhere, crowding the shelves of game stores and then, for 15 years, they vanished. Now, as the generation of players who grew up on them start to graduate game development programs, the 3D platformer is poised to not only return, but to enter a renaissance.

The result is just around the corner. Skylar & Plux comes out on May 19 for Xbox One, PlayStation 4 and PC. Despite being so close to release, level designer, narrative designer and Right Nice Games co-founder Eric Valentine took time to chat with us about the cat and the owl who are leading the 3D platformer revival.

What made you want to revisit the open world 3D platformer?

The genre probably had to die out when it did, considering everyone and their grandma were releasing a 3D platformer back in the day, saturating the market and watering down the quality of the games. But we never forgot the fun of those games. A hunger for that fun has been brewing for the last 15 years or so, but most of the developers who defined the genre have moved on to other things. We saw an opportunity to satisfy this craving ourselves.

The genre still has more to offer. The big indie-boom of recent years proved that beloved game design and dead genres can come back to life again. During development, we saw that many others had the same idea and we’re seeing a 3D-platformer renaissance, which is very exciting!

There’s some obvious homage to previous games in the genre (Ratchet & Clank, for example). Can you talk about how they inspired you and how you built on what came before?

We stand on the shoulders of giants. One of the most important game series for me was the Jak and Daxter franchise. When I prototyped the movement and abilities of our protagonist, Jak was what I went for. You can see Ratchet & Clank and Super Mario Sunshine’s F.L.U.D.D. in our jetpack gadget. Of course, we have fine-tuned, remixed and reinvented these mechanics to fit our purposes and tastes.

It’s kinda funny how most people assume Ratchet & Clank is our biggest inspiration, when the game itself plays more like Jak and Daxter. I guess it’s because we share that futuristic sci-fi theme. But we try to get inspiration from all sorts of sources, art-wise from Wildstar, Rime, The Witness and Wind Waker. Theme-wise from Ratchet & Clank, Star Wars, Zelda and much more.

Dual protagonists are a staple of the genre. Can you talk a bit about how you approached designing them? How do they overlap and complement each other mechanically?

Before Skylar, our protagonist was a little robot looking dangerously like Clank. When we started our company and the game was going to be announced, we wanted to come up with something else. We felt that the genre had been a little bit of a boys club, so we decided to go with a female protagonist. We settled on a feline design that expressed the most emotion and the rest is history.

As for Plux, we wanted to make a companion in the vein of Daxter. Skylar is the silent protagonist that the player could identify with, but for storytelling purposes, we needed a voice and a counterweight to our bombastic villain, CRT. I’ve always been a fan of those darn cute mini-owls and the silhouette would be very ball-shaped, which is convenient for development reasons. Thus, Plux was born.

A cat and an owl make for an odd pair, no? What’s the story behind the characters?

They do and I love it. Odd pairs and weirdos are soft spots of mine. When we started out making the game, we felt like we were taking on the world. It’s been an uphill battle the entire ride and that influenced how I wrote the characters. They are underdogs trying to confront a bully and stand up for those who can’t. Skylar’s background is a mystery, she’s at a crossroads in her life, unsure of who she really is or should be. Plux is afraid of letting go of the past, which keeps him from finding a home and a purpose for the future. Sometimes we don’t really fit in, but that’s okay. There are other oddly shaped puzzle pieces out there that may just become your best friend.

More and more, nostalgia seems to be a key component in game development. What is it about nostalgia that appeals so strongly, both to you and to players?

It’s the longing for a much simpler time, I think. When you were a kid, you could invest your time in videogames on a whole different level. It taught you new skills and you immersed yourself in those worlds. Adult life has you focusing on so many things at once that you can’t let it all go. Games now aren’t what they used to be, largely because you can’t play them like you used to. But new games that remind you of your childhood will have that immersion factor rubbed off on it by looking, sounding or playing like the old games. Nostalgia is personal, but our generation enjoys the collective nostalgia of this genre, which I think makes it so powerful.

Back when 3D platforms were in their heyday, large teams developed them. You’ve only five people working on Skylar & Plux. Can you speak to the challenges of being a small team? Is there anything about your production that is key now but didn’t exist then?

There have been many challenges. Most of all is that our team spread out between many different tasks, it’s hard to dig deep into the features we want to create. We all have to wear multiple hats. It’s also difficult trying to develop around our shortcomings and make it work despite of what skills the team lack. For example, we don’t have a dedicated animator. Which means we’ve had to outsource the animation work to our dear friends from school. We’ve had a lot of help from our talented friends, which is the reason this game got made at all. I think this sort of project wouldn’t have been possible in this time frame ten years ago. The fact you can start developing this kind of game after three months in Unreal Engine is a luxury.

How does Unreal Engine help in developing a game like Skylar & Plux? Are there any unexpected benefits or challenges?

The Unreal Engine has been invaluable to us for making this game. Just the speed alone at which we can prototype mechanics and test level design ideas is a huge benefit. Over 95% of Skylar & Plux is scripted using Blueprints, which personally is a lot easier to get into than traditional C++. No other engine comes close to how much easier the life of a level designer gets with its large amount of tools and neat features.

Unexpected challenge? Unreal Engine has a lot of tools and sub-editors. A LOT. Depending on the kind of game you’re developing, it could be encumbering to manage all the things this engine has to offer. But with time and a helpful community it has worked out great for us.