Today I heard some great news. An old friend and longtime struggling screenwriter was finally seeing something he had penned go before cameras. This isn’t some student film, either. It’s an honest-to-God production with real stars. I read the script when he was working on it and it was funny as hell. That was years ago, but Jeff never gave up. He hustled specs, worked side jobs, collaborated with producers and kept his head down and his keyboard warm until something finally clicked. Trying to make something happen in Hollywood is the epitome of the uphill battle. It’s like David fighting Goliath on a Crisco-slick mountainside.

I’ve said before that it’s a miracle that your favorite movie, game or cultural widget ever got made. There are a million things going against every creative person with a whit of imagination or spark of life. Many of these roadblocks are thrown up by commerce. It costs a lot to make entertainment widgets and it costs just as much to take out those ads to trick people into consuming the widgets. So there are all kinds of gatekeepers between you and the people who make the stuff you love. Those people run movie studios and game publishers. They own movie theater chains and cable networks. And, for the most part, they don’t think that the stuff you like will sell. And the way the rules are written now, they’re right. Movies like Attack the Block and games like Brutal Legend are too beautiful, too awesome to live. The crazy thing is that these movies aren’t even great, challenging art! They’re no 30-hour experimental films about a guy sleeping. They’re fun, joyful entertainment, but studios don’t know how to sell them. People don’t know that they want to watch them until it is much too late. For the most part, stuff like this doesn’t get made.

But that was the way things used to be. Another really great thing happened this week. Double Fine, the developer behind Brutal Legend, set up a Kickstarter fundraiser to produce a old-school, point-and-click adventure game made by veteran designers Tim Schafer and Ron Gilbert. The game met its funding goal of $400,000 in an evening. It set Kickstarter funding records, exceeding its goal by over $600,000 (as of this writing). Don’t let the naysayers fool you. This is an incredibly encouraging development not only for people who love videogames, but for people who love any kind of entertainment. Because most every creator you love struggles to get his or her projects off the ground.

It has long pained me that directors like David Lynch and Alejandro Jodorowsky fight so hard to get movies made. Granted, these guys don’t make blockbusters, but there are enough weirdos in the world who want to see what those directors would put on the screen if they had the money. I love to hear stories about people like Sam Raimi hustling dentists for the investment dollars to fund The Evil Dead, but what a rotten way to make movies. The problem has always been that there aren’t enough imaginative investors writing checks to fund these movies and there certainly aren’t enough weirdos sitting behind those fancy desks at movie studios. It turns out that we don’t need those people any more. Those middlemen are over. Or at least their jobs are in extreme jeopardy. Or possibly they’re going to keep their jobs making big stupid crap that stupid people like. Whatever way it pans out, we, the people who like strange, offbeat stuff, won’t be at their whims anymore.

The rise of Kickstarter funding will also mean that creative types will have fewer and fewer money men looking over their shoulders as they work. They can keep their focus testing and script notes. They’re no longer needed. Creators need only please their fans and deliver what they promised. Even that can be a challenge, but I find it very encouraging that creators won’t have a few, powerful voices influencing the way they work. 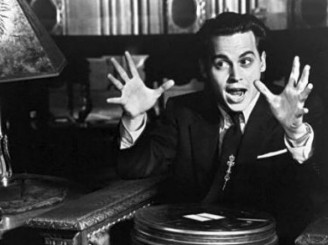 Kickstarter is just half of the equation, though. I believe that fairly open and flexible platforms for selling games, movies, music and other entertainment widgets are an important part of the formula. And the cool part about places like Steam for games and Bandcamp for music is that they’re freeing creators from one of the hugest limitations of commerce – format. See, part of the reason why Tim Schafer couldn’t just walk up to EA and get them to fund and publish an adventure game is that their business model for games is way too old-fashioned. They’re still, for the most part, stuck selling $60 discs. And there’s no way you could fill a disc with enough point-and-click adventure game to make it worth sixty bucks. Or you could. But, man, would that game be long and boring. For a minute or two, Xbox Live and PSN seemed like the answer to this problem, but Microsoft and Sony kept too tight a rein on these platforms, making it extremely difficult to make games for them and then doubly difficult to make your money back. Wisely, Valve has allowed its platform for selling PC games  to remain extremely flexible. Games can be as big or small as they need to be. And prices can be anything from a buck to sixty.

Have you ever thought about how much commerce has shaped the art you love? Movies are two hours long because that’s about how long a person can stand to sit in a strange seat. The length of music albums has long been dictated, not by the desires of the musician, but by the limits of the technology. The CD hemmed the length of the single-disc album in at 74 minutes. Vinyl and cassette did the same. And record albums exist, not because musicians compose songs by the ten, but because record companies realized that you could get people to buy nine songs they only sorta want in order to get one song they really want. The album format (considered an art form by many) is really just  an up-sell – your favorite single Supersized.

Digital formats and open sales platforms are freeing creative people to make art that fits their vision rather than art that conforms to outdated rules and formats. I dig that I can go to Bandcamp and buy a two-song EP by a bizarre black metal band for four bucks or pay nothing for a full album from another band. One artist may choose to send me a duplicate copy of the album on cassette while another includes a T-shirt. The possibilities feel wide open. Tim Schafer’s huge success on Kickstarter is encouraging for games as well.

I can’t be the only person on the planet frustrated with the fact that Richard Garriott has been stuck making Facebook poker games rather than the follow-up to Ultima that everyone wants, but the people with money think that Facebook is the place to clean up. That’s why you see creators of all the games you loved back in the day starting social game companies rather than making the games that are in their wheelhouses and our hearts.

Sure, Kickstarter isn’t the ultimate funding solution. Tim Schafer was able to raise wheelbarrows full of money because many, many people love the man and the games he has made. Kickstarter won’t work miracles for lesser-known creators. But it will let the consumer make the call. Where before ideas died in meetings, crushed by the whims of money men, now they are being communicated directly to the people who could potentially consume them. Never before has the notion of voting with your entertainment dollar felt more like direct democracy.

I don’t think Kickstarter was the answer for my friend Jeff – the guy who is finally getting a movie made after years and years of struggling. And Kickstarter isn’t going to let a first-time videogame developer make the next Call of Duty either, but that’s because we’re still stuck in the old way of thinking – that movies have to be so long or that games have to have so much gameplay. Kickstarter is most certainly not the answer to every problem facing artists with offbeat ideas, but it is a sign that things could be getting easier for them. It is most certainly a sign that people who love weird, not-so-marketable stuff are going to be way better served in the near future.

And that’s because we don’t have guys in suits standing between us and the people who make the stuff we love. From here on out we’re the ones in the suits.

Pretension +1 is a weekly column about the culture of videogames and the way they intersect with our lives. Follow Gus Mastrapa @Triphibian on Twitter.