Gus is a little busy with something this week – we are sure there will be a column about it soon enough. In the meantime, we present this vintage Pretension +1, originally published at Joystick Division, as an unsubtle hint as to the nature of Gus’ absence.

I’m not the kind of guy that needs music recommendations. I’ve got a storage closet full of CDs, a hard drive full of music (iTunes says around 215gb) and an RSS feed brimming with music blogs desperate to turn me on to new sounds.


It took two different videogames to pull the cobweb from my ears turn me on to the glory that is Judas Priest.

I’m a music snob. I spent most of my twenties absolutely sure that my taste in music was exquisite, only to discover in my thirties that every avenue of musical exploration I had dismissed held a treasure trove of sonic gems. Eschewing the predictable midlife obsession with sports cars, I opted to re-connect with heavy metal – the soundtrack of my teenage years and a genre I’d wrongly assumed that had gone fallow.

I retraced my steps, ripping my old Metallica CDs and seeking out new outfits like Mastodon, Early Man and The Sword.

I never in a million years thought that a videogame could turn me on to new music. My knowledge of music was supposed to be encyclopedic, impeccable. It turns out I’ve long suffered from a major, musical blind spot. It took two different videogames to pull the cobweb from my ears turn me on to the glory that is Judas Priest.

I’m not entirely sure why I never fully appreciated Judas Priest. I was in high-school in the late eighties – right around the time when Metallica was in their prime. Thanks to metal bibles like RIP I knew the score on the New Wave of British Heavy Metal. I understood the importance of those bands, but Judas Priest seemed like music for old people.

I remember, as a kid, being terrified of KISS. When I finally listened to them, I couldn’t believe how tame they were. From the looks of the band I assumed that their music must have been the most unholy filth ever devised. 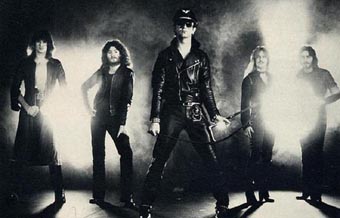 Priest, on the other hand, always seemed to live up to my expectations. Their music seemed mature compared to the moshy stuff I was listening to. Halford’s croon sounded dirty and jaded.

At sixteen I was uncomfortable with both. Besides, Priest was the domain of all the scary, old heshers I saw at South Florida rock shows. I figured they could keep their Autograph and and Ace Frehley’s Comet. There was plenty of new thrash to keep my head banging.

When the band was taken to court in 1990 after a pair of troubled teens from Reno, Nevada, decided to look down the barrel of a shotgun after listening to Priest’s cover of “Better By You, Better Than Me,” I wrote a paper on the subject for a community college class.

My research into the sordid affair left me all the more wary of the band’s music, but not because I believed that the band truly influenced those poor souls into their desperate act. It was about association. I wanted nothing to do with those kids and their troubles.

By the time Harmonix offered Judas Priest’s 1982 Screaming for Vengeance as a full-album download, I was well into my re-discovery of heavy metal. Never having heard the record I volunteered to review the entire hunk of DLC for Paste magazine.

I sprung my assignment on my friends at a Rock Band party held in a remote cabin in Northern Wisconsin. It was late at night. The session was winding down. Everyone was properly lubricated. I started screaming “Electric Eye” and howled until my pipes and playmates gave out.

The piece I wrote for Paste remains one my favorites – a short, weird hybrid of a record review and a videogame review. By bellowing Rob Halford’s words, I instantaneously gained new respect for the man. But even this wasn’t enough to inspire me to buy a CD or download a song. 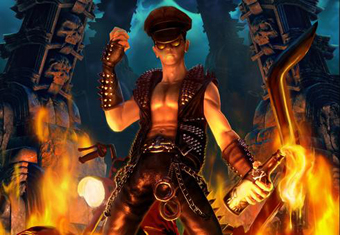 It was Brutal Legend, Double Fine’s heavy metal epic that pushed me over the edge. Maybe it was the choice to use “The Hellion” as background music in the game’s menus. Or the clever casting of Rob Halford as not one, but two devilish characters. Once I’d won my last stage battle something clicked. Tim Schafer’s clear-eyed nostalgia and un-conditional love won me over. Soon after I downloaded Screaming for Vengeance from Amazon and a love affair began.

As an adult, the band spoke to me in a way it never quite did a decade or two prior. Maybe its all hindsight. Knowing that Halford was in the closet when he sang “Hellbent for Leather,” certainly adds a layer of complexity. You can hear it all in Halford’s voice and lyrics.

When I was a teen, I found Priest impenetrable for its maturity. Now, I look at Halford’s somewhat clichéd songs of longing, lust and disappointment and see them as unvarnished expressions. The songs are beautiful in a way that might only be evident to a man looking back.

Now, nearly a year later there’s a copy of Stained Class permanently lodged in my Honda’s CD player. My wife, too, has taken a shining to the band. Every time I climb into her car, I find she’s been listening to their career-spanning Metalology box set.

I’ve always given a ton of lip service to the power of videogames like Rock Band as a tool for discovery, but I was always talking about the proverbial kids – the tasteless, uninformed youth with their emo haircuts and mall-bought skatewear. It turns out that no matter how old we get get and how cool we think we are there’s always somebody cooler, somebody with better taste.

The cats at Harmonix and Double Fine served, if only momentarily, as my arbiters of cool.

And every time I hear Rob Halford’s banshee scream I pause and thank them for hammering through my defenses and turning this old man on one last time.