The joke Pippin Barr is making with Let’s Play: Ancient Greek Punishment is no big mystery. Sisyphus’ rock will never stay up that hill. Prometheus is doomed to have his liver pecked out by birds ad infinitum. Players are powerless to take any action other than that of their condemned Greek avatar. You can never win! Very funny, Mr. Barr.

Barr has a knack for making divisive experiments like this. The Artist Is Present drew all sorts of attention upon release for being a game about spending hours waiting in line, in real time, for an exhibit at the New York Museum of Modern Art (the kicker being you could only wait in line during the museum’s real-life hours). 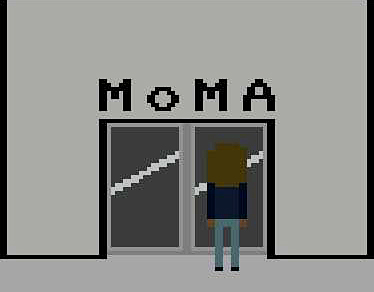 All’s Well That Ends Well pits you against an impenetrable object-swapped barrage of projectiles. You can only win by inching closer to your goal as the corpses of your inevitable defeat pile up. Whether the intentions here are completely didactic or not, interactive exercises in gameplay abstracts like futility or monotony should probably be taken as statements on game design.

In the case of Greek Punishment, Barr’s gone a step further. Without any semblance of progression, what’s here isn’t really a game. That much is obvious. Yet the implicit subtext that comes out of its non-game state may not be.

If it weren’t for Greek Punishment’s absurdity – yes, that absurdity, the same that defined Camus’ own essay about the myth of Sisyphus – I might not have eventually realized that what authentically separates any “game” from something that isn’t one is the presence of engagement. A vested interest provides an incentive to keep playing; without Nathan Drake’s Latest McGuffin and the Globetrotting Quest To Find It, would we want to fly by the seat of our pants down the path of a pulp adventure yarn?

If you don’t care about Uncharted’s story, maybe you’re crafting your own narrative in every violent action that occurs when you line up the reticule and hit the shoulder buttons. Strip it down again and you could just be happy mercing other players in multiplayer.

Maybe you’re not playing Uncharted at all, instead content to form the same sort of experiences with Gears, Mass Effect, Call of Duty or whatever your preference may be (as gamers, we all live to shoot stuff, anyway). The point is, the structural, aesthetic or narrative elements of design are all present, allowing you to shape a personal experiential concentration.

Greek Punishment’s absurdity is that, just as Camus said of Sisyphus’ condition, it’s an unending struggle without hope of success. In design terms, it’s a pro-forma commentary on the importance of structuralism; it lacks that crucial incentive. 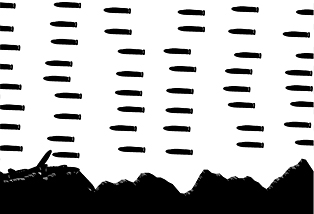 If somehow you stumbled upon Greek Punishment completely independent of any mentions it’s received elsewhere, the boisterous sarcasm in Barr’s own description for his creation essentially still tells you as much. So, anticipation here stems more from curiosity than the expectation of enjoyment. (Admittedly, a premise like Greek Punishment’s can also have an almost Pavlovian reaction in analytical gamers – many of us will have a hard time resisting its siren song, regardless of knowing with reasonable certainty what we’re getting.)

Unsurprisingly, the rote repetition promised doesn’t disappoint. Four of the five Greeks’ punishments are carried out by alternately Track & Field-ing two keys on the keyboard, while the last, Tantalus, can either attempt to drink from a disappearing water source or reach for an out-of-reach fruit-bearing bough by respectively tapping on one of the aforementioned keys. (Spoiler alert: It’s boring.)

Even if you’re aware of the backstories for the Greeks enduring their punishments, Barr denies you any chance of immersion by presenting a group of systems that are fundamentally unsolvable. The actual myths depicted aren’t important except to introduce the theme of punishment itself – each character’s level is presented simply as their name at the title screen, with any narrative references reserved solely for providing control context to the on-screen action (e.g., “Rapidly alternate the “G” and “H” keys to writhe in pain and dislodge the eagle!”). Doing just as the game asks doesn’t inspire players to care about the actions they’re performing, it just irritates because there’s no win-state.

That’s the difference: Greek Punishment’s unfinished design coda inherently reminds us of how important engagement is to gameplay. Theoretically, if the programmers pulling the strings for the King of All Cosmos didn’t at some point cut off the Prince’s katamari through a set of arbitrary rules like time or size limitations, you could keep rolling forever. The act of rolling the katamari, once so ridiculous and fun, would still be the same, but without the incentive value provided by those limitations it would eventually lose all significance.

Archaic as they may mechanically be, the old-school design in arcade games works on the same principle. There’s not really a greater narrative or aesthetic value to discover in the logical masonry of coin-op design, so a player’s engagement becomes something more contextually reactionary. When I play Galaga, there are a handful of conditions I must address sooner or later: Am I focused? Have I captured a second ship and if so, am I doing a good job of protecting it? Am I far enough in the game to be concerned with the speed and ferocity of these dive-bombing death-bugs? 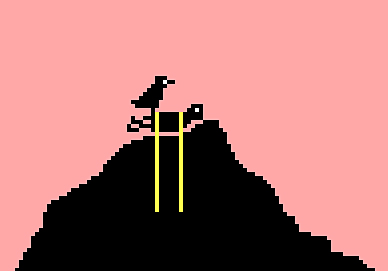 Of course, cabinet games leave little room for user error and are just as concerned (if not more so) with how well you can keep your mental composure. The psychology behind your reaction to Ms. Pac-Man isn’t rooted in the whirlwind romance with her paku-paku beau (though it is worth noting that the developers bothered with that shred of story-related impetus); it’s in how the game speeds up, the changing level layouts and the personal narrative of close scrapes and high-scoring tricks you write each time you play. The often multi-faceted engagement of modern games reverts to an experiential solipsism.

Without the illusion of progress from tracking scores or level-climbing records, Ms. Pac-Man would just be a yellow blob in a maze, your Galaga ship a vessel in a yawning existentialist void. So it is with Greek Punishment.

On its surface, Greek Punishment may seem like it’s just a pro-design statement that values coded structural constructs above all else. This may only be half the story. After processing the exterior context, the desire for logical closure points to Barr making a structural critique. Yet, since the game is without a win-state, no design-based engagement is possible; aesthetic and narrative elements are also in absentia, negating the potential for any experiential immersion at all.

The trick is knowing that the game is broken. Just as Camus postulated that Sisyphus could find happiness in accepting the absurdity of his eternal condition, so too can we realize the value of engagement in acknowledging an equally absurd scenario – a meaningless task you can play.

Steve Haske is a Portland, Oregon-based gun-for-hire journalist. You can follow him on Twitter @afraidtomerge. Visit Pippin Barr’s website to join in the fun (and futility) of his games. [Editor’s Note: Play Zorba, for the music if nothing else.]

The Audience Can Kill