This feature is a reprint from Unwinnable Monthly #156. If you like what you see, grab the magazine for less than ten dollars, or subscribe and get all future magazines for half price. 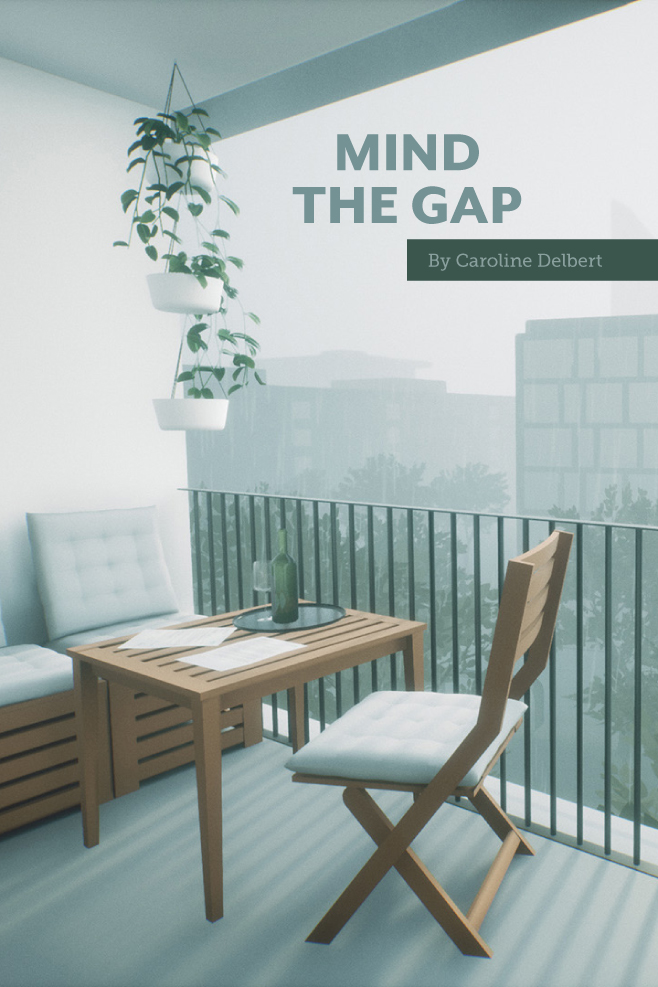 Jan Gortnar and Sara Lukanc are game developers, based in Slovenia, whose narrative exploration game The Gap is supported by an Epic MegaGrant and slated for release in 2023. In The Gap, you play as neuroscientist Joshua Hayes, who is suffering from a degenerative genetic disease that sounds like something like Huntington’s: “slowly [eating] away at one’s personality, ability and sanity.” Hayes volunteers for an experiment that might help him reclaim his life, and he spends the game trying to reconnect missing pieces of memories that are triggered by objects in his stark surroundings.

Gortnar and Lukanc started the game in 2016 while collaborating for their BA thesis in 2016. “After graduating in 2018 our journey started to have a snowball effect, slowly turning the game into a more professional venture,” Lukanc says. “Before receiving the MegaGrant we had worked on the game in our free time, which has stretched the development process into years, rather than months.”

They prepared for the grant application by completing two support programs. Receiving the grant transformed their game development process. “Getting the grant enabled us to work on the game full time for approximately six to seven months, polishing and extending it for about an hour and a half. The playtime extension from approximately 2.5 hours to 3.5 to four hours also sat well with our (future) publishers,” Lukanc says. Especially on Steam, the two-hour boundary is seen as key for many indie developers – people can return shorter games even after playing them.

To get to this point, Gortnar and Lukanc have put in a ton of work and done a great deal of self-education. “Since our primary goal for the game was to get us a BA thesis, and we had no academic background in game design (our field was visual communication design), we wanted to limit the scope of the project as much as possible, while still making it interesting enough to work on,” Lukanc says. “One evening we decided to grab a drink and talk about possible concepts when the idea of parallel realities, throughout which some sort of mystery would stretch, came along.”

They shared the work and divided tasks along the same natural lines as their interests. Lukanc enjoys writing, illustration and graphic design while Gortnar does 3D design, programming, sound design and music. Dividing the work helped them to scale together as their game concept developed. “The idea quickly grew from a small game that takes place in a single apartment throughout different parallel realities to something which takes place in multiple different environments,” Gortnar says. “We didn’t really have any idea how big of a project we were undertaking back then, but it grew organically to where it is now.” 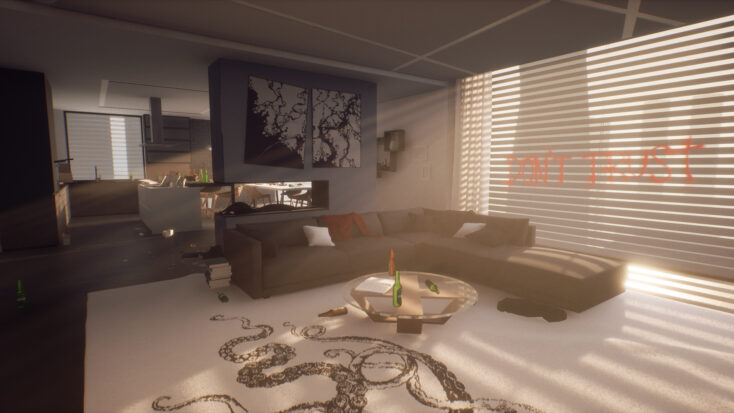 “The primary concept of the game was more of a ‘walking simulator’ without many puzzles, but we slowly realized that the game needed more interesting and diversified gameplay,” Gortnar says. “Adding puzzles was the obvious choice. Designing those puzzles has definitely been a challenge though, since we wanted for every puzzle to make sense in the game world and overall story. We hope we managed to make the puzzles satisfying and fun to solve.”

By keeping the game’s art style relatively simple, the two have controlled the graphic complexity that can add a ton of programming and modeling work to a small game. Lukanc was able to use her art background and tools like Adobe Illustrator, Adobe Photoshop and Procreate to make assets for the game. She also used “analogue techniques” to bring one character’s professional paintings and artworks to life. “This also makes the creation process more versatile and fun,” she says.

Gortnar has handled most of the environmental design using Unreal Engine, which he started to learn when they began the project. “At first, I only started to work on the environments, and after Sara and I joined forces and The Gap was born, I started to also learn the Blueprint visual language and how to actually make a game in Unreal Engine. In the years we’ve worked on The Gap, I’ve also participated in a few Epic MegaJams that helped me understand the engine further and also used Unreal for freelance work and personal projects,” he says. 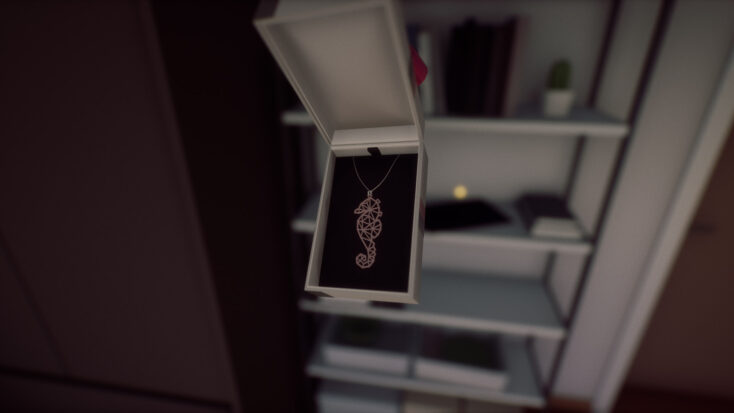 I’m a lover of spaces in games (see my column elsewhere in this issue!), and The Gap stood out to me right away. The environments are 3D, decorated with classic “memory game” adventure clues like objects, papers and phrases. But what really struck me was the light: it’s expressive and crepuscular, with rays and shadows falling into each different environment. “We based a lot of storytelling on environmental design, and the right type of light adds the essence to all our environments,” Lukanc says.

“Since the materials in the environment are mostly simple without any unnecessary details, it was important to make the lighting look as good as possible,” Gortnar says. “At first, we tried to make the game’s lighting look more stylized and ‘flat,’ only using dynamic lighting, but we quickly realized that fully baked lighting gives us a much better atmosphere and fits better with the style of our game. I spent a lot of the time tweaking each light source’s position and parameters to get the shadows and lighting just right.”

The lighting goes a long way toward warming and dynamicizing the game’s spaces, and it also heightens tension in a game where the places are the characters. “The game mainly takes place in the apartments that you’ve lived in throughout your life, which we’ve tried to make look lived in and homey,” Gortnar says. “From those apartments you can ‘visit’ your memories, which are the scenes you see on the screenshots. Each memory is a small vignette of an important event of your life, and we’ve wanted to make them diverse to help break up the exploration of the apartments.” 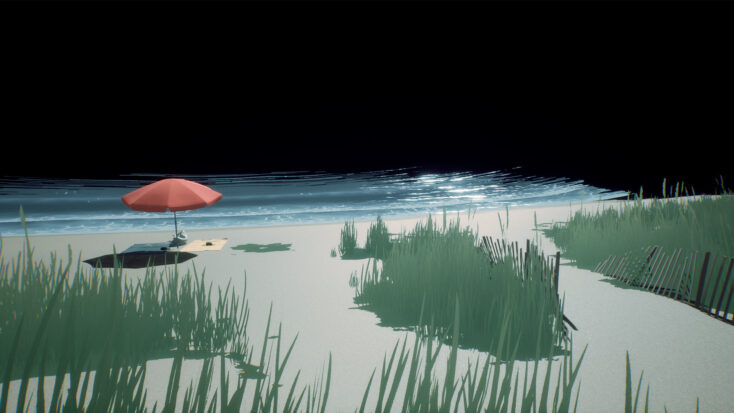 The Gap is set in 2045, far enough that the pair hopes players will go along with the narrative lift. “The main reason why the story is set further on in the future is because we wanted to make all the necessary technological advancements believable so we wouldn’t break the player’s immersion,” Lukanc says. “The story mainly deals with memory loss and its implications on our identity, relationships and day to day lives. There are some essential parts of the story dealing with nanotechnology and advanced neuroscience (which are yet to be accomplished by the real scientists), making the game hard sci-fi.

“We also don’t want to go into too many details about what these memories are, since we want the players to enjoy and be surprised by the unknown and unexpected parts of the game,” Lukanc says. “Still, we can promise you that they are as interesting and diverse as possible. Also, since we are far from being scientists ourselves, we adopted some scientific theories and hypotheses which supported our concept and story. Any scientific gaps that appeared along the way were filled with our own imagination.”

Lukanc and Gortnar began with a concept they believed was reasonable for two university undergraduates with no game development experience to take on. And it’s true that the final game sounds like it’s a substantial size that will still be manageable to players as well as the developers. But the scope has grown and complexified quite a bit, something that makes sense given the often-hidden realities of game development and even things like introducing settings that require some scientific research. 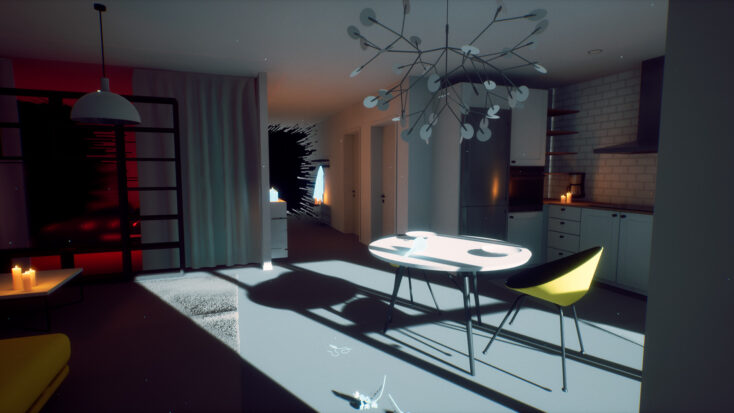 “We didn’t have any plan for this project beyond the final BA thesis back then, so we’re still really surprised on how much it actually managed to grow,” Gortnar says. “We were also surprised by how long things in game development actually take, from the development itself to the business and management side of it.”

Lukanc is frank. “If I could go back in time and be able to change anything, though, I’d try to come up with a less complicated story [and] concept for our first game, and think about long term goals for the project early on,” she says. “For an inexperienced indie developer without an academic background in game design, it can be especially hard at times to dive straight into a professional setting without much guidance. On the other hand, we can consider ourselves extremely lucky to get the MegaGrant and a publisher, which will help us get through the rest of the development and all the marketing hurdles ahead.”

It’s clear that different Epic programs and software have helped Gortnar and Lukanc feel supported as they developed their game, and that’s especially important within the small but burgeoning game development scene in their home of Slovenia. The Gap is set in a general way in North America, very different from the small Central European nation where they live.

“The game developer culture in Slovenia is still in its infancy,” Gortnar says. “There aren’t really any AAA studios here apart from mobile developers. The industry is mostly made up of smaller indie studios and individual hobbyists. Things are starting to grow, however, with more developer workshops, meetups and events happening each year.”

For more about The Gap, check out the official site or add the game to your Steam wishlist.