This feature is a reprint from Unwinnable Monthly #148. If you like what you see, grab the magazine for less than ten dollars, or subscribe and get all future magazines for half price. 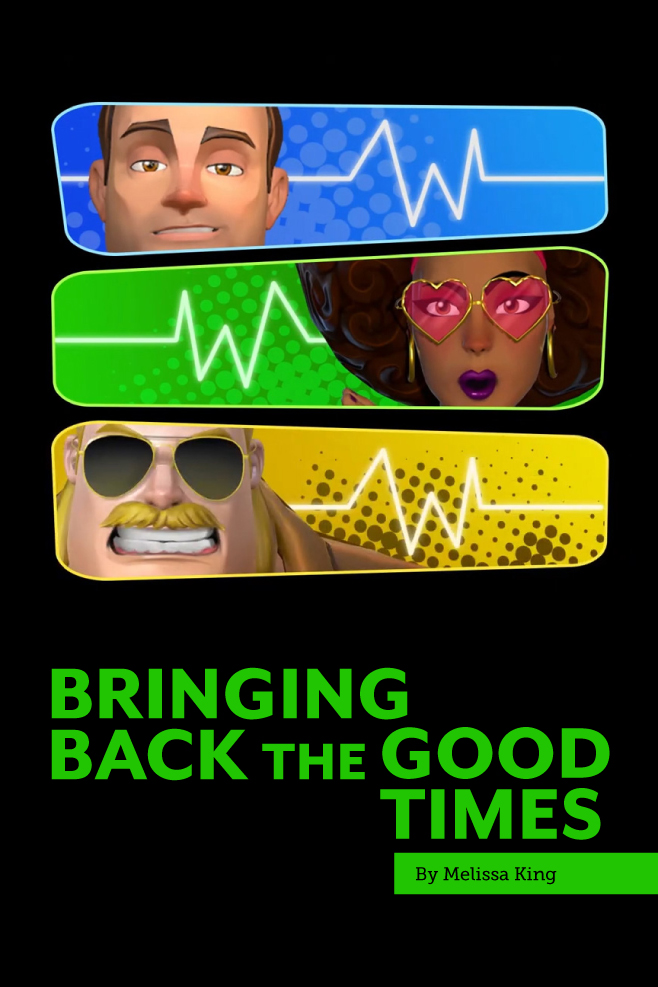 The vibrant trailer for D.A.N.G.E.R. Team shows superspies dodging, grappling and fighting to exciting music. They navigate toxic waste and red trip beams through a secret science lair. If it brings back memories of your favorite spy films from the ’60s, ’70s and ’80s, consider On3D Studios’ job done.

According to CEO Jaime Andrés Castilla Ruiz, D.A.N.G.E.R. Team’s main premise is a free-flow fighting experience in an indie game production. But, On3D wanted to bring something new to the genre, so they gave the game three playable characters capable of doing team maneuvers. They added a healthy dose of exploration mechanics providing each character with a unique skill to help the team advance.

“All these mechanics are packed in a nostalgic setting inspired by spy/action movies and series from the ‘80s,” Ruiz says. This inspiration comes from a personal place for the On3D Studios team.

Ruiz says, “In Colombia, the USA’s ‘80s arrived in the ’90s, so we all grew up watching the ‘80s shows.” They also watched movies starring James Bond (“the old ones”) and Arnold Schwarzenegger, among other iconic spy media. Quentin Tarantino’s Jackie Brown was a later work that got added to the mix. Through D.A.N.G.E.R. Team, On3D Studios wants to share the fun they had watching these shows and movies as kids.

“With that in mind, we want to deliver a fun and funny experience with a lot of slapstick humor. It’s inevitable to laugh and make jokes about those stereotypes, so that’s our take,” Ruiz says. “We expect that the players have a good time dealing with the mechanics but also laugh at the characters and remember older times when everything was simpler.” 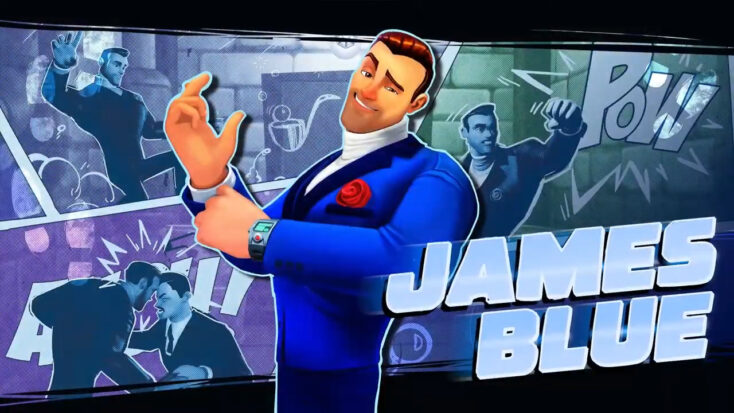 On3D channels a lot of this fond nostalgia through the three members of the titular D.A.N.G.E.R. Team, who take part in a Charlie’s Angels-esque organization.

James Blue uses his wit and tech gadgets to get the team out of any tough spot through hacking. In the trailer, you can see him sneaking through hallways filled with hazards.

Kim Brown is an “agile, prolific martial artist.” She’s great at stealth, very intelligent and skilled in various styles of martial arts. Her section of the trailer highlights her grappling hook she uses to navigate each level.

Then there’s Dutch Hopper, the strong demolitions expert. “If there is a door that doesn’t want to open, he will destroy it for you,” Ruiz says. (Shout out to Dutch’s stylish “Master Exploder” jacket.) The trailer shows him brawling with baddies and throwing crates.

Ruiz says, “These three characters have good chemistry together.” But, since D.A.N.G.E.R. Team is all about highlighting the absurdity of the spy genre, the characters also “have tension between them.” Nothing like quips between team members to lighten a game’s mood.

The trailer also temporarily shows a fourth character, a blonde man in a business suit. Ruiz did not reveal who this person was, but chances are, he’s the Charlie to the D.A.N.G.E.R. Team’s Angels. 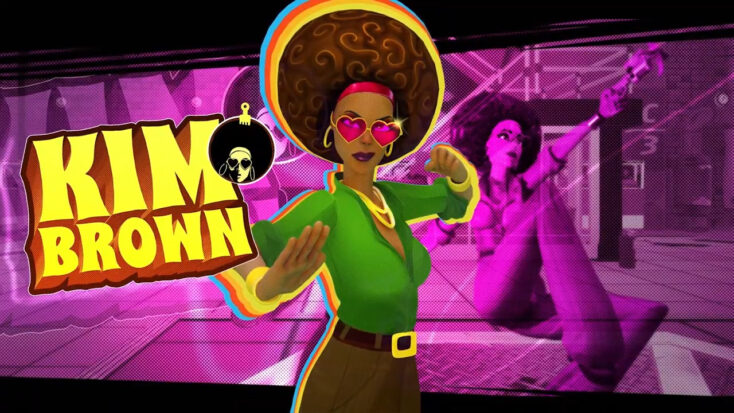 D.A.N.G.E.R. Team is the culmination of On3D Studios’ ten years in business. Ruiz, who founded the studio, started out in the animation industry, but he felt that it was too “stiff” for him. “It felt kind of limiting. That’s when I started exploring how videogames can tell stories; how they can let the player make choices and feel part of the universe. So, I decided to start the studio back in 2012 and move forward with the idea of videogames as a viable opportunity for growing up and doing cool things,” Ruiz says.

On3D Studios’ previous title, Quantum Replica, has decidedly different vibes and mechanics from D.A.N.G.E.R. Team. It offered a stealth-focused experience in a cyberpunk future. But by creating Quantum Replica, On3D Studios discovered what they wanted to make in their next game. As they developed Quantum Replica, they realized they enjoyed working on combat mechanics more than stealth and considered it much more rewarding and challenging. Plus, after designing Quantum Replica’s single-character experience, the team considered the possibilities of switching among three characters. “If you can control three characters, imagine all the combat-related possibilities,” Ruiz says. 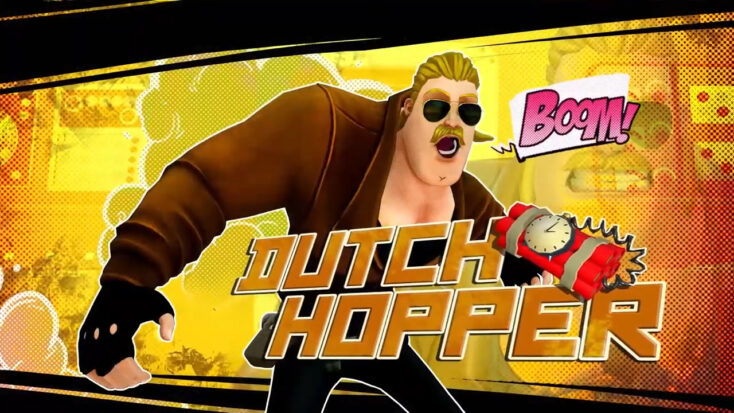 These ideas and a Colombian government incentive to boost the videogame industry led to D.A.N.G.E.R. Team’s foundation. Ruiz says, “We proposed a three-character game with some stealth elements, as well as FPS.” Once they established those mechanics, they “looked back and came up with the idea of setting the game in the ‘80s with some cool art direction and humorous elements.”

But while D.A.N.G.E.R. Team has stealth elements, it’ll have a much bigger emphasis on combat inspired by the Arkham Knight games. “We love fighting games at On3D, and Arkham Knight, as well as Shadow of Mordor, were big inspirations for us,” Ruiz says. Ruiz stresses that the combat will center on free-flow fighting elements inspired by these games.

As they design D.A.N.G.E.R. Team, On3D Studios will focus on the experiences they want players to feel. It’s the design approach that Ruiz takes with every game. “I’m always focused on how to reproduce that feeling we have in our heads,” Ruiz says. “It requires a lot of effort to achieve that, and every day I’m most convinced that it is only possible by working alongside dedicated and very talented people in their respective fields.”

Epic Games’ MegaGrant program has helped On3D and Ruiz give these skilled folks the resources to get their work out there. “The Epic MegaGrant helped us in putting us in the eye of publishers and investors, mainly. The most difficult part of game dev – for us at least – has always been trying to reach out to partners to take on our projects with us, and being one of the recipients of the MegaGrant really helps us with this.” Ruiz says.

D.A.N.G.E.R. Team is still in production, but you can keep tabs on its development by visiting On3D Studios’ website or following them on Twitter or Facebook.

Hell is Other Shooters