My time in high school was not spent overachieving. The school day was for school assignments, and I put in the effort at that time, but even back then I appreciated a strict work/life balance. So many long drives to take, conversations about ska and grunge, heated arguments about which moves were and were not cheap in Street Fighter II’s multiple variations.

But a few friends seemed to be having a swell time doing Drama, and what’s better than a swell time with friends? It didn’t hurt that the Drama instructor also taught creative writing once in a while, the class I felt most immediately drawn to. So, she side-loaded me into a Spring Renaissance fair where I half-assed my lines as the eponymous Scottish king in merely the first scene and dropped a twenty megaton stinker, but for some reason still had so much fun that I was hooked. We built sets, got silly, cracked some tough nuts and tricky standards, took home some awards and spent a lot of long nights as a group collaborating on it all.

On stage and behind the curtain, a production floats entirely on the strength and energy of every participant. Everyone plays a role that allows the others to shine even brighter to the tick of a watch until the bow at the end and a celebratory slice of pie at one of the three diners in town where we could applaud the highlights and giggle about what we got away with.

This same opportunity to slide into a role and perform as part of a larger purpose is a powerful element of what makes co-op shooters so satisfying. Sure, it’s possible to barrel through Left 4 Dead solo if you just lower your head and grind it down, but it’s a much more fulfilling experience to shout out the scene together. The Anacrusis, an Early Access game sticking close to the co-op formula, draws heavily from its forebears but has locked the script into a singular retro-aesthetic. Unfortunately, while the dressing is superb, the sets themselves as well as the plot structure so far are still slippery with ink. 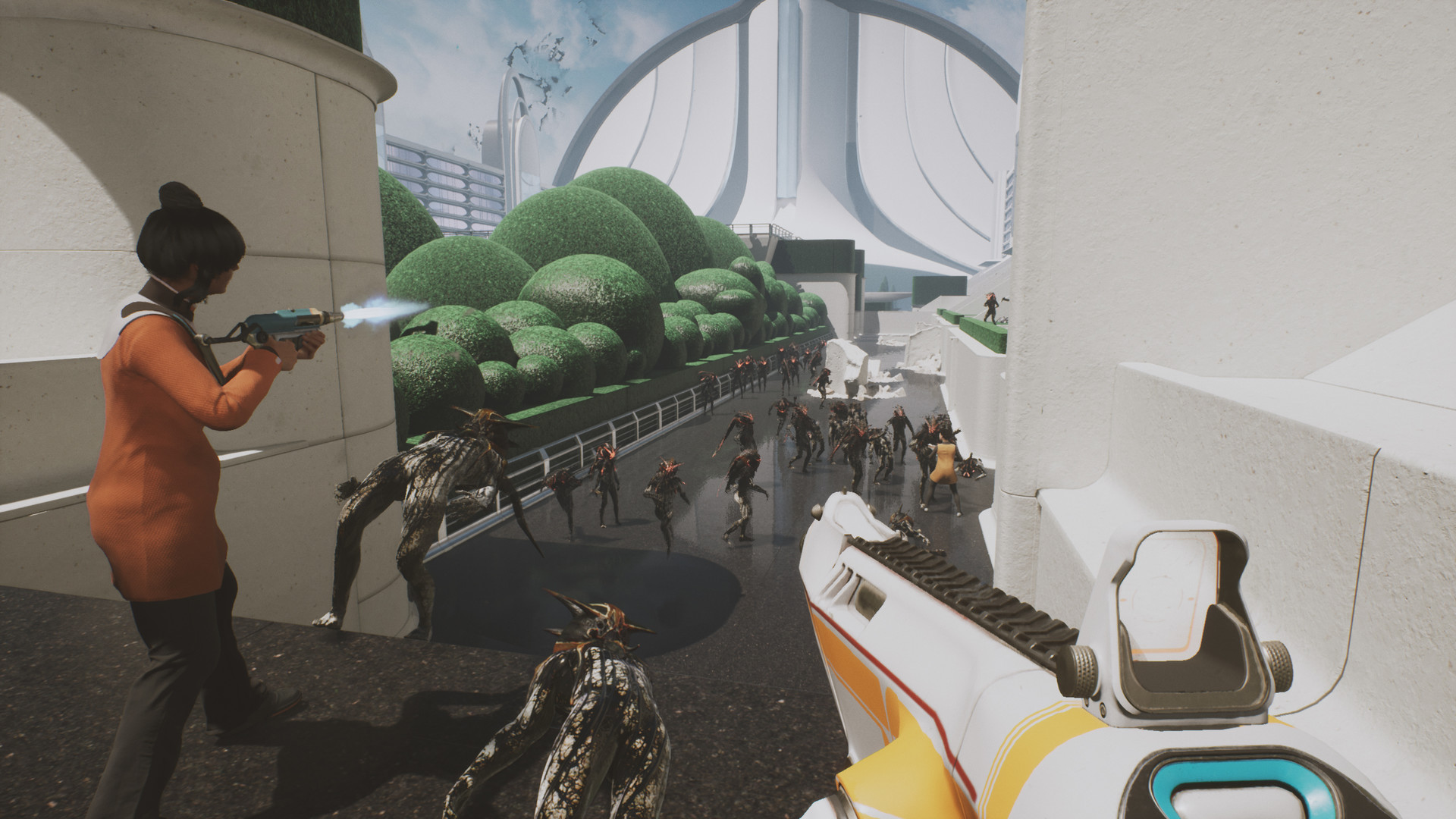 The vibe here is Star Trek lined with Austin Powers – polymer one-piece uniforms meets chalk-candy make-up and analog design. As I explored, I half expected Crow and Tom Servo to chime in, but it’s usually just some cardboard banter and almost helpful diegetic assistance. You play in a squad of four knock-off Space Navy volunteers caught in a parasitic invasion of your station. The team makes their way by blasting through rubberized aliens that pop out of doorways like infected cast members of Laugh-In, firing weapons that feel like toys while accomplishing the goal of pushing a button and running to an elevator time and again. The Anacrusis is really soaked in its particular trappings and for the most part wears them well, but does not bear some slight thread-pulling as of yet.

I enjoy how the game leans hard towards camp, but it’s not quite realized in the actual gameplay. The grenades get close as they provide the most variety outside of our typical FPS archetypes, with some that slow down time and others that yank aliens in odd directions, though they’re still in an uncanny phase of execution. These weapons can (and may still) be so much wilder, even if it was a more general riff on phasers instead of Nerf. The enemies are mindless, challenging mostly as a mob with some specialized monstrosities that swing big or wrap you up in a webby goo that requires a friend to crack out of, or one that wanders around like an errant sunbeam piercing retinas left and right. This enemy in particular seems to irk a lot of players, though I admire the audacity of it to some degree. But the swing is a little off, it’s deployed too often and mostly within an already disorienting morass that becomes nearly impossible to wiggle out of.

The Anacrusis still feels like a tech rehearsal ironing out a number of conflicting desires and goals, which is perfectly fair for a game at this stage of development. There’s something here, the potential to twist itself into a truly bizarre collaborative acid trip by leaning into the hamminess that they’ve already employed so effectively. This is a game that I can see myself getting deeply giddy with alongside some of my most cherished and deranged collaborators, a contender for cultish adoration.

But the feeling of my very first performance remains, a slip of confidence and a loss of line and direction, potentially leaving this title as mere fodder for MST3K and the like to riff over with the boldness that the creators couldn’t quite grasp. I hope that is not the case, and that I will be proven wrong, at which point I will boldy stand, salute and applaud.

Kings of the Cable: The British Chess Association Festival of 1872
Previous Post

What to Do for Dinner