My wife finishes Red Dead Redemption 2 and immediately starts another save. She is better prepared now, to say the least – though she can’t use the Dead Eye ability so soon against those desperate, cruel wolves that slice John Marston’s face and give the player chase. And later she finds that she cannot collect this stunning, spot-gloss onyx beauty of a horse, because she has not unlocked stables. Though she is an immediate and uncompromising hunting menace for the game of this condensed Southwestern United States, she’s quickly reminded of how Red Dead Redemption 2, like most open-world games, is not a buffet but a meal of many courses, each slicing away a little more denial from the last, to keep the saliva flowing.

Partly this is the nature of linear time. We must follow Arthur and John’s stories as they unfold, we must have a reason to explore this meticulously crafted expanse. The game doles out our sweet denial, an endless spring to hunt and roam and kill O’Driscolls, slivered experiences that are not fully peeled until much later on. But moving forward demands that we suffer the slow-motion car crash of our gang heading straight into the cinderblock myth of the West.

Even on a second play through, the temptations are too sweet. And perhaps there’s some solace in complete knowledge of these characters and their fates. That’s the blessing and curse of fully submitting oneself to spoilers – no longer beholden to the cheap thrill of an unwinding plot, we can luxuriate in the details, with which Red Dead Redemption 2 is consistently bursting. As we mosey, we again meet the source of Arthur’s tuberculosis, we avoid him until we are too bored or want a specific skill or horse fence or whatever and play the quests as necessary to unlock those doors. Thus, we are afforded a tiny rebellion and a glimpse of agency, though it is false – the seasons will never turn, though we can take the time to ride and visit the expression of most of them. Our Arthur avoids his hacking destiny, but he is not truly living in the meantime.

There are little stories built in throughout. The West of Red Dead Redemption 2 is stuffed, every trail ready to surprise us with a carriage, a stickup, a damsel in distress, where we can play villain or good boy at our leisure. This, along with greeting thousands of strangers and patting those horses virtually non-stop if you play as my wife played, can help swing your little hat to the left or right. Doing so is the difference between cranky Arthur or penitent Arthur, a grave that is visited by those who’ve received your kindness, or one simply left to erode. But Arthur dies, as is scripted. The player can only nudge him along the path, maybe help him sway to one side or the other, and no matter what you will find a fishing rod and collect guns and mow down legions of men. 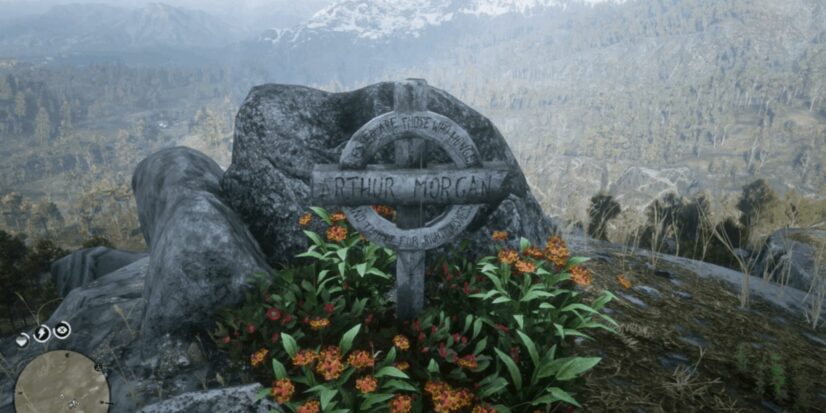 As such, the player is denied a place in this game, as in every game. Their actions are inconsequential. Red Dead Redemption 2 is not somewhere to live, or write your own tale between these characters, outside of journaling those small, surprising moments of play. We admire the vistas as we are meant to and there is no shame in this, but it’s not a world in which our existence leaves a mark, or our name rings out. We are denied this, and perhaps it’s for the best, as it seems to be a miserable slog of cheap death, scarce kindness, intergenerational trauma.

But still, my wife loads up that new game. We boo and hiss as Micah parts the curtains of snow, line up some shots on the gang that transforms Mrs. Adler’s life. We do our best to keep Arthur stocked up on good boy points, though it’s hard, because we must kill our first horse to save the magnificent second one that we caught too soon. We find our little ways to struggle against this denial.

The Power of Print