Raw horror ain’t my jam. I prefer to watch spooky stuff thoroughly spoiled and vetted by those I trust. This way I can appreciate the tension and overall cinematic craft without getting completely lost in an amplification of my own neuroses. But while I’m not disposed to seek it out, when the genre hits it hits hard, leading me to those who think more deeply on the form such as Kier-La Janisse’s House of Psychotic Women, a singular book of memoir and criticism that explores how horror can be a way of processing trauma, or podcasts like Live at the Death Factory, where the takes are nuclear and the insight is forged from folded steel. Thus am I allowed to skirt the fringes of horror without giving my sleeping brain dark inspiration.

That said, I’m feeling a shift in this once rock-solid personal foundation, thanks to Tuesday Knight Games’ Mothership. Maybe you’re aware of this tabletop roleplaying game system, as it’s been floating around in zine form for some time and warped past $1 million in its recent Kickstarter for the more fully realized first edition. Mothership might have once been described as an indie Alien TTRPG before the otherwise excellent official one dropped, and it’s fair to say that the two hem fairly close to each other, given their shared goals of tension, fear, space teamsters, stress, panic and wild xenobiology. But beyond their shared influences, the Alien RPG aims to provide a more outlined, cinematic experience closely aligned with its source material, Mothership (like many other indie RPGs) has inspired third-party creators across the globe to crack the wormhole wide open.

In the past couple of years alone, dozens of official and unofficial pamphlets and zines have hit the conventions and the online popups to embrace and enhance the percentile-based frames that Mothership provides. Even Ashley Johnson, the voice of Ellie from The Last of Us and contributor to the wildly popular Critical Role stable, ran a one-shot on the bones of Mothership. There’s terror on asteroid mines, picket line murder mysteries, space station merc shenanigans, necro-dimensional zombies and so much more in a flurry of color and bold design. 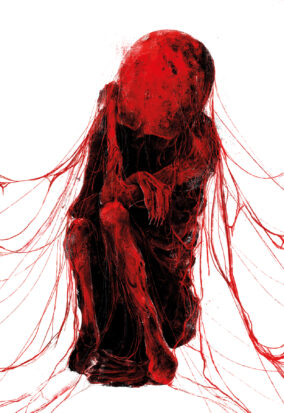 But all of that is just reading the outline of a tale if the system can’t inspire cold sweat and tantalizing terror at the table. As I found myself collecting more and more of these zines, it felt like the time to step beyond my horror hesitancy to see if Mothership lived up to its reputation of delightful dread. In doing so, I’ve found that running a game steeped in terror suits my predilection towards spoilers in a mighty fine way. As the Warden (Mothership’s term for the Game Master, pulling the strings and directing the narrative), I am taking control of the fear. This is a tricky dance, because as I am not interested in a fully nihilistic experience completely devoid of hope, I presume my players aren’t either. But this isn’t a stroll down candy corn avenue, as I wind their characters towards meaningful decision making and the terrible consequences of their hubris.

I warned my crew with a popular maxim for Mothership: if you’re rolling the dice, it’s probably too late. Of course, rolling dice is fun, but most skills in this game give the players lower odds than a coin flip. Yet a bad roll isn’t instant failure, rather, I play it as success with a steep cost – attracting unwanted attention, breaking a tool, only finding access to part of a system before getting locked out, etc. All of this increases in-game Stress, a minor annoyance at first, but the more you collect the higher chance of a heart attack and character death later. Defying these odds wouldn’t feel so grand otherwise.

Failure allows for serendipitously unscripted moments, like a teamster botching a grenade toss and developing a phobia for them and the random nightmare table serving an impeccable expression of this fear later on. And while sometimes these thorny situations can cause analysis paralysis in a squad, nothing helps nudge things along better than some atmosphere music and a few timers reminding you to put the squeeze on them. For every bad call, unlucky roll, dead character, the triumphs taste much more sweet. Thus horror, and Mothership, allow us to play through terrifying and bleak scenarios, and occasionally, the bliss of a close escape, or valiant last stand.