For centuries, Chess has simmered as the sport of choice for men with titles and soft hands. Ensconced in their mewling societies and clubs, trading barbs and opening gambits, these players initially set the tones and patterns of the game which steadfastly spread as a delightful method of amusement across the globe. But in the last few decades those who carry a more robust spirit of workmanship and dedication to craft have adopted the obsession, and it is since this point in time that Chess has truly blossomed as an exercise in refinement, reason and rationality.

As the lower and middle classes have expanded and more of this world’s citizens find themselves with the grace of literacy and leisure time, common folk have sought out ways to stretch their aching minds. We humans are naturally curious and drawn towards tasks that challenge and stretch our mental fortitudes. Consider this alongside the spontaneous desire for competition carried through our various humors and chakras and you’ll find a populace desperate to answer the call to the cerebral hunt.

With more players gaining proficiency with pawns and rooks and bishops by the day, a hunger has emerged – the people cry out for more games, more analysis and more rivalry! And as such it is our immense pleasure here in Unwinnable’s inaugural pages to offer such delights. You’ve poured over the lists of defenses and openings in less auspicious rags, mentally piecing together some of the most thrilling matches of our age. But only since the establishment of telegraph cables spanning our great continent as well as those resting under the ocean to carry syllables to England and beyond has Chess flourished as the respite of serious thinkers and sensible practitioners.

Perhaps you followed the Liverpool-Dublin match of 1861, or even found yourself involved in the International Chess Congress of 1869 (nice) at Baden, where warriors across Europe gathered through the elegance of electricity to exchange moves. Chess by wire has taken time to find its footing among the masses but this year all constraints have been entirely unraveled. Blackburne himself will be simultaneously playing ten blind matches, and if that wasn’t enough to display his obvious prowess, he will also be competing in five telegraph matches at the same time! 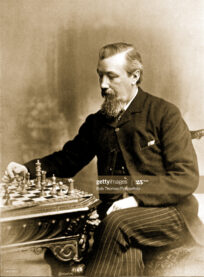 Sure, anyone could lose fifteen matches in a single moment, but that’s not what any self-respecting moustache waxer expects from Blackburne. He has earned his nickname “The Black Death” with a dramatic style of play that sets the letter page of nearly every local paper ablaze with inflammatory limericks of praise and damnation. His tactics are not all powdery flash however, and though he is still early in his career he has earned the talk of sponsorship that floods the alleyways, including his own personal brand of Chessing Chairs for ease of comfort and adequate lumbar support while defending one’s king with but a handful of pawns remaining. This absolute titan of the grid cannot be contained by a single club, though many have tried. Blackburne’s nimbleness of joint and thought demands free expression, and by the gift of telegraphy we are here to luxuriate in the spoils of his grandeur. Please look forward to rundowns of recent developments as well as lists of movements in these very pages, even if it takes us to the twentieth century!

And yet at the same time, let’s not deposit all our eggs at the feet of a single bard of the board. Blackburne dominates Europe, but Australia is not refuge of slouches, with clubs taking up residence across their tempestuous lands. Australians have taken to commandeering their telegraph offices on holidays (an easier feat, by far, due to the lower volume of business by cable) to sharpen their skills from coast-to-coast, whether it’s a time-tested Sicilian defense by the first strike of one of these newfangled mechanical stop-clocks or a brazen Ruy Lopez play meant to invoke the terror of the Spanish Inquisition once again!

This is all to say that now, more than ever, the savory science of Chess is an etude of endless spiritual fulfillment fit for the most fervent adherents and evangelists of the lifestyle. Whether it’s through a tense and chin-polishing match with an old chum, a friendly putter around the park with an entire nickel wagered or following the hotly compressed back and forth in the columns of your local bird cage liner, it’s clear that Chess built a foundation of sportsmanship and intense fan participation that could last for generations, or even millennia past our sun’s final setting.

As the sun crests, Leviathan Olbeck works at his family’s haberdashery. But come the resplendent stars he’s out on these cobblestone streets, scouring parlors near and far for verse stoked in spitfire and the most meticulous variants of trick-taking and tile deployment. His latest pamphlets can be purchased from the least discerning newsstands and tow-headed criers.

Almost Ready to Face the Present

As the Sea-Gull Flies