Two years ago this very month, I kicked off the inaugural installment of this here column with a game that is near and dear to my heart – the Universal monster mash Horrified. A couple of months ago, Horrified did what all good monster movies do: it spawned a sequel.

Horrified: American Monsters moves the action from a generic European hamlet to an equally generic American resort town, and bumps the era from the turn of the century to probably around the 1950s. As a monster movie nerd, there’s a part of me that wishes they had gone with monsters from the drive-in era of American monster movies – big bugs, blobs, invaders from outer space, creatures with atom brains, that kind of thing. But without a shared franchise like the Universal pics of the ‘30s and ‘40s to call home, cryptids make a lot of sense as the eponymous American Monsters. And cryptids are very hot right now, which will probably help the game make dollars, too.

Of course, I like cryptids – they’re monsters, after all – but I don’t have quite the same affinity for them as I do for their brethren from Universal Studios. So I may not have ever even picked up this new version of Horrified had the previous one not wowed me so much. The good news is, most of the winning formula that made its predecessor tick is reproduced nicely here.

As before, the game looks great. There’s nice art on both the front and back of the game board, it’s easy to tell where you can move on the board without the areas being arbitrarily cordoned off with non-diegetic lines or squares. The art is appealing and clear, and the miniatures of the new monsters are, if anything, better looking than their Universal counterparts.

Just as the original Horrified captured the feel of those Universal movies in a wide array of clever ways, both subtle and otherwise, American Monsters nails the tone of a ‘50s drive-in creature feature without ever feeling like too much of a pastiche, or abandoning its cryptid focus. It also does what the previous game did as far as casually introducing greater diversity into the mix without drawing undue attention to its accomplishments, which would make them feel like little more than grandstanding. 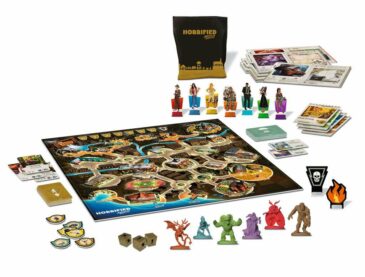 Yet… I can’t quite bring myself to recommend it as full-throatedly as I did its predecessor. Maybe it’s because some of the newness has simply worn off, or because I don’t care for cryptids quite as much as the gothic monsters of yore, but I don’t actually think it’s either of those things. Rather, the games we played of American Monsters simply unfolded too easily when compared with their OG counterparts.

Now, there are a number of possible explanations for this, and nothing I have found online suggests that the game is actually any easier than the original. Indeed, I’ve seen several people saying that it’s harder. It’s possible that we simply got very lucky, or that we were misinterpreting some vital rule, though this latter is less likely, given that we played against four different monsters, each one of which drastically changes the way the game is won

And fortunately, the game offers a built-in way to scale difficulty. As you might expect from the title of this column, we only played American Monsters, like, twice at the time of this writing, each time with only two players going up against only two monsters. The game allows for a sliding scale of difficulty, with different monsters not only being more complex than others, but also allowing you to confront up to four monsters at a time.

These can help to ameliorate any issues of challenge in the game and, again, it’s entirely possible, with a sample size of only a couple of sessions, that we just got very lucky or screwed something up in a way that proved beneficial to us. But this small quibble is also representative of my only other point of hesitation about this (largely delightful) game: While many aspects of it look great, often even better than its predecessor, it somehow doesn’t feel quite as put together as the original, as though it was somewhat rushed out the door.

It’s hard to pin this to any specific thing without feeling like I’m picking nits. There are, for example, a couple of typos in which the sheriff’s station is referred to as the “police station” instead, and the instructions for defeating the monsters could occasionally be clearer. These are all minor complaints, though, and none of them do much to hamper the actual playing of the game, making it difficult to lay a conviction of “unfinished” at its feet, especially when so much of it looks and feels so good.

Mealy-mouthed as all this may be, it’s fundamentally another hearty recommendation for Horrified: American Monsters – just not one that’s quite as unqualified as my endorsement of the original. Both games are fun and relatively inexpensive, and both offer unique playing experiences as the different monsters change the play style of the game considerably. And while neither may be perfect, fun, cooperative games about monsters are always a welcome addition to my world.