Back when I first picked up Horrified – a game after my own heart if ever there was one – someone on Facebook said that it was a lot like Pandemic, which, unfortunately, meant nothing to me. This was before we were all locked down because of a real pandemic, which finally provided the impetus for me to give Horrified a try.

Backing up a step, though; regular readers can probably guess why Horrified is so calculated to appeal to me, but for those who don’t know, I love few things more than I love vintage monster movies. Hammer’s gothic chillers of the ‘50s and ‘60s; the long, dark shadows of German expressionism; the surprisingly subtle films of Val Lewton; even the occasional big bug flick from the ‘50s – and, of course, Universal’s classic monster movies from the ‘30s and ‘40s.

The first step of what makes Horrified so delightful is how lovingly it recreates those Universal movies. When you open the box, the very first thing you see are words paraphrased from the introduction of James Whale’s original 1931 version of Frankenstein.

From there to the mechanics of how each of the monsters are defeated, the names and geographic disposition of the assorted villagers that you have to save and even the simple item tiles that you collect to complete your mission and win the game – everything about Horrified echoes the Universal films in ways that will make fans of the original monster franchises grin. 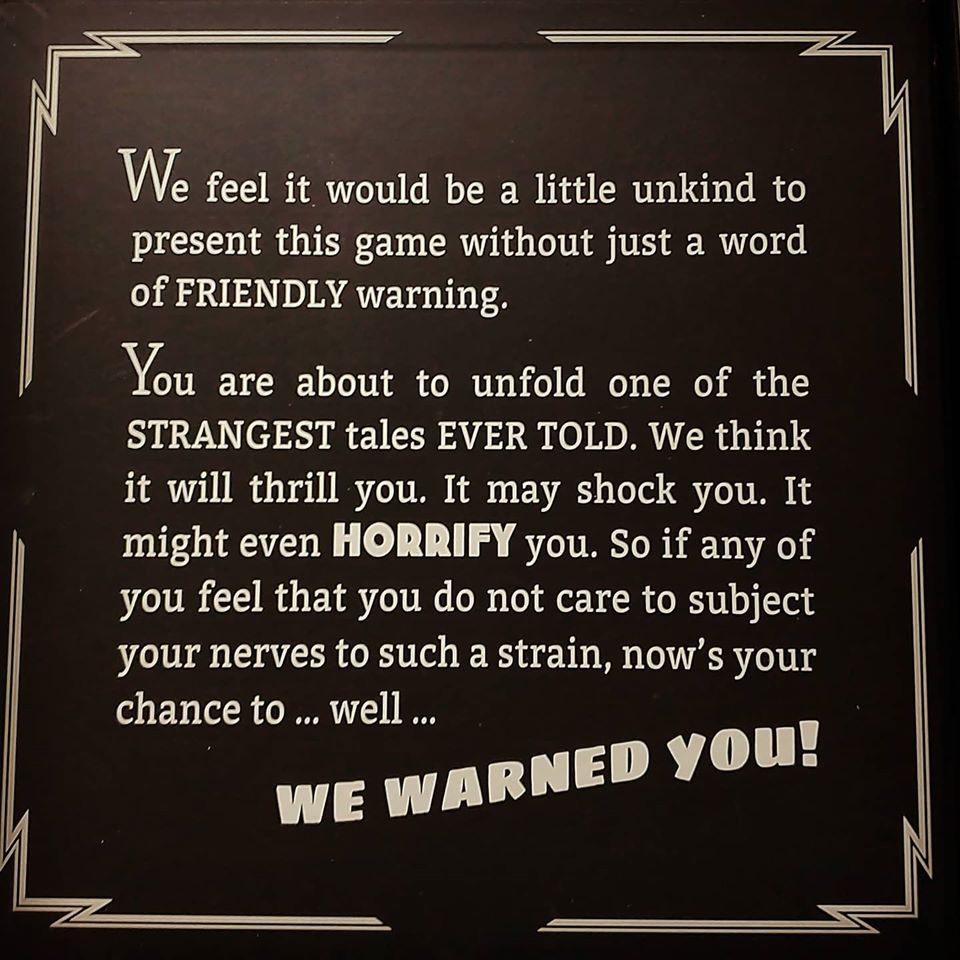 Fidelity to the source material will only take you so far, however. Plenty of games manage to be the faithful to the idea or aesthetic of whatever they were trying to adapt to the tabletop – littering themselves with Easter eggs and the like – only to still turn out virtually unplayable products of interest only to the utterly devoted.

Fortunately, Horrified is also a gorgeous game that is quick, easy, and a blast to play. I say easy to mean “simple to play” rather than necessarily “easy to win.” When I told that person on Facebook that I wasn’t familiar with Pandemic, they informed me that it meant the game would be fun, but that I would lose a lot.

While the “lose a lot” part of that hasn’t been borne out in my experiments with Horrified in isolation just yet, I can see how the game would become challenging indeed as you scale up. Most of our experiments have been with just a couple of monsters (as the game recommends) as we learn the ropes and try each new monster out for the first time.

One of the joys of Horrified is that each new monster creates a new playing experience. Each monster has a unique way to defeat it – curing lycanthropy, teaching Frankenstein’s creature and the bride what it means to be human – and a unique path to get to that point. This also leaves room for potential expansions, and I can see that people online have already created a variety of homebrew variations for classic monsters like the Phantom of the Opera or the Fly.

The monsters themselves are represented by colorful plastic minis, while the protagonists and villagers are durable and attractively-illustrated cardboard standees. One of the many tiny joys of Horrified is how casually diverse its cast is, handily solving – without making a big fuss about it – one of the problems with these otherwise delightful old films.

The game board of Horrified is one of its most obviously admirable features. Striking, immediately recognizable with its evocative illustration of a hamlet at night, the lighted streets not only stand brilliantly out from the rest of the illustrations, they make it incredibly easy to play the game, without any of the confusion that often follows from games that are this high-concept. 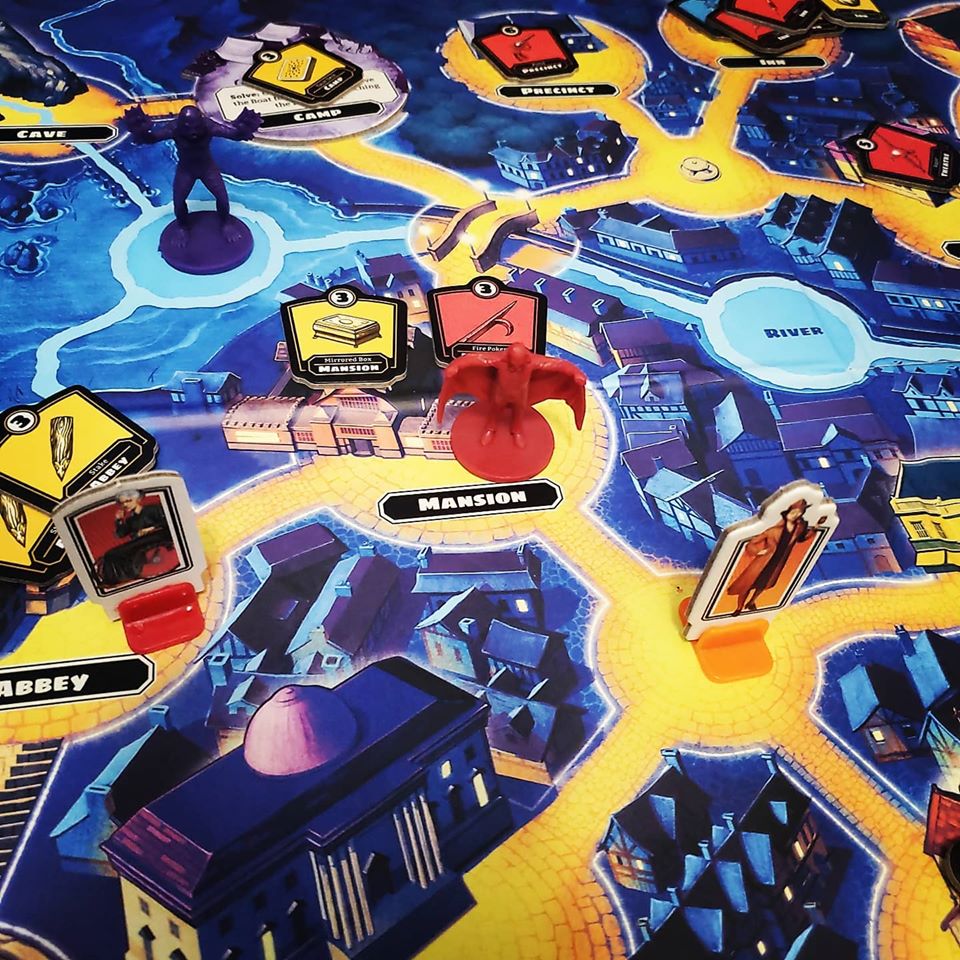 And, ultimately, that’s the best part of Horrified – it is perhaps more well-designed than almost any other board game I have ever played. Everything works smoothly, even when you switch the monsters out. All of the heroes work well, and complement one another nicely (more on that in a minute), and the rules are versatile and straightforward.

The place where the design of Horrified stood out most to me, though, is not even in the gameplay at all – it’s in the box. From the way that introduction from Frankenstein greets you each time you open it, to the fact that all of the pieces fit neatly and easily once they’re unpacked, without any need for third-party dividers or clever methodologies of repacking, everything about playing Horrified feels smooth and well thought out – from storage right on down.

When I started this column, the idea was to write about the games I bought and was excited about but, let’s be honest, never really got to play more than a couple of times. One of the things that typically keeps me from playing these games more often is that it’s usually just Grace and I in the house and so many games cannot be played with only two players. (Or, if they can be, they’re just not as much fun that way.)

That goes double during the pandemic, when everyone is essentially self-quarantined. Luckily, I can attest that Horrified is an essentially perfect game to play during lockdown. It plays beautifully with only two players (the only way I’ve played it so far, in fact) and can ostensibly even be played with only one (something I haven’t yet tried).

What’s more, its cooperative elements truly are cooperative – not only are you all working toward the same goal, but, as I mentioned, the various heroes work together in ways that make teamwork a virtual necessity. Relying on each other and working together, while also trying to keep people off the streets so that monsters can’t get them: it’s what this pandemic is all about!

Games, Horror, I Played It Like Twice..., Movies, Review

Shadows on the Cave Wall: Finding Clues in Scooby-Doo: Betrayal at Mystery Mansion

Evil Genius is a Rotting Colossus