Not to say I always count on being the victor, but there’s something fascinating about a board game where the repeated outcome is failure. In the same way that I don’t like to leave puzzles unsolved, getting defeated multiple times by the hands of a calculating player can provide incentive to persist and out-thinking your competitor. But when failure transpires due to game elements rather than a cunning player, there’s a certain level of defiance that emerges.

Triggering such reflections are Forbidden Desert and Deep Sea Adventure, both co-operative board games I experienced for the first time last year. The thing is, they’re not designed to be heavy affairs. Yet what elements they do have can be punishing if not managed strategically.

Forbidden Desert has you searching for parts to a getaway vessel while an active storm threatens your survival. There are three ways to lose: one player runs out of water, the storm reaches an unsafe peak or you use all available sand tokens. And lose, you will. 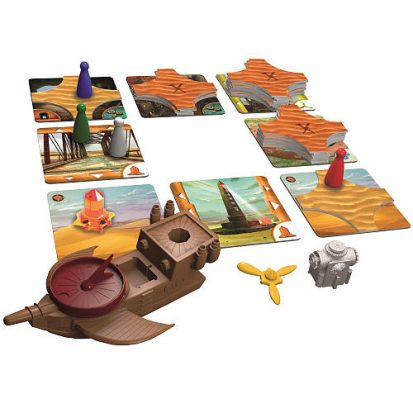 I’m on my third play of the game, and my team lost every time. Losing once was a given, for lack of comfortable familiarity with the rules. So right away, we played a second time with a clearer concept of the strategies we’d need to employ to effectively manage our coverage of the desert (such as not crowding in one area, lest the other half of the board becomes beyond our reach due to unmanaged sand levels). While we pulled off some moves that I dare say were quite clever, we still came up short and lost because of one player’s dehydration. My third session was the closest I’ve been to winning, with three out of four ship parts collected. But we lost then for running out of sand tokens (of all things!), an unexpected result we neglected to work against.

Instead of feeling stifled by the surprising challenge, I’m eager to play again and learn from mistakes made with previous teams. The same is true with Deep Sea Adventure, which, while operating under a co-operative system, has a more competitive slant. In it, players must retrieve treasures from under the ocean while managing a shared air supply, ensuring they make it back to the submarine before air runs out. The game is driven by a push-your-luck element, where there are greater rewards for venturing further down the path, but they are accompanied with greater risk that you’ll drown before you can claim your reward. Greedy attempts to carry multiple treasures back to the submarine will put everyone at risk, causing rapid lose of air supply and greatly reduced personal movement. 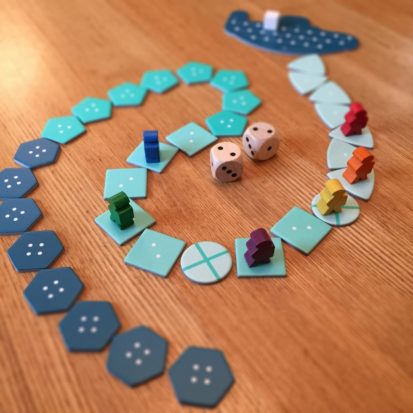 Multiple strategies emerge when playing a full-size game, where players can hop over others to reach the bottom faster, and thus treasures situated there are more tempting — especially on successive rounds, where treasures unsuccessfully claimed in the previous round are sent to the bottom in stacks. The game is a three-round affair, and my first session ended with not a single person making it back to the submarine on any rounds. I regularly overshot my chances, heading further down than everyone else, not taking into account that another player preferred to acquire multiple of the smaller treasures before turning back. Neither of our strategies worked in our favor, as we ended up drowning just the same.

Brutal as they are, both games excite me for many reasons. I have yet to achieve a winning strategy, which is both infuriating and engaging. The dynamics change depending on the group you play with (in Forbidden Desert‘s case, game elements like the storm change too, depending on player count). And there’s an understated intensity that becomes palpable once the facade of simplicity concedes to ominous peril.

To be sure, I have more losses in store for me (glub, glub, glub). But with defeat as an expectation, victory — when it comes — will be satisfying indeed.