Children are wonderful. Small and easy to trick, they also excel at some of the more tedious chores of daily living, like husking corn, gathering wood, winding bobbins and serving as early warning monitors for oxygen deprivation in the mines when you’ve lost the company canary. As the old saying goes at the conglomerate funding this periodical, the Unwinnable Steel & Mining Trust, “It ain’t quitting time until the last kid goes dizzy!”

Now, everyone knows that a good child is a docile child. But kids these days have been spoiled by the massive amounts of media available to them. Good luck getting them to read a book, though. Books are lousy! will, no doubt, be the reply. Today kids demand magazines filled with ignoble photographs and comical books that suggest it is humorous for a child to sneak out of work twenty minutes early at the end of a ten-hour shift at the copper smelting plant. So much for an honest day’s work!

Fear not, gentle reader. Your intrepid scribe has perused and partaken in all manner of games to provide some ideas for keeping your brood occupied during their few hours of free time in a respectable manner. Before we get into suggestions, though, here are a few good rules of thumb for keeping your children sufficiently subdued. 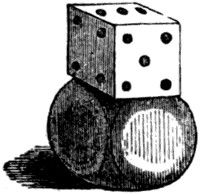 First, forbid any game using dice. No matter what silly lark your children claim to be playing, know this: all dice lead to craps! This will inevitably devolve into a compulsion to gamble, and you’ll soon find yourself having raised a degenerate. Or worse, a scallywag!

Second, tucker your children out – a tired child is rarely rambunctious! – by forcing them to engage in a sporting activity. Baseball is a superb option as a single game occupies a whole neighborhood of children from dawn to dusk. Track and field is another possibility, providing a wide variety of events to get the humors sloshing about. However, I do not recommend allowing kids to engage in boxing matches. Sadly, formal fisticuffs haven’t been the same since the Marquess of Queensbury Rules invaded our shores. Didn’t my grandfather’s grandfather win a revolution to put an end to such tyranny?!?

Third, make sure your child eats at least one healthful meal a day. Many acts of poor behavior by children can be attributed to a lack of proper nourishment. The American Medical Association recently announced it is vitally important to give your child at least five helpings of rhubarb each week. Perhaps more important is knowing what food children should avoid. Leave the potatoes to the Irish. That papist tuber will give your child a belly full of starch and a head full of mischief!

Without further ado, on to the amusements!

Hoop & stick is still number one in the hearts of children. You can’t take two steps outside your door without dodging shoeless urchins running alongside their hoops, sticks in hand. Well, this year promises to be one worth writing an epic poem about. Not since the erection of the Crystal Palace for the world’s fair in 1853 has there been such excitement in the merry-making industry. Everyone is anticipating the next hoop & stick innovation to spring forth from the mind of inventor extraordinaire Harold J. Bartleby. Not satisfied with perfecting the aluminium hoop, Mr. Bartleby has his sights set on crafting the ultimate trundling stick. Reports out of his hometown of Cincinnati suggest he has been experimenting with handles made of lead. Is there nothing lead cannot improve? Let’s just hope Mr. Bartleby’s new invention, whatever it may be, meets a better end than the Crystal Palace, which, like most buildings, was eventually consumed in a devastating fire.

Move aside, whirligigs, for stereoscopic viewers are rising in popularity. Kids love peering into those lenses to see three dimensional drawings of hilarious tableaus. Last year’s top selling stereoscopic image scenarios, according to J.R. Plennyworth, proprietor and publisher of The Stereoscopic Image Gazette, were: (5) mouse scaring police officer; (4) horse wearing farmer’s clothes kissing farmer’s wife; (3) mother chasing naughty child with stick; (2) goat eating vagabond’s bindle; and (1) preacher beating naughty child with stick. What does 1872 have in store for the stereoscopic enthusiasts out there? We shall keep ourselves abreast of all developments and report back! 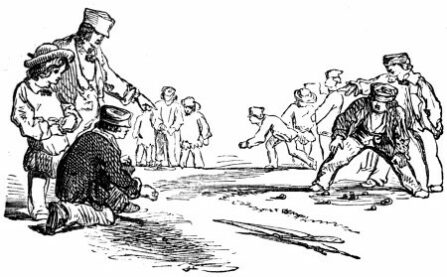 Marbles are the subject of nefarious rumors blowing in from across the Atlantic. The word on the boulevard is that the Prussians are working on a project that will take the marbling world by storm. I have it on good authority it involves a machine that will produce marbles made of glass! It sounds preposterous, but my mother always said, “Never doubt a determined German!” She also said never turn your back to an Australian, but that is neither here nor there.

Finally, there is a new game that is currently confined to those small gaming clubs of ill repute that are famous for introducing devil-may-care players to fantastical innovations and excellent opium. I must keep mum about the details, but I was invited to one such den of iniquity that attracts the world’s best players of games, from Schenectady to Bayonne. On the night of my visit, the throng of parlor-heads lucky enough to be present were afforded a glimpse into the undeniable game of the future: Tiddlywinks. Also known in the underground scene as Spoof, Jumpkins, Flipperty Flop, Alley Smackers, Gutternutter, Chipsies and Drunken Dutchman, the aim of the game is to use a flat disk known as a squidger to flick smaller flat disks called winks into the tiddly pot in the center of the table. Sound simple enough? Not so fast, because while you’re focusing on squidging your own winks, the other players will be aiming to block you by squopping, a move whereby another player causes one of their winks to come to rest atop yours. No doubt, you see the appeal. This game is in its nascent stages, but within a generation or two, I guarantee it will be our country’s national past-time.

That’s all, for now. Rejoice, friends! For despite the strains of raising children in these modern times, we find ourselves living at the zenith of merry-making. Truly, the human imagination cannot possibly conceive of anything grander than the games described herein. I should know, because I am a human and I can’t fathom anything since my trip to that illicit gaming club. One could hardly take a breath without inhaling a lungful of sweet opium smoke. The things I do for you, beloved readers!

Aloysius Edwards has traveled widely across the United States – and to countries around the world that are accessible with dignified comfort – in search of fascinating games and other forms of idle amusement. He has written three books on the subject: The Encyclopedia of Games for Good Boys and Girls, Appropriately Segregated by Gender; Who Says War Can’t Be Fun? A Review of Games Invented During the War Between the States; and How to Spot a Card Sharp and Other Loathsome Villains Who Ruin Everyone’s Fun. Aloysius lives in rural New Jersey with his wife and thirteen surviving children.