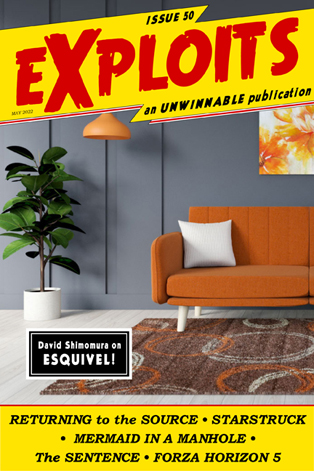 This is a reprint of the Books essay from Issue #50 of Exploits, our collaborative cultural diary in magazine form. If you like what you see, buy it now for $2, or subscribe to never miss an issue (note: Exploits is always free for subscribers of Unwinnable Monthly).

If I had known that The Sentence by Louise Erdrich would crack my seal on Covid-19 fiction, I’m not sure it would have hit in such a satisfying way. This is no endorsement of spoiler-phobia, but an observation of how inculcated I’ve been against confronting our pandemic reality in books or movies. I can’t say this was a conscious decision of mine either — I wasn’t seeking out anything that was dealing with the virus directly (and this is but one of many realities reflected in the book), but neither were my regular haunts eager to crack a coronavirus storyline.

Erdrich had no such hesitation. The Sentence is breezy fiction from an established master of the craft. This isn’t to say it’s fluffy, but rather a novel that pops a sail and catches the wind and glides. We follow Tookie, a Native American woman caught up in substances and thin friendships who is eventually jailed for a laughably grim heist. From there, due strictly to the communal generosity of incarcerated women, she figures some shit out and is granted early release. She finds work in the fictionalized version of Erdrich’s real-life bookstore, the first sign that this story would ride a familiar timeline, but is also soon haunted by a recently-passed long-term customer named Flora.

There is a lot going on in The Sentence, and it’s a testament to Erdich’s ability to conduct such a large and well-drawn cast of characters. She is drafting a community using only the most pertinent details, leaving me wanting more from each of them but strictly in the same way a good meal does; satisfied but not overfull.

I am so early and deeply invested in Tookie’s tale (and oblivious to how closely the historical record would match our own) that I’m left wide open to the crash of March 2020 all over again. But this was a blessing, because The Sentence is ultimately about struggling through trauma, processing our past and embracing the families we are born with and those we choose. If I had been asked if I was ready to start the process of sorting through the long, slow and yet unfinished damage of our current pernicious diseases, I’d have said no. But The Sentence has reminded us that we are more resilient than we often believe ourselves to be.

“The Call of Cthulhu”