Reprinted with permission from our sister publication, the GG, now defunct but never forgotten. Author anonymous, edited by Emily Price.

To the illustrious and intelligent readers of the Gowanus Gazette,

It has been said that art is the food of the soul, and as the preeminent (and to our knowledge, only) arts and culture magazine of greater South Brooklyn, we take pride in nourishing you, our readers, with the best that the tri-state area has to provide. While we have previously stuck to the offerings within walking distance of our offices, admittedly for the last few issues we have felt ourselves falling into a bit of a local rut (see the most popular essays from our last issue, “Did this pigeon just invent abstract art?” and “East River Smells, Rated”.) The opening of the Metropolitan Museum of Art earlier this year galvanized many local publications, including the up-and-coming magazine Un-winnable, whose review we anticipate will offset the foggy tyranny of Manhattan’s critical establishment with a New Jersey perspective.

Our colleagues at the New York Times have also highlighted the various attractions one can expect when attending that museum: Mr. J.M.W. Turner’s work “The Slave Ship”, for example, described by attendees as “hurt my eyes” and “since when does oil painting have to be political?” (The second guest preferred the work of Turner’s contemporary John Constable, though a friend noted in response, “how many gardens can one man paint?”) Of course, the term “colleagues” suggests a certain equality of talent, and while we hold our friends on the small island in the highest esteem, we would be remiss in not saying there was something lacking in their analysis that has left us with a chill in our hearts, a chill that can only be remedied by a hot whiskey and Meaningful Art Analysis.

In a stroke of luck, then, the success of the Met in the last few months has inspired a new museum that has opened in our very own South Brooklyn: The Sea-Gull Gallery, a two-story establishment not five blocks from our offices. Therefore, in this Spring issue we offer you a more intimate look at the art landscape in New York City, on this humble contender to the Manhattan art elite. Will it become a fixture, or melt away like the smoke of steamships on the Hudson?

Come with us as one intrepid reporter answers this question for herself.

8:50 am: Arrive at the museum, only to find that opening is delayed by an hour. Unclear why until a custodian passes by muttering “Electric lights…. Can’t trust them.” Walk to the park to sit and read until the opening.

9:45 am: The museum opens, almost an hour late. I wait in line for half an hour more to purchase tickets. While there, I eat the egg sandwich I packed for the occasion.

10:10 am: Indoors, and the sweeping ceiling, dotted with electrical lighting, is admittedly majestic. Briefly delayed by an attendant asking where my husband is, to which I reply that he’s asked me to come edify myself by staring at art for a few hours. Elaborate patterns have been drawn on the ceiling with white chalk, imitating the whorls of Baroque architecture that populate more prestigious museums. I would ask why, but the attendant has become distracted, and I doubt he’d believe I know what Baroque architecture is.

10:30 am: The first exhibit is a large collection of photographs by locals, depicting mundane and marvelous events alike. One highlight is a series on the Brooklyn Bridge, currently under construction, which will hopefully make journeys to the city infinitely easier.

11:15 am: A series of interconnected rooms displaying a collection of oil-paintings that claim to be from France, though none of them have descriptions. On closer inspection, many of them display the maple and Callery pear trees that are our pride and joy here in New York. There is one that seems to be done in crayon. Another is simply an empty frame, with an index card inside that reads “out for cleaning”. The frame appears to be made of cardboard.

12:00 pm: Sit down on a bench to rest and write up notes. A crowd of schoolchildren goes by, shepherded by their teacher, who seems almost in tears. Their appraisal of the art is unenthusiastic.

12:30 pm: Detour upstairs to the “John Room” (paintings by artists named John). Conservatively, this is 30% of the museum’s holdings.

12:50 pm: Enter into the small collection of medieval armor and weaponry, donated by a benefactor from upper Manhattan. Audience base very similar to the John Room. I spend a few minutes looking at a very large sword, before a tall man comes to stand next to me and claims that his great grandfather had owned one very similar, and in fact that this must be the very same sword, and that the museum must have stolen it. The plaque’s indication that the sword was found in a field in South England does not help to pacify him.

1:40 pm: The most pleasant place yet, the statuary room, which is next to a large glass window on the bottom floor. The incorporation of natural light makes this space seem much larger than it is. I spend a long while here.

3:00 pm: Famished, and sure I will never come to the end of the artistic offerings displayed to me in this deceptively large building, I look for something to eat. An attendant tells me there is a cafe on the basement level, and so I shoulder my bag and descend. A lack of clear signage impedes my progress, and I walk down an unmarked hallway for several minutes before coming to a door with a large, red square painted on the front. Reading this as the institution’s symbol for food, I try the handle, which jiggles before creaking open. Inside, there are no lights. Stomach rumbling, I venture in. 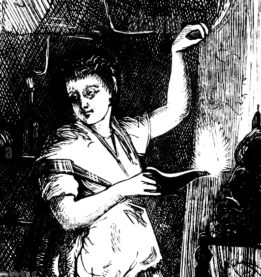 3:07 pm: It is a little lighter now, and I can see the walls of the corridor in front of me. They have turned from brick to some kind of wet stone. It smells fresh, like a river. I try turning around, but I see not one but four tunnels branching out behind me, and I can’t remember which I came from. No use but to go on.

?? pm: My pocket-watch has stopped working. I swear it’s getting lighter as I walk. The wet walls glow with a phosphorescence, almost like luminescent fur.

?? pm: I have been in these twisting hallways for longer than I can remember. The layout of this building makes no sense. It is much larger on the inside than it appears on the outside. I wonder if I am walking somewhere under the street…

???: Feeling my way along the corridor, I come to a ring of oil lamps placed on the floor. Just beyond their light, huddled figures gather. They have not noticed me yet. I am going to approach, and hope to find them friendly. Their ring glows invitingly with hazy, purplish light. If I listen close, I can hear singing.

Several days after our reporter failed to return from her assignment, we received a package containing her notebook, a grease-covered handkerchief, and an unmarked packet of matches.

Above all, we can recommend the Sea-Gull Gallery heartily as an intellectually and spiritually edifying experience, though it appears the culinary situation leaves much to be desired. Four stars.

Editor’s note: Readers of this piece later described it in letters to the editor as “bizarre”, “performance art” and “completely unhelpful”. The New York Times declined to comment on the somewhat aggressive posturing, and it’s possible the article never came to their attention at all. The anonymous reporter was never seen again, but several weeks after this article came to print, a bakery opened opposite the Sea-Gull Gallery, taking advantage, it seems, of hungry customers.

Emily Price is a writer and editor with a peculiar collection of medieval ephemera and a taste for mystery. She can be reached by telegraph @the_emilyap.