I spend a lot of time thinking about what bar I’ll go to post-vaccine.

Now that I haven’t been to a bar since February 2020, I am desperate to lean my elbow in a pool of stale beer while being ignored by the bartender, to touch something sticky in a graffiti-covered bathroom and spend the rest of the night feeling slimed, to yell over the din of drunken vultures trying to steal my barstool.

Arthur Morgan, the hero of Red Dead Redemption II, takes his friend Lenny to a saloon, an effort to take Lenny’s mind off their outlaw crises. They agree to have only one drink, “no big drama.”

Then they have “just one more drink.” 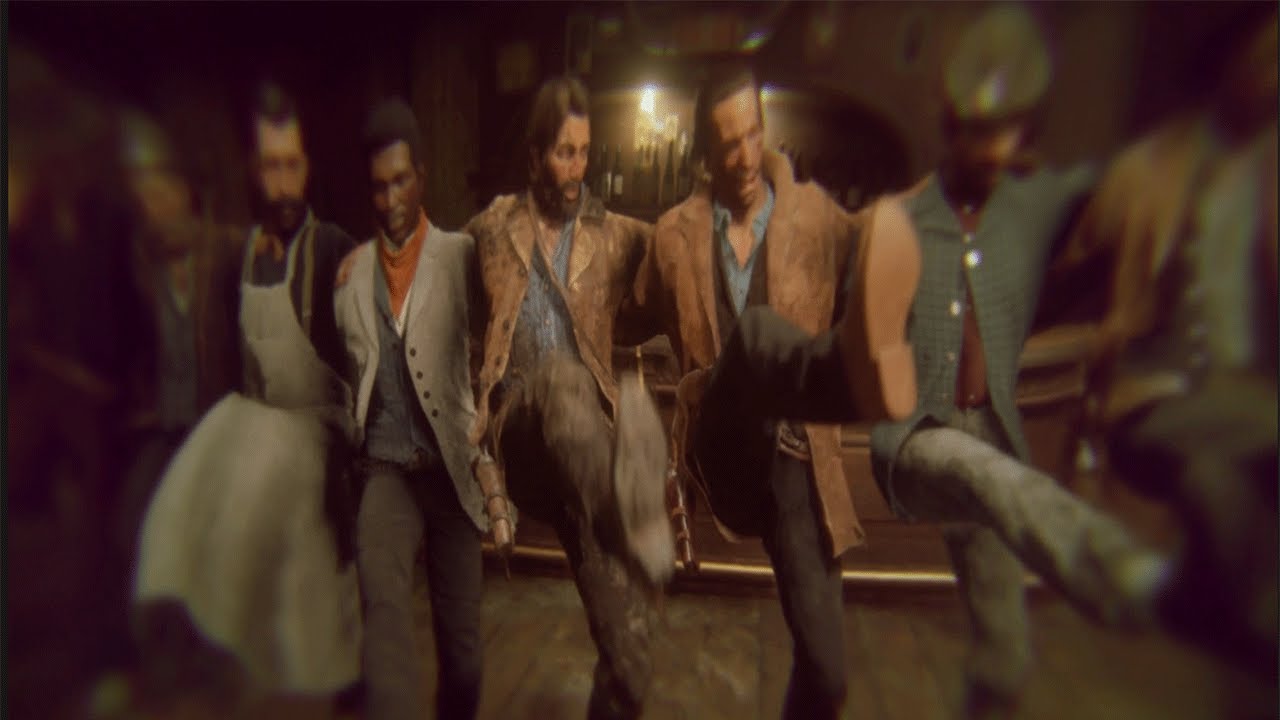 Then the camera starts to careen from one scene to another: Arthur and Lenny are taking shots; they’re sitting at the bar; Arthur is leaning over a piano player and cackling. Suddenly, Lenny is nowhere to be found. Arthur starts wandering around, looking for Lenny. At this point, you’re controlling Arthur’s movements – a little sluggish, a little bit impossible to walk in a straight line. You can control who Arthur asks about Lenny, and how often Arthur yells his friend’s name. When you approach a stranger, your dialogue options are “Lenny?” or “Lenny!”

All the while, a twangy, optimistic guitar increases the feeling of benign bumbling. (I wish I could overlay the soundtrack onto this article, but since I can’t, here it is).

Arthur keeps wandering; Arthur interrupts a couple having sex in an upstairs room; Arthur finds Lenny on the balcony. Lenny drops a shot glass into the room below. They keep drinking, swaying on the balcony. “Why ain’t you never married?” Lenny asks.

“No one would have me,” Arthur says.

Arthur looks up and Lenny is gone again.

I played this scene sober, but it felt more like being wasted than any other drunkenness functionality I’ve experienced in a game. Your movements are dawdling and imprecise, no matter what your controller sensitivity is set to.

Arthur hears a fight coming from downstairs. Some assholes are threatening Lenny, who’s perched defensively on the bar. Arthur confronts an asshole, who says, “Shut your mouth, mister.” The camera lurches and suddenly Arthur and Lenny are line dancing with all of the assholes. Light warps. A stream of piss arcs in front of you. Arthur’s outside now, peeing behind the bar. All straight lines are gone: the building’s planks, its doorframe, and every once-familiar object curved and misshapen.

Arthur walks in on another couple (or the same couple?) having sex, but both partners are now Lenny. Arthur runs screaming from the room, covering his eyes. 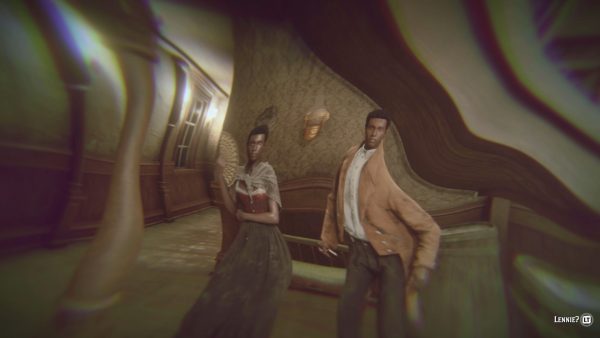 Your options are now “Lneny?” or “Lenny!”

Your options are now “Gret” or “Lemmy?”

The real Lenny finally finds Arthur and they get into a slap fight in the middle of the saloon. The camera swings, and they’re sitting together as Lenny pats Arthur’s back and says, “You’re a good friend to me.” They drink. A stranger takes a drink out of Arthur’s hand. The scene warps and Arthur is dunking him in a water trough outside. You can choose to drown him, or not. Arthur and Lenny roll around in the mud. Lenny pukes. The law shows up, trying to grab them. Arthur runs away – leaving Lenny – yelling, “You’ll never take me alive!”

Arthur wakes up passed out on the ground. He calls himself a moron and vomits in the grass.

It’s good for me to remember the bad parts about having one too many at the bar.

That’s something I don’t miss.

Writing About Games: Learning to Love the Compromise
Previous Post