We’re back with another installment of Versus Mode, where we pit two board games with similar loglines against one-another to see which one comes out victorious! This time around, we’re looking at two card-based games wherein you play as comic book villains trying to go on crime sprees without attracting too much attention from the hero who constantly thwarts you – it’s Batman: The Animated Series – Rogues Gallery from IDW Games versus Sinister Six from Spin Master!

This Versus Mode happened somewhat by accident because, to be honest, at the time I played Rogues Gallery, I had never so much as heard of Sinister Six. Once I had played them both, though, the startling similarity of their concepts was enough to make me briefly wonder if they shared a designer. (They don’t appear to.)

The idea, in both cases, is identical. You take on the role of one of the recurring villains from a comic book hero’s rogues gallery – the Caped Crusader in the case of the former, Spider-Man in the latter – and attempt to pull off a series of crimes before you get caught. In both cases, you accomplish your goals by spending resources that match the criteria on cards that you draw. In Rogues Gallery, you’ll be spending dice. In Sinister Six it’s cards. If you fail, you get either “arrested” or “captured,” depending on the terminology used by the game, and lose any ability to profit from that caper while you’re in the clink. 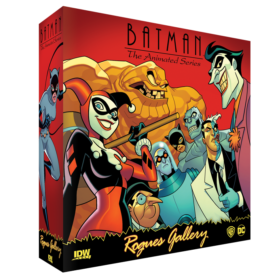 In both cases, the mechanic boils down to a certain amount of “press your luck,” with increasing risks corresponding to (potential) greater rewards. Both games even oblige you to have three or more players to get involved, and would likely play best at five or six, respectively. (It’s not called Sinister Six for funsies, after all.)

The key differences come from precisely how these elements play out on the table. In Rogues Gallery, each player gets their full turn before the next player goes. They start by rolling a pile of dice, which they then spend to defeat heroes who are drafted, one by one, from a deck of hero cards. Each hero requires a certain die face or certain combos of unique dice to be defeated, and each defeated hero reaps ever greater rewards but also draws you ever closer to a confrontation with Batman. You’ll fight Batman sooner or later, no matter how well you do, but you’ll need to have shepherded plenty of resources by then if you want to take him down.

Beat Batman, though, and the game is over, you win! And even if you do get arrested, you’re a Batman villain, so you break out of Arkham in short order with fresh schemes and some new accomplices that you’ve recruited while inside. It’s an easy game to play and learn, it plays fast, and it’s over in relatively short order. Plus, the fact that each player operates largely independently of the others means that it is rarely especially competitive, with each player simply attempting to do the best by themselves on their turn.

Sinister Six is another story. In it, you’re trying to pull off a series of heists using the cards in your hand. While each villain in Rogues Gallery has a special ability, the villains in Sinister Six have more uniqueness from one to the next. And while Rogues Gallery is a breezy game to play, Sinister Six is grueling. Which is not to say that it isn’t fun – it might actually be more fun than Rogues Gallery – but every decision is a difficult one, and every victory feels hard-fought.

Sinister Six is also both more collaborative and more competitive than its DC doppelganger. While each player’s turn feels largely isolated in Rogues Gallery, no one player can pull off the heist alone in Sinister Six. Each plays a card on their turn, managing to knock out some of the requirements of the heist, while also positioning themselves (they hope) first in line for divvying up the loot (or spiriting some of it away before anyone else can get their hands on it). However, it will take several players working together to crack the heist and move on to the next one. 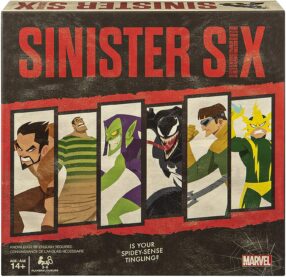 Because your resources are comparatively scarce, you will find yourself making difficult decisions about when to simply fold, allowing yourself to get captured and not split the take, rather than commit more resources to what looks like a losing prospect. To say that it is a much more tactical game is to put it quite mildly. (The suggested age range on Rogues Gallery is 12+, while on Sinister Six it has jumped to 14+. That may not sound like a lot, but the massive change in our lives between 12 and 14 says a lot about the changes in complexity between the two games.)

In both cases, gameplay is only one aspect of what’s going to draw a buyer. Ultimately, these are branded products that are going to appeal to fans of that brand. In that regard, both acquit themselves nicely. Rogues Gallery is themed around Batman: The Animated Series and, along with its core roster of playable villains, features a who’s who of familiar faces among its accomplice and hero cards, from the Phantasm to Man-Bat to bit players like Maxie Zeus. Perhaps best for fans of the show, all the card art is new for the game, but done in the style of the popular series.

Sinister Six doesn’t have any quite so specific single source to draw from, but it nonetheless establishes an appealing, stylized aesthetic that plays out in all of its cards. And while one could ask for more variety in the illustrations on the ability cards that each villain gets, the range of villains is everything that could be desired, from classic members of the eponymous team to other Spidey foes like Venom and Kraven.

So which game comes out the winner? For me, it was Sinister Six with its skin-of-your-teeth heist mechanic, but I also think that it might either take more players or some house rules to really sing. Rogues Gallery has some definite advantages in that it is easier to play and relies less on lots and lots of fiddly little tokens, and the art style is a delight, but it could use a rulebook that is a little clearer.

Candles Against the Dark: Surviving the Night (and Each Other) in Deranged
Previous Post