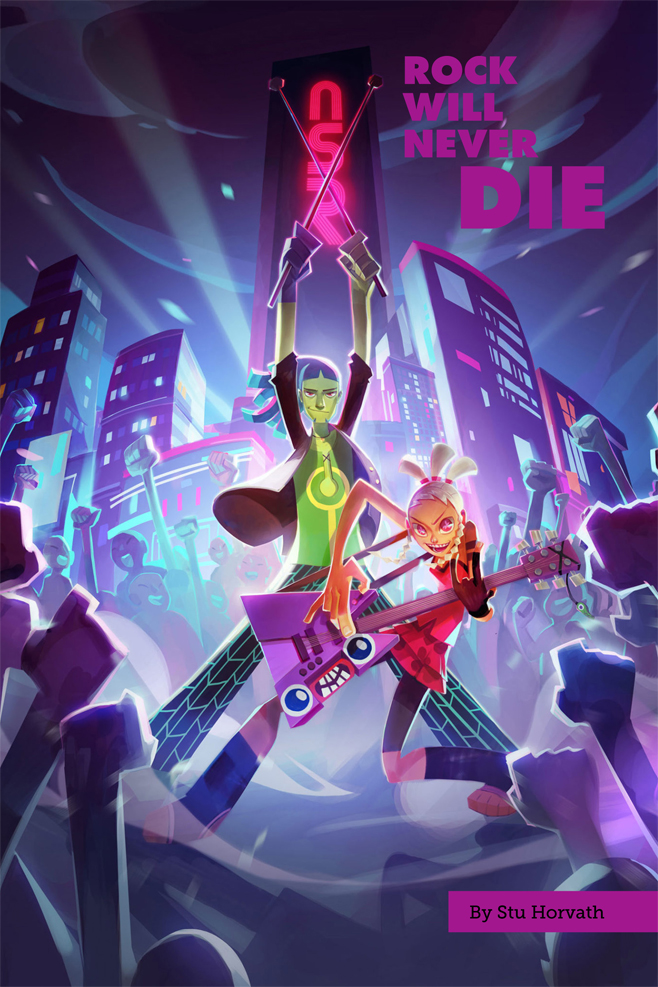 I don’t know if you’ve heard, but rock and roll is dead. The early 2010s marked the rise of electronic dance music’s domination of the pop charts. The kids don’t care about guitars anymore. The guitar gods of the 60s and 70s are old and tired and shuffling off this mortal coil. Gibson, the maker of the legendary Les Paul, declared bankruptcy in 2018.

If it isn’t dead, then surely it is dying. Forget all the rock bands that still record, that’s an evolutionary dead end. They’ll be extinct soon enough. If rock was born with the release of Sister Rosetta Tharpe’s “Strange Things Happen Every Day” in 1944 and died tomorrow, well, 76 years is a pretty good run. Rest in peace.

Except, come on, anyone who has ever heard an electric guitar wail knows rock’s not dead. All that “boo hoo the kids don’t play guitar anymore” stuff is for boring grayhairs with a nostalgia jones. Rock’s never going to die. There is always going to be some misfit who comes along to shake things up, who pulls the spotlight back onto the guitar for a minute, who reminds folks that rock in all its variations is alive and well and doesn’t need your Top 40, thank you very much. 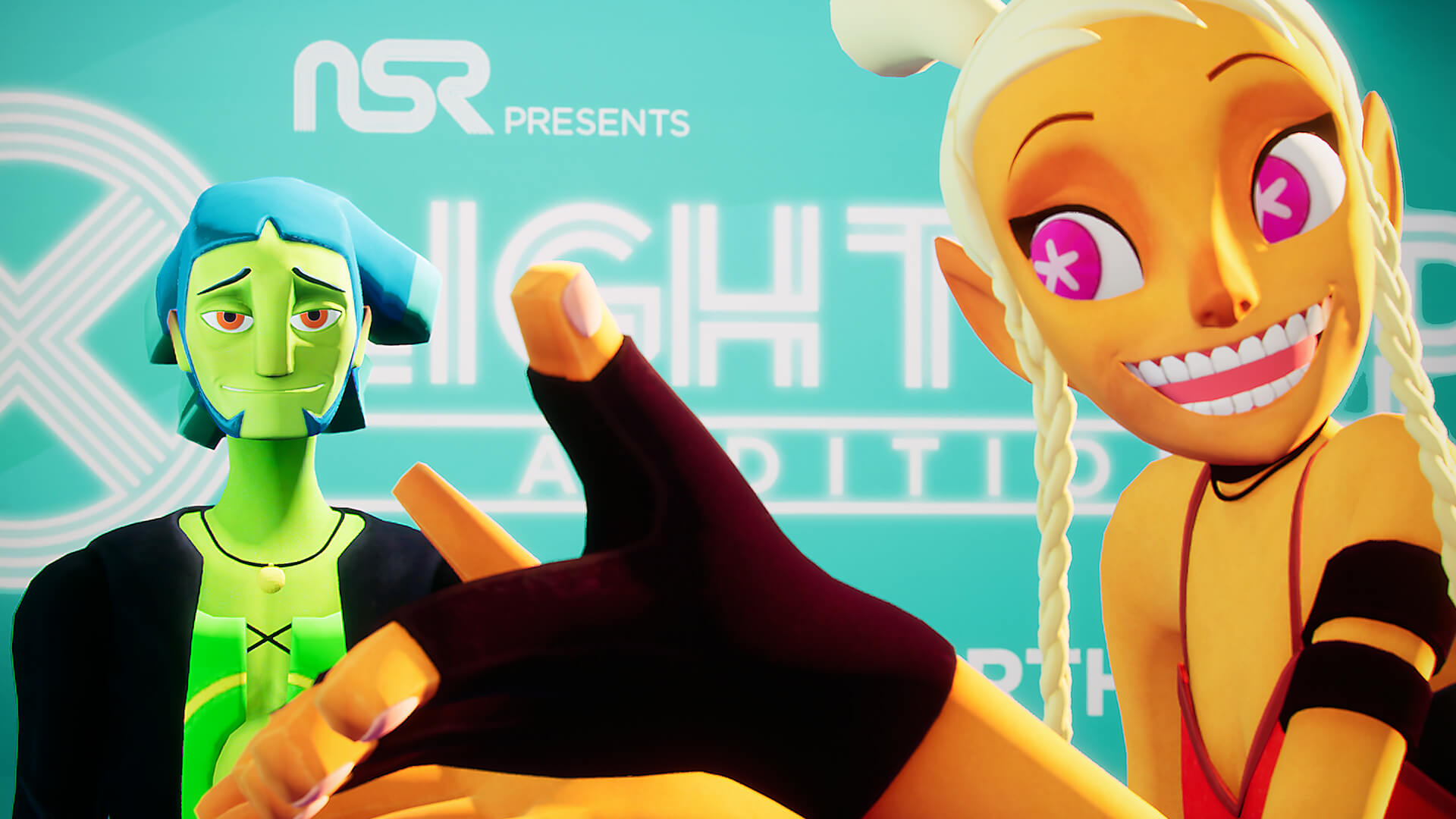 That’s the premise of Malaysian developer Metronomik’s forthcoming videogame No Straight Roads. EDM has taken over the airwaves of Vinyl City, thanks to the music corporation No Straight Roads, and it falls to the rock band Bunk Bed Junction to take back the city with their riffs. The two-piece – Mayday on guitar, Zuke on drums – square off against NSR’s stable of EDM recording artists, including a boy band, a space themed DJ and a child piano prodigy, to rock Vinyl City district by district.

The initial idea for No Straight Roads came from Metronomik co-founder Wan Hazmer, spinning out of conversations with his cousin, co-founder Daim Dziauddin, while they both worked in Japan for different game development studios. “Hazmer had this idea of wanting to make a game where the music plays the center stage in the narrative,” explains Dziauddin, who also acts as the creative director of No Straight Roads. “He said, ‘Wouldn’t it be cool if the enemies are EDM-based?’ Like having some crazy dubstep music that gets louder and louder as you battle the enemies. That’s how it started.”

Dziauddin stresses that No Straight Roads is a music based action game, not a rhythm game (though it can be a rhythm game if you want). The enemies follow the music, but you don’t have to. Fighting a boss, say, follows a pattern, just like any other action game, but since the boss’s attacks mirror the music, you can listen to the beat and anticipate when the next attack is going to come, rather than puzzling it out through trial and error. You might not know what kind of attack is coming, but you’ll know it is on the way.

For folks who have more experience with rhythm-based games, though, there is a layer of skill in the game they can take advantage of in the parry system. Parrying is done precisely on the beat and reflects attacks back at the boss. So if you bring that kind of experience to No Straight Roads, the game can accommodate you. But if that isn’t your bag, that’s fine too – just avoid attacks instead of trying to parry. 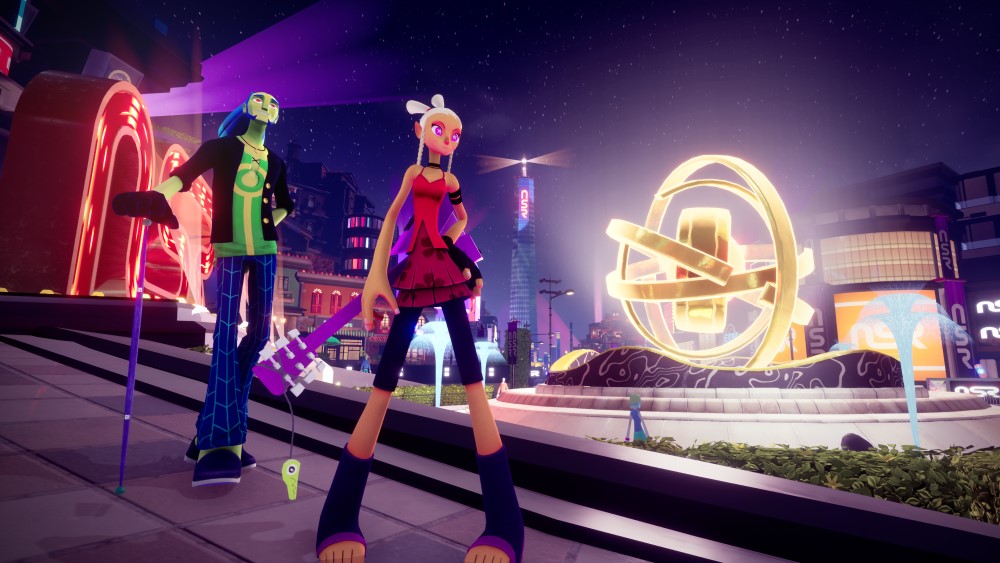 “Creating No Straight Roads was definitely tricky,” says Dziauddin. “Unlike other games, everything in the world has to be timed to the beats: boss attacks, gameplay phases, even certain cutscenes. We have our own in-house calculation so that we know how much an enemy should move based on the different beats per minute. Thankfully, our music director, Falk Au Yeong, was a huge help in making us understand the fundamentals of music and its proper implementation in our game. I’ve learned some proper music lingo along the way too!”

The music isn’t the only appeal of the game, though. No Straight Roads boasts energetic, colorful visuals.

“We wanted it to be loud, vibrant, and zany,” says Dziauddin. “We felt that was the best way to reflect the craziness of the game, a game where you fight people with the power of music. Hazmer and I have a soft spot for Dreamcast-era games, so we took a lot of visual references from there. Jet Set Radio, Space Channel 5. We also loved the 90s Tim Schafer adventure games, so you can see a lot of influences from those titles too.”

Music, at least rock music, is rarely a solo pursuit, so it follows that No Straight Roads would offer couch co-op so you can jam out with a pal. It was originally designed as a single player game, though – it wasn’t until the public got a taste of the game at Tokyo Game Show 2018 that the team got inundated with requests for co-op. That had always been in the back of the team’s minds, but having fans cheer it on was the nudge they needed to implement the feature. 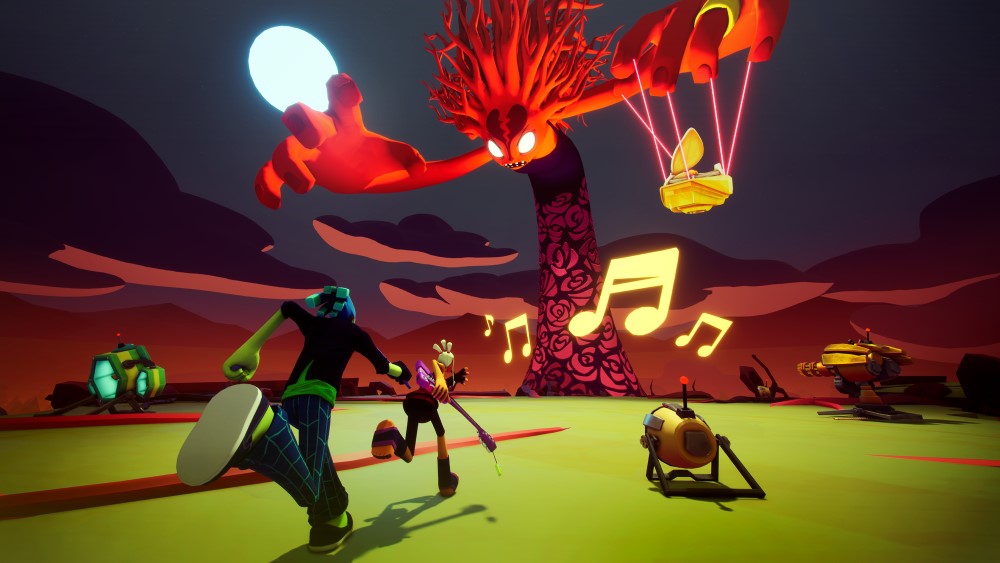 The co-op is a natural fit for a music game. Music is often described as a thing that literally brings people together – as a couple kids jamming out, as a band practicing, as a person joining a crowd at a concert. “You’ll meet people who you never imagine of encountering at such places,” says Dziauddin. “I’ve met my share of interesting people including fans and the artists themselves, it’s a great experience. It’s just like any other hobbies: videogames, football, photography. Having a place to gather and share your passion in music with strangers is a wonderful thing. I especially love the smaller, more intimate venues!”

Of course, No Straight Roads is being released during a moment in history that has seen most if not all the pleasures of live music vanished as the pandemic and its quarantines and shutdowns have left most people wary of being in proximity to other folks. It will be interesting to see if the game can help scratch the live music itch for players.

Dziauddin cites Queen, Franz Ferdinand and Radiohead as his favorite bands (though the soundtrack to Streets of Rage 4 is in his heavy rotation). Despite creating a game saturated in music, though, he feels he is firmly a fan rather than a musician. “Music has been a huge part of my life since I was young,” he says. “Even though I am not skilled enough to perform, I do play the piano, bass guitar and drums. Haz and I used to play in a casual band where he played the drums and I played the bass. Again, we didn’t perform; it was just for fun. Even in my student years (I studied 3D animation in England), I always animated my scenes to follow the music. It’s important to Hazmer too, hence why we created our studio to focus our products around music. No Straight Roads won’t be the only one!” 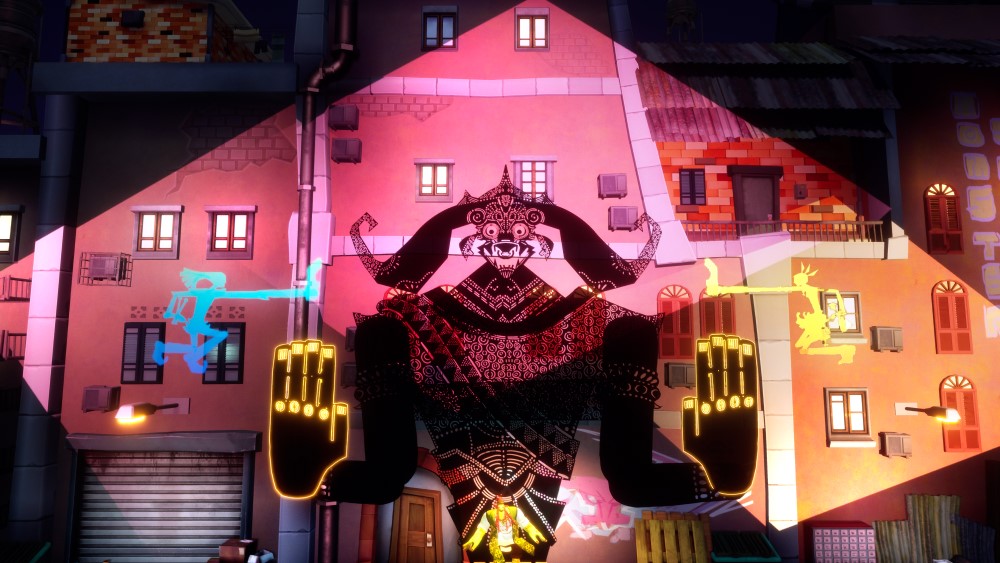 At first glance, you might wind up thinking that there has to be an adversarial relationship between rock and EDM. Sure, the bad guys in No Straight Roads love EDM, but that also means the game is saturated with EDM.

“We didn’t make EDM the villains in our game because we hated the genre,” says Dziauddin. “On the contrary, we love the genre so much that we thought it would be cool to have them as the central theme of our game.” That makes sense. Imagine how miserable it would be to create a game like this if you actually hated EDM. In No Straight Roads, it isn’t the music that’s the villain, its the corporation.

It is easy to reduce things to binaries, to characterize everything as a battle, to assume that the current popularity of beats comes at the expense of guitars, that rock is dead. The fact is that music is always changing. The role of the guitar used to be front and center, now it is slipping out of the spotlight (the same thing happened to violins, pianos and harpsichords over the centuries), but just about every performer’s live act is backed up by band that has at least one guitarist. The heaviest of metal dudes listen to Lana Del Ray. The truth is that there are no straight roads with music. The bad guy is the one telling you there are rules about what’s popular and what you should like.

“I would like to think that if any rivalries do happen among the fans, it should come from a place where there is no malice,” says Dziauddin. “Differences should be celebrated, not confronted.”