It is often said (for example, by Phil Gelatt, earlier in this issue), that a horror story is at its most powerful when the audience is thoroughly in the dark. The monster has kept to the shadows. No one knows what’s going on. Help isn’t coming. Emotions spike. Panic sets in.

As soon as the unknown becomes known – the monster revealed, the curse explained – we relax. Information helps us regain our footing.

Now imagine a horror story that never lets you see. At all. That’s the main conceit of Perception, from The Deep End Games, which follows a blind woman, Cassie, as she investigates a haunted mansion. Perception is a game about gathering information to solve mysteries (What events led to Echo Bluff’s haunting? Why is she trapped there to begin with?) while lacking the main component for videogame exploration. Instead, Cassie perceives her surroundings using a kind of echolocation, where sound creates visuals.

The twists, of course, is that Cassie can’t always trust what she “sees.” Worse, something is in the mansion, stalking her, so making noise to “see” is risky. “It creates tremendous tension,” says developer Bill Gardner. “You are hungry for that information, but to seek it out brings risk.”

Gardner, a twelve-year Irrational Games vet, founded The Deep End Games nearly two years ago. The idea was to start a small studio that would continue making games in the same vein as Irrational and, to that end, Gardner kept many of his old teammates together. Jim Bonney, Irrational’s music direction, for example, handles Perception’s audio, a key part of the game. Robb Waters, the man behind the concepts of the Little Sisters, Song Bird and so many other BioShock staples, is working on the game’s concept art. There are others. As Gardner says, “The Deep End is about keeping that momentum going. I’ve worked with tremendous talent over the years and in a lot of ways, we’re sticking together. And with The Deep End, I’m able to work with folks that I’ve wanted to for years. People like Ben [Johnson, designer], who worked on Dead Space, and Amanda [Gardner, writer], who I’ve collaborated with my entire career. It’s kind of a dream setup.”

Bill was kind enough to take time out of Perception’s development to chat about the game, horror and echolocation.

How did blindness and echolocation come to be the central concept of the game? Does this presentation of blindness have any correlation to real-world blindness?

Bill Gardner: The idea to create a game with a blind protagonist came about from a desire to put the player in a different pair of shoes – to show the world in a different way. I feel that too often we’re seeing games from nearly identical viewpoints, which frankly, is a huge missed opportunity. Hence, Cassie. The other piece is that a blind protagonist allows us to shake up how we present narrative and present some unique mechanics and a fresh aesthetic.

The style of the game came out of a lot of research, but also based on quite a bit of trial and error. Obviously, no one can really say what echolocation “looks like,” but we’ve had conversations with a lot of people in the blind community, including Daniel Kish, from World Access for the Blind, an organization that teaches blind people how to use echolocation. The result is that Daniel, despite being completely blind, mountain bikes. Meeting him was as educational as it was inspirational. 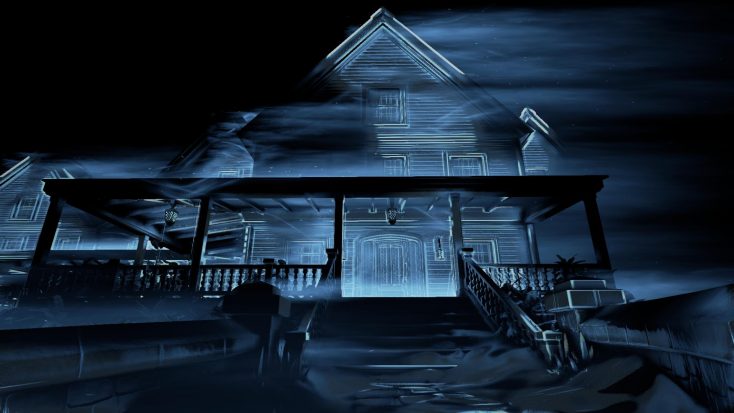 What inspired Perception? I was pleased that the Presence reminded me a bit of the reaper in The Frighteners. The lack of combat also reminds me a bit of the Amnesia games. What other movies, books and games have you drawn on?

B. G.: You may be the first person I know mention The Frighteners!
Our inspirations are quite diverse, but some of our staples and major touchstones include: The Shining, The Thing and Memento. Amanda’s writing is very inspired by Joss Whedon as well. What it all comes down to is that we’re constantly looking for tiny little bits of inspiration in odd places. The aisles at Home Depot, a restaurant on Parts Unknown and a whole lot of classic literature (Amanda did teach high school English for 10+ years, after all). We try to layer our inspirations in to varying degrees. Some are overt, while others are deeply seeded. You’ll find a few references to “All My Sons” for example. We hope the richness of the narrative comes through! 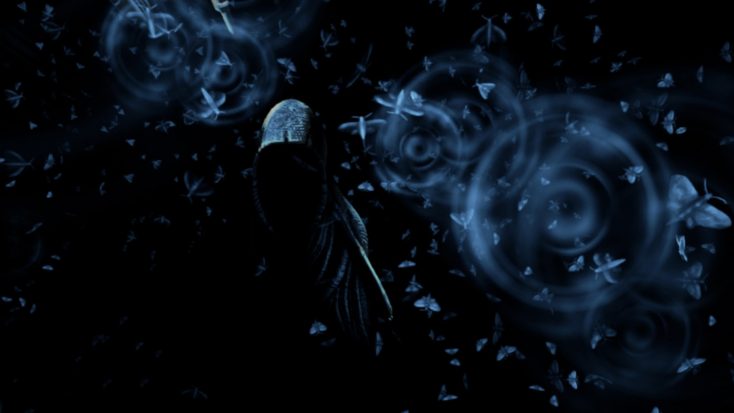 I tend to think the best horror stories start in a place of isolation. In Perception, Cassie not only isolated in a mansion, but also isolated by her impairment. Can you speak that?

B. G.: I couldn’t agree more. You probably noticed that two of my bigger inspirations were The Shining and The Thing, two films about the most extreme isolation imaginable. I’ve always been drawn to this theme (see Rapture), it allows for much tighter focus, which I feel yields greater immersion. The Shining starts off about a family of three, and we get to know them very well, but the stillness of each scene allows us to study them and to be in the moment. It naturally allows us to notice detail and heightens tension. You find yourself leaning in looking for clues in the world. Each nook and cranny of The Overlook has a deep history. We are trying capture a lot of these feelings in the mansion at Echo Bluff.

Can you explain how the game changes with multiple playthroughs?

It’s not meant to be a game with multiple endings or anything like that – we have a very specific story we’re telling. That said, there is a lot of detail in the world and as elements of the narrative come to light, they take on additional meaning. I believe there will be a very different appreciation for the world once you’ve made it to the origin of Echo Bluff and the game’s mysteries. The game doesn’t rely on Shyamalan-type twists, but it does have a number of huge surprises that will alter the way you view the game. 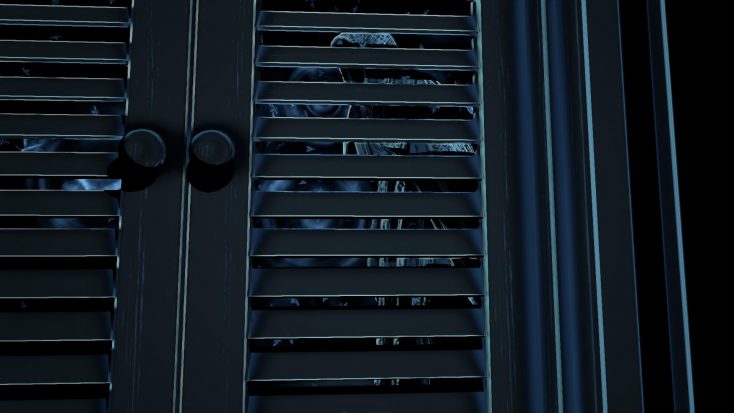 Was it challenging to design a game so lacking in color? I noticed in the Kickstarter you have color concept art – is the solarized effect layered on top of existing colors?

B. G.: Honestly, focusing on composition and silhouette rather than color is refreshing, but the game does have a lot of color beyond the blue. We are using color to communicate a number of important mechanics including Cassie’s mood. When Cassie feels threatened, the world gets more and more red. On top of that, everything Cassie knows to be true appears in green, so her hands, her phone and anything she’s holding. Further, Cassie will often remember key items in the world and those will appear in ghostly green. In a lot of ways, we are leveraging opportunities that many games miss. Color doesn’t have to be strictly about being pretty, it can enhance the gameplay too!

Did feedback from the Kickstarter campaign change your development in any way?

B. G.: Absolutely! I take feedback extremely serious. After all, I did build the UX department at Irrational. I believe you can’t make an amazing game if you don’t listen to your audience. I saw Kickstarter as an amazing opportunity to get feedback right off the bat and enhance the game. In one example, some fans saw our trailers and were surprised by how much Cassie, our lead talked. We’re very confident in Perception’s story, but honestly, I had overlooked the fact that most horror games have relatively silent protagonists. Then it occurred to me we could add in an option that allows people to choose to play as Cassie as we originally intended, or a more traditional silent protagonist. In the latter mode, she’ll still talk, but mostly for plot-critical lines. It’s an example of where feedback can greatly enhance the experience for everyone since this was a relatively simple update. 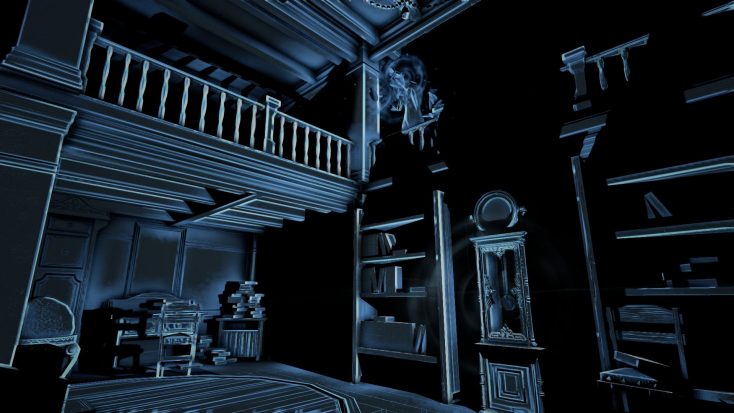 Your previous credits include BioShock and Dead Space – classic horror games. How did those games inform the development of Perception?

B. G.: I was the Lead Level Designer on BioShock and Design Director/UX Specialist on Infinite. Ben was a designer on Dead Space, so I’m afraid I can only speak to that as a big fan. But obviously, I can talk at great length about the BioShock series. I worked on those two games for about seven or eight years, so it should go without saying that they left a HUGE impression on me. They are effectively part of my DNA. And I’m very thankful for that because it has made creating Perception feel natural.

Perception is very much its own game, but when people play it, they often come away saying “that has a very BioShock feel to it.” I honestly think that is almost unavoidable given how much time I spent on the series. I think back to everything I learned working on them, and to the things I am still learning upon further reflection, and I am ecstatic to be able to continue to evolve certain elements and to put my own personal spin on them. Like blindness! In many ways, the Shock series is about sleuthing around and digging up information on the world and its characters. With Cassie and echolocation, we have come up with a way to make that exploration even more meaningful. 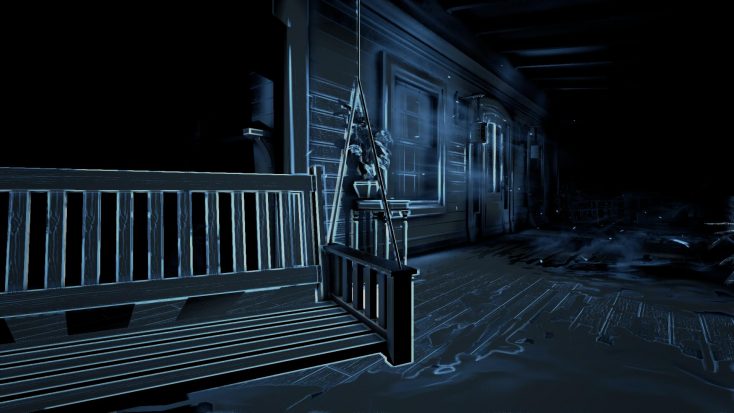 Why pick Gloucester, Massachusetts, for the setting?

B. G.: I love Gloucester. And the entire North Shore of Boston, really. I grew up here and most people you talk to agree that there’s something in the air up here. Between the history, the geography and how it sits on the ocean and forests, it exudes something. It just has that Overlook feel. Perhaps that’s why many of horror’s best are from the area. From King, to Lovecraft, and even Poe, there is just something here that demands the genre.

How does Unreal Engine help in developing a game like Perception? Are there any unexpected benefits or challenges?

B. G.: We are absolutely in love with Unreal 4. I’ve been using Unreal for over fifteen years and the continued improvements are amazing. With each iteration, it becomes more intuitive, powerful and easier to use. And the responsiveness from the team at Epic has been fantastic. If I have a question about the current iteration, or where it is going, there are many, many ways to get a clear window into things. This is the engine of choice for indie and AAA. Heck, I often find myself greatly overestimating how long this will take since Epic has done such fantastic work making things as streamlined as possible. The tools to empower designers are particularly amazing. Beyond that, I continue to be floored by how helpful the tools are for things like VR and consoles. Love this engine!

B. G.: Aside from gloat? Honestly, it did allow us to explore some very exciting features we would not have otherwise entertained. I can’t really get into it right now, but we were able to make a significant improvement to our sound content. We’re stoked to wow people.