Mis(h)adra is a hard novel for me to review. At first, I didn’t plan on recommending it at all. I thought of mildly valid excuses: the ending third carried too much exposition, some of the protagonist’s relationships could have been fleshed out more, the pacing was a little lopsided, all things to dismiss it, and move on to something else.

But Mis(h)adra stuck around, bouncing around in my mind, demanding to be seen. And once I finally noticed some part of me was trying to dismiss Mis(h)adra, I took some time to realize why. Mis(h)adra triggered me.

I have been triggered by one other novel in the past: Tara Westover’s excellent memoir Educated, which I still highly recommend. Admittedly, I was reading Educated while travelling alone, flying on a plane (I do not like flying). While Educated reminded me of past family trauma, Mis(h)adra reminded me of past trauma surrounding mental illness. While I’m still recommending Mis(h)adra, be aware of the novel’s trigger warnings, and examine your own experiences before reading.

Mis(h)adra is the story of an Arab-American college student named Isaac. Isaac wants to live a regular college life. He wants to go to class, hang out with friends, party, and have a good time. Unfortunately for Isaac, he has a hard time doing any of these things because he has epilepsy. As such, Isaac is vulnerable to and suffers from intense epileptic seizures. As Isaac states early on in the novel, “My seizures are triggered by lack of sleep, intense physical or emotional stress, or sometimes even anxiety about epilepsy itself. One or any combo of these things can give me an aura, which can lead to a seizure.” 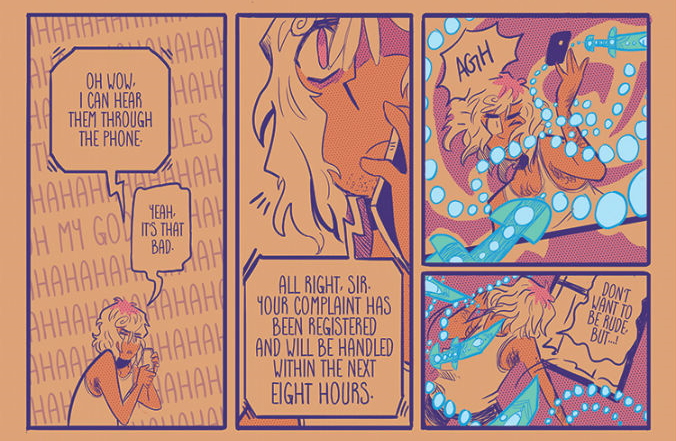 The auras Isaac experiences take the form of spectral blue daggers that hover and threaten him. Each dagger is depicted with a dotted blue trailing cord, and a large eye in the center of the blade. When Isaac experiences a seizure, these daggers attack him, slicing, cutting, and stabbing Isaac in horrible scenes of intense agony. It’s both artistically evocative and personally horrible to take in. These scenes were especially hard for me, as someone with trauma around self-harm.

You see, although Isaac’s seizures are involuntary, much of Mis(h)adra’s conflict revolves around Isaac’s depression, his relationship to his epilepsy, and his will to live. There are scenes where Isaac doesn’t put up a fight, and, when faced with his spectral knife aura, gives up, allowing the knives/seizure to attack him. There are scenes where Isaac is depicted harming himself with these spectral knives. They’re devastating and chilling.

Isaac’s struggle with his epilepsy is compounded by his lack of familial support and his fear of being misunderstood. His father intentionally forgets that he even has epilepsy, and consistently tries to downplay or dismiss his son’s need for help. His doctors are constantly talking down to him, acting dismissive or downright hostile. Perhaps because of this, and because of everyone’s lack of knowledge around epilepsy, Isaac mistrusts all of his peers. Instead of making friends and building his own support system, Isaac pushes people away. He tries to take care of himself by himself, assuming others he lets in will judge him or be inconvenienced by his epilepsy. He is afraid of being defined by his epilepsy, but he is also afraid that his epilepsy will continue to be his singular, life-defining trait. 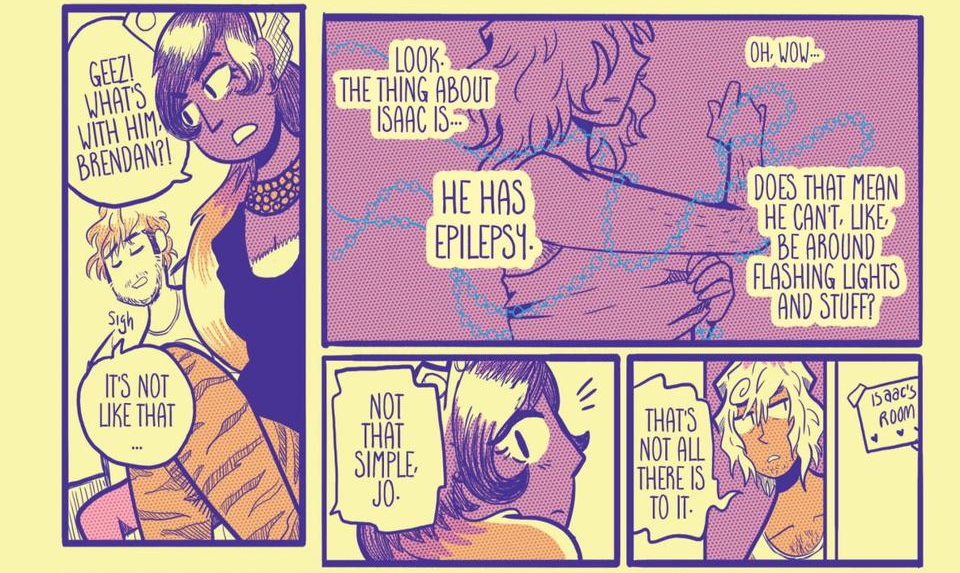 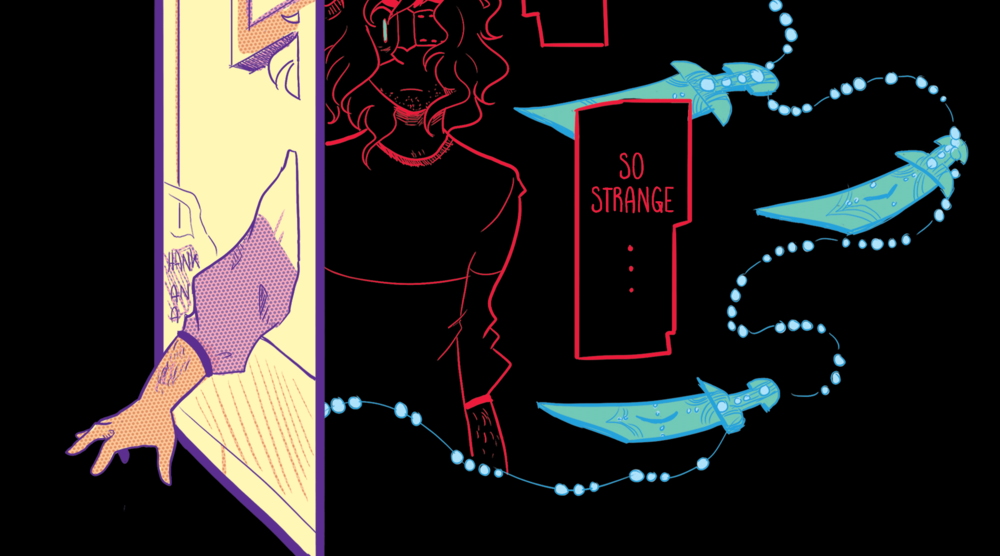 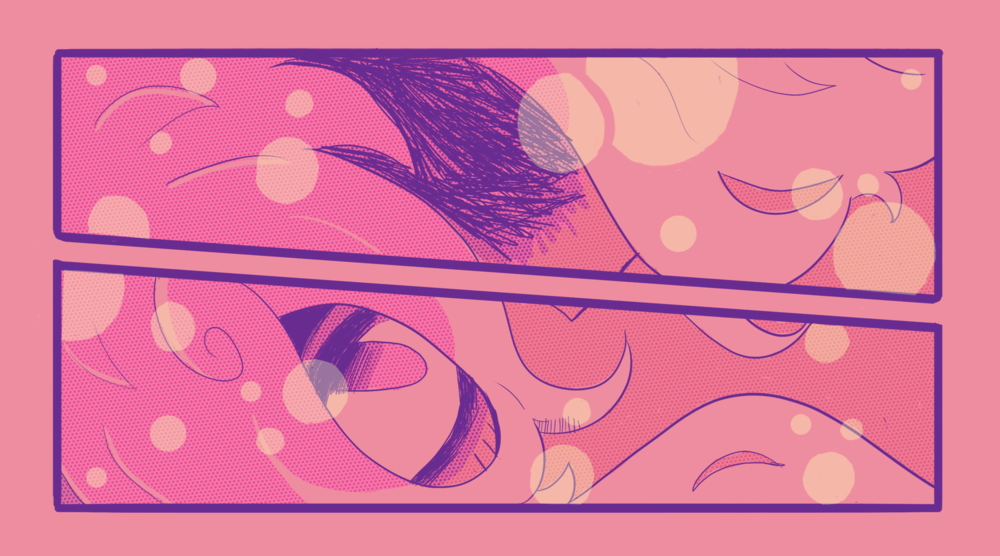 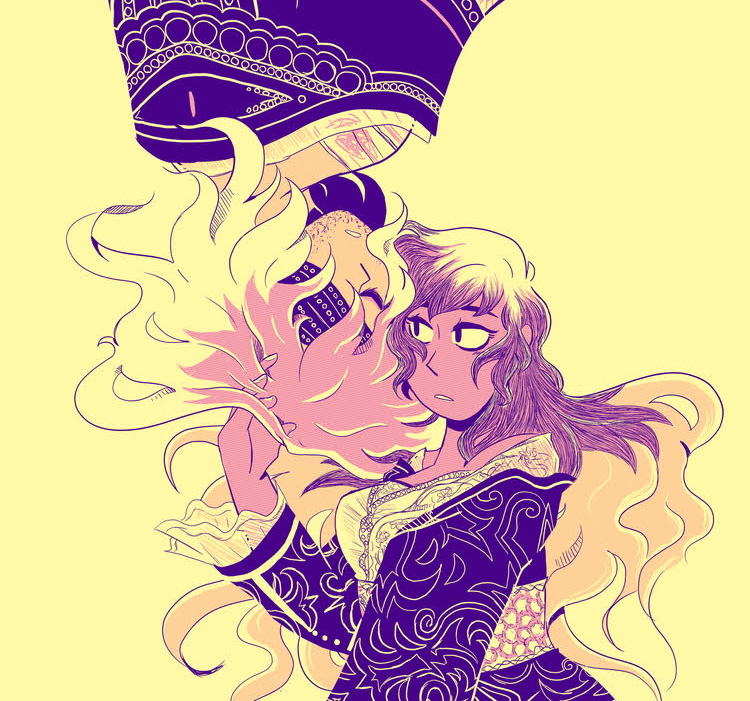 Mis(h)adra is fictional, but the back cover of the novel states that it is “based on the author’s own experience as an epileptic.” Author Iasmin Omar Ata’s depiction of Isaac’s struggle feels real, honest, and weighty. That, and Mis(h)adra stunning visual depiction of epilepsy itself makes Mis(h)adra essential reading.

Ata’s artistic style is strongly influenced by manga, with a cast of large-eyed characters, a focus on facial expressions, a looseness of panel sizing and borders, and a liberal use of halftone styling. At the same time, Ata flips the traditional, small-sized black and white manga format on its head. The physical edition of Mis(h)adra is a huge, 288 page hardcover, much closer in size to a magazine or western comic than any manga I’ve read. Ata’s psychedelic colors bleed into the page, with pages themselves often yellow, purple, or black instead of white. Characters are colorful and attractive, with strong senses of style and design. Ata, particularly in the novel’s more surreal sequences, flexes a beautiful mix of sequencing and illustration to create many evocative, powerful moments.

Mis(h)adra is a striking and vulnerable work. It may be a potentially triggering read, but it is a worthwhile one. Ata has published a hard and honest debut novel tackling epilepsy, isolation, and illness. I’m happy I read it, and am excited to see what they do next.

Harry Rabinowitz is a writer and editor focused on entertainment and technology. You can find him on Twitter, probably talking about table top games, @harryrabinowitz.