This feature is a reprint from Unwinnable Monthly #129. If you like what you see, grab the magazine for less than ten dollars, or subscribe and get all future magazines for half price. 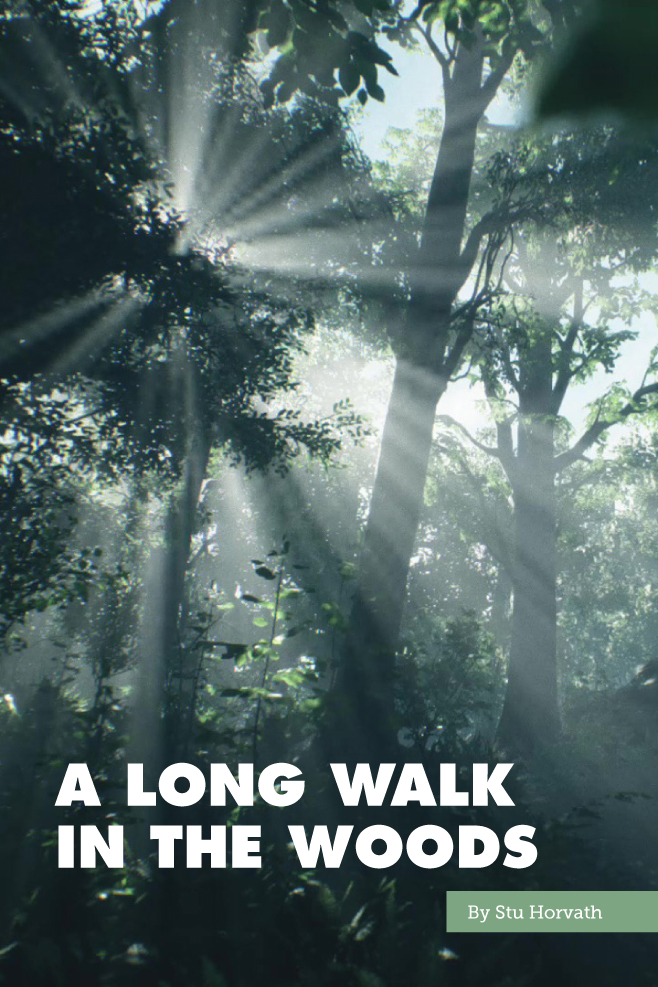 It begins with the sun bright in your face despite the leaves. In front of you is a knot of trails through dense trees and brush that leads, eventually, to a rocky ridge and, beyond that, gently rolling green fields of farmland. Behind you is a river lined by pebbled beaches. Rambling around, you may find a picnic table on a promontory, upon which a (rather nice) digital SLR camera sits. There is an overlook where you can catch a glimpse of distant mountains. There is a shallow cave where phosphorescent moss grows. You can hear the birds chirping, the leaves rustling, the river burbling.

There was a time, in the misty past, when walking was a matter of human survival, the prime way to hunt, gather and avoid others in the wilderness. Because we as a species evolved to walk – not fast, but deliberately and for long distances – it is curious that in the last century walking has come to be considered a leisure activity, an escape from the day to day prison of office chairs and stress and back pain.

This is perhaps one reason we don’t simulate walking much in videogames. Though a leisure activity, when we relax with a videogame, we generally relax through experiences defined by vicarious action and drama, charging pell-mell in to danger, guns blazing and sword flashing. Walking seems too . . . slow. Many videogame characters default to a slow trot as their default mode of traversal, engaged by fully pushing the joystick in the direction you wish to move. You hold a button while moving to run. To walk? Usually an uncomfortable, difficult to maintain, gentle quarter push on the joystick that winds up slipping into a trot the instant your mind wanders. The question my wife most often asks when she watches me play a game is, “Why are they running all the time?” The answer: because that’s how they were designed. 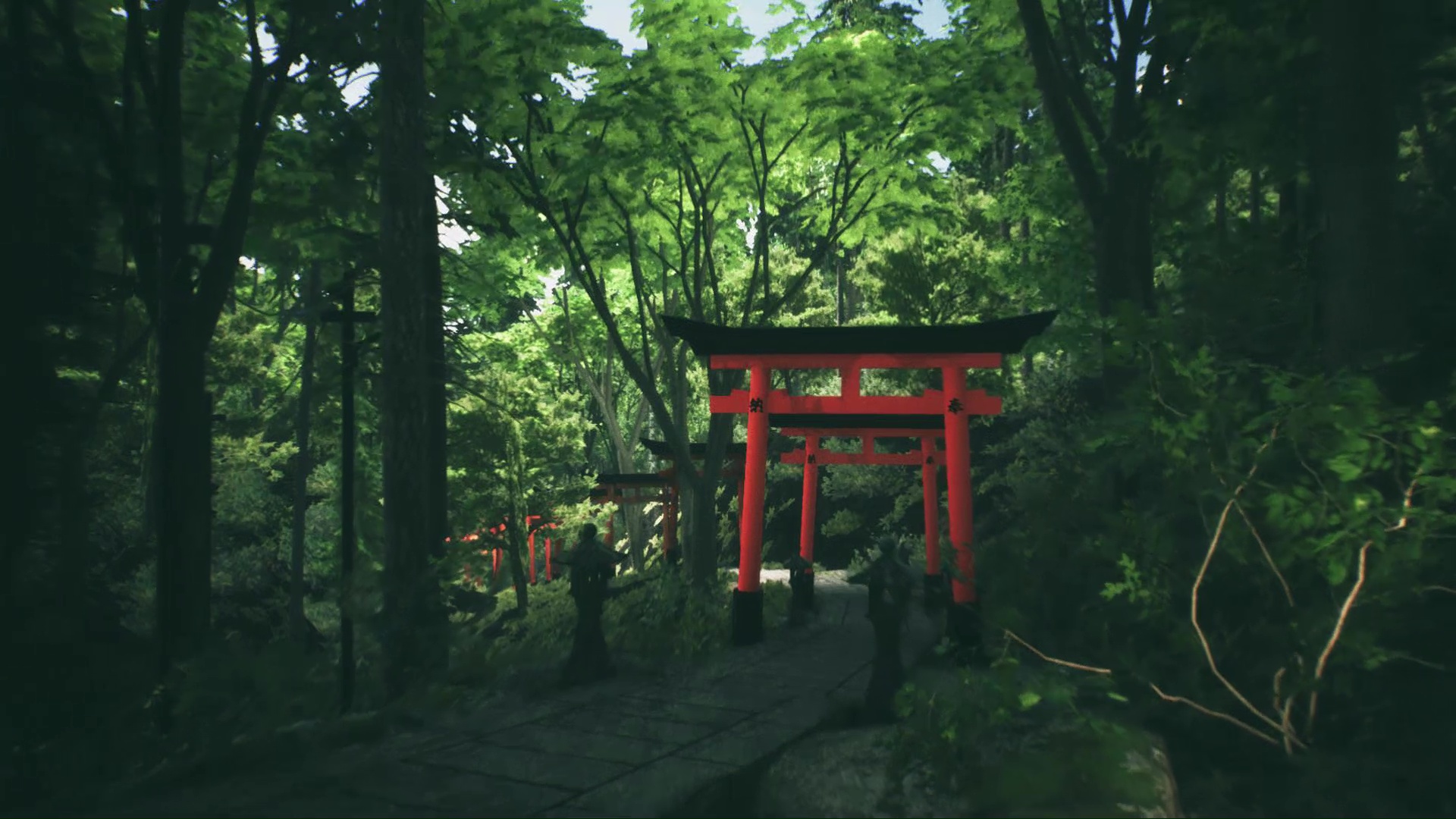 Even more contemplative games arranged around exploration default to a speed far above how a regular human rambles about. Journey delights in sliding and leaping. Firewatch, a game described by many as a literal walking simulator, in which you never encounter another character in person and in which it is impossible to die, has a sprint button. Videogames, perhaps because of their technical limitations, often focus on the grand totality of their simulated or narrative spaces rather than the details, so it is in the designers’ interest to send you along with celerity. For people who’ve been playing games for years and have accepted this swiftness into their muscle memory, merely walking in a videogame feels glacial.

Which brings me to Matt Newell, who has created a series of three short exploration games: Wakamarina Valley, NZ, which I described briefly at the start, Mýrdalssandur, Iceland, which presents a fog shrouded coastal region of moss, grasslands and river, and Explore Fushimi Inari, a renowned Shinto shrine in Japan. And when I say explore, I don’t mean in the Assassin’s Creed sense. As a player you move through these places as you would a person: sticking to the paths, taking in the sights and maybe, maybe, getting ankle deep in the water. “My aim,” he says, “was to create a relaxing experience that doesn’t force any objective and encourages the player to explore and discover things on their own. I’m a fan of . . . games that don’t necessarily rely on violence or hand-holding gameplay loops, and have a distinct focus on the environment and being immersed in the game’s world. I want people to leave my games feeling like they’ve been somewhere else, or to come back to them as a way to relax.” 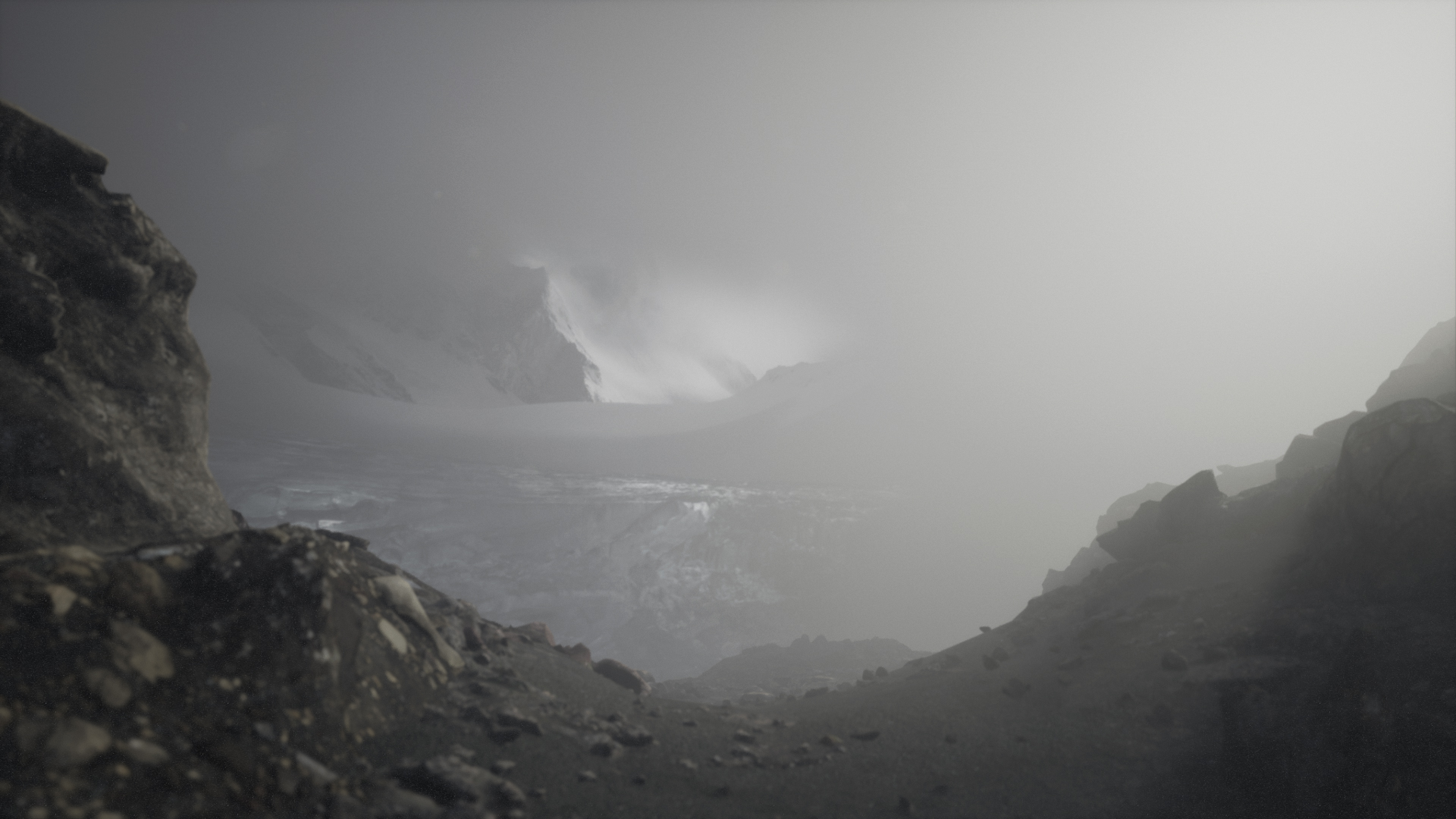 Newell is an engineering student and self-taught when it comes to game design. His initial experiments were creating environmental art so channeling his background in photography and his past solo travels into interactive environments was a natural next step. Each environment is the product of several years of tinkering with the aim of recreating the look and feel of a real world location.

“I began working on exploration/photography game mechanics because I wanted there to be an additional way for people to experience what I’ve made, and to take advantage of Unreal as a real-time engine,” says Newell.

At their core, photographs simply use chemicals or digital technology to record reflected light, but American film and camera maker Kodak changed that with their “Kodak Moments” advertising campaign. After that, it became impossible to divorce photography from the idea that, on some level, it was capturing memories. Thanks to his reliance on photography, this idea flows through Newell’s exploration experiences as well.

Wakamarina and Fushimi Inari left significant impressions on Newell when he visited them. When he set about creating his digital environments, he relied on his extensive photo archives as reference to ensure the game spaces were accurate, if not to the dimensions of the location, then to its spirit. 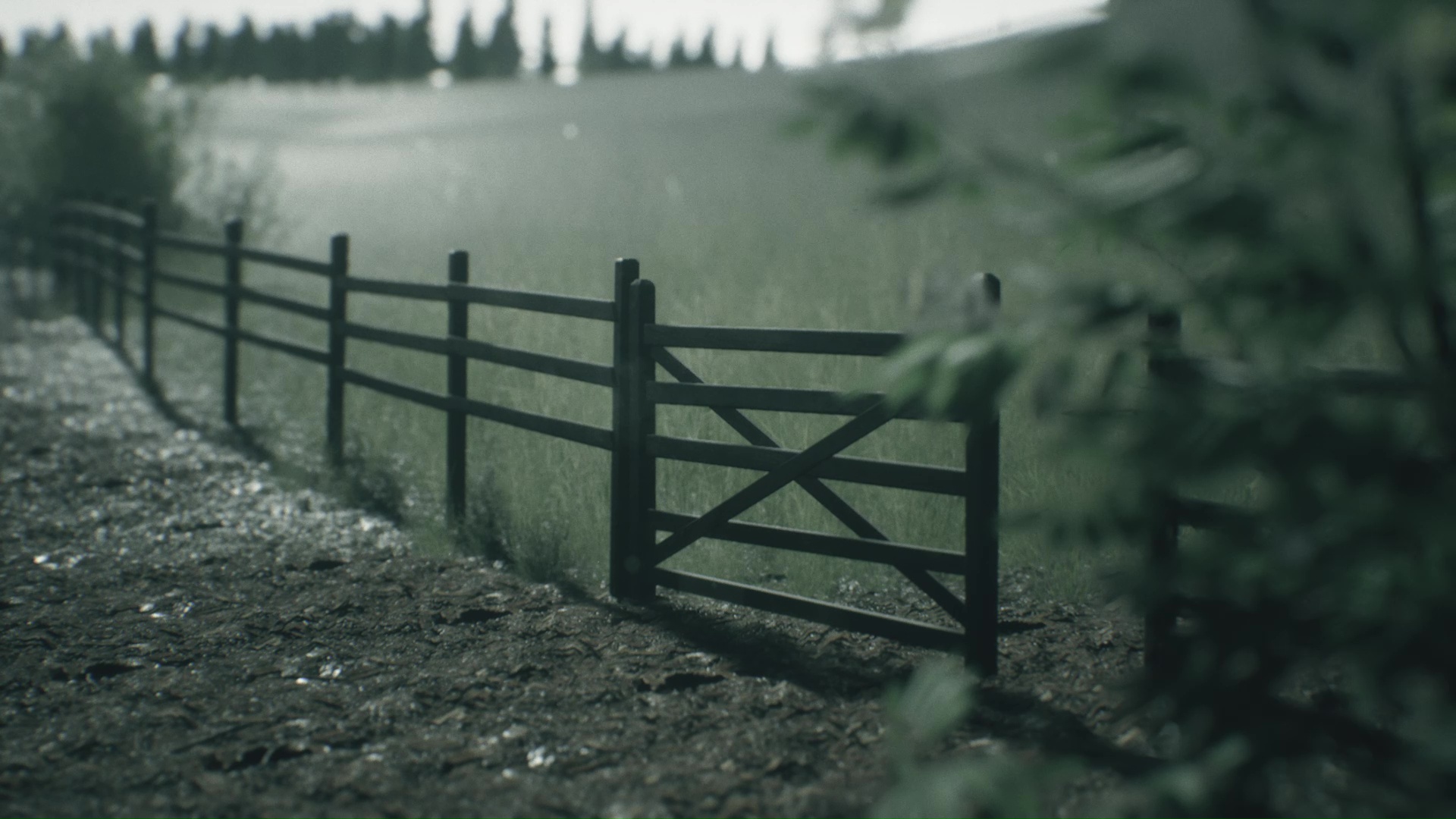 “While the actual space is somewhat accurate,” he says, “it’s more of a memory interpretation rather than a physical one-to-one recreation. Drawing influence from my memories means I can add some unique elements that represent the real experience, mostly in the form of music and colors.”

The inclusion of a photography mechanic in the games adds a meta sense to this. “Photos are a pretty important part of experiencing a place and remembering it,” says Newell. “That’s why I’ve tried to include it as a mechanic. It’s pretty reflective of how I like to explore real world places, although I also believe that putting the camera away for a while is also important when you’re walking around somewhere new.”

Or someplace never visited. Newell’s never been to Iceland. Mýrdalssandur was inspired by assets in the Quixel Megascans library and built referencing photos found on Google. Despite this, it still feels like a memory in the way Newell’s other projects do. Or a dream of a place.

Surprisingly, Newell doesn’t feel much kinship to other “walking simulators,” like Gone Home or Firewatch, despite their focus on immersive environments. Instead, he cites Inside and Journey as inspirations, “games that don’t necessarily use text/dialogue to sell an atmosphere or convey a story.” 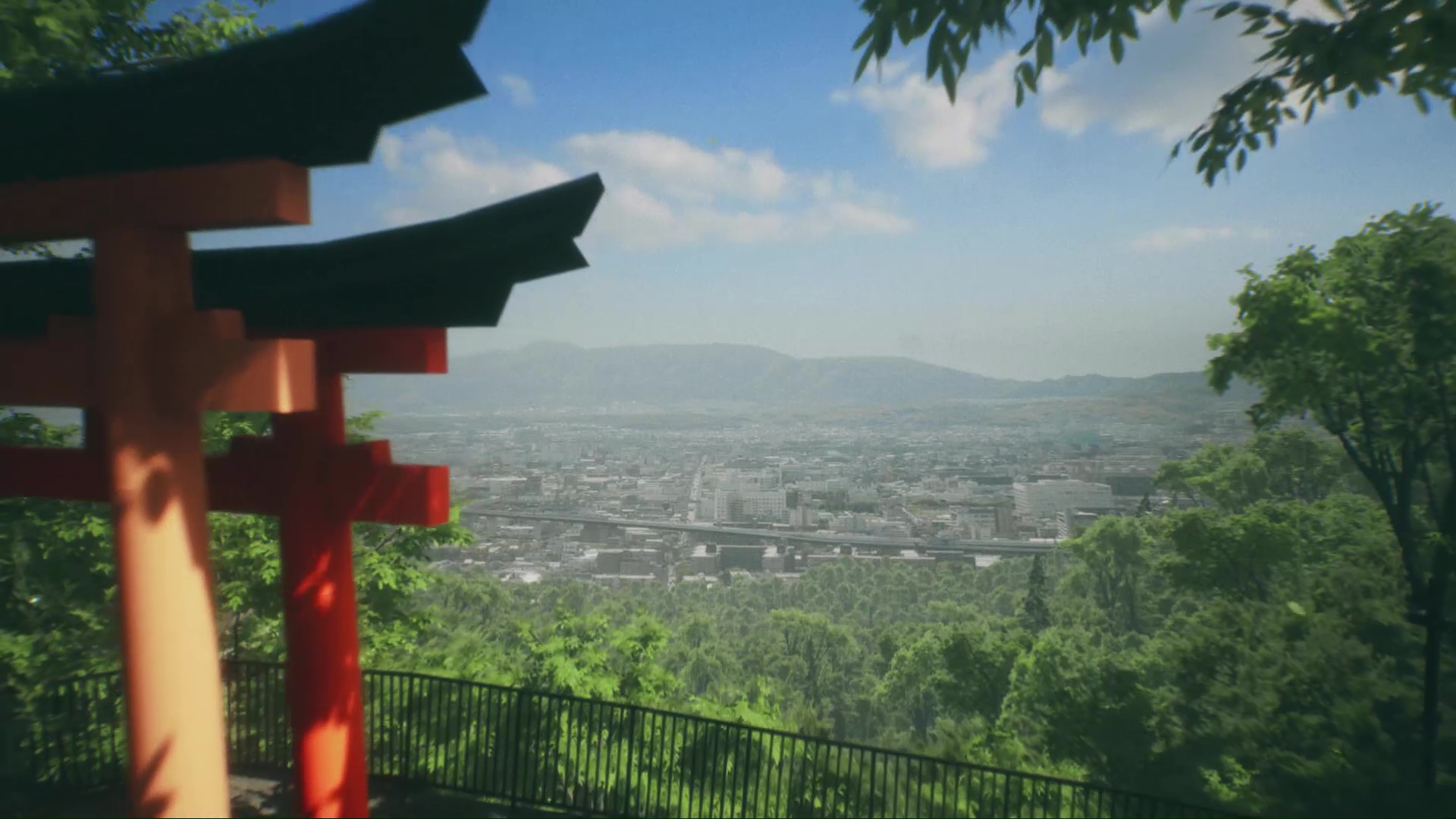 Whatever his inspirations, the experiences themselves have been well received. “The support on these projects has been pretty overwhelming, so at the moment all I want to do is explore new ideas and make games set in new locations,” he says. “I haven’t considered any narrative because I don’t really see it being used in my games, but I have thought about additional mechanics, I’m just going to work hard on movement/camera mechanics (in both desktop and VR) first until they’re fully fleshed out. Some contextual modes of transportation could be cool (eg. boats, bikes, cars), too.

I must confess: Newell’s exploration games include a run button. However, the way walking feels impossibly slow in a regular videogame, here in these vignettes of New Zealand, Iceland and Japan, running seems frenzied and out of place, erasing the sights and sounds you’re meant to be taking in. The run button feels as much of a concession to necessity as a walk button does in an Assassin’s Creed game. There is a gravity in these spaces that makes you want to take it slow.

Newell, it probably goes without saying, is fond of hiking. “It’s just a way to see the best sights wherever you happen to be,” he says. “I enjoy finding solitude on my long walks.”

All three of Matt Newell’s environments are available on itch.io. You can see more of them on his YouTube channel and check out his photography on Instagram.