A decade ago I used to write a lot about iOS games. Like a lot a lot. At one point I stumbled onto something that looked kinda goofy, had a (comparably at the time) hefty price tag, but also had a ton of glowing user reviews. So I decided to check it out and Mission Europa immediately became my favorite mobile game ever. To this day. But here’s the thing: as much as I enjoyed the game for all of its quirks and triumphs, it’s nothing but a memory now thanks to tech companies failing to properly account for legacy software support.

The basic idea, from what I can remember after almost nine years, is that your character has crash-landed on Jupiter’s moon while on the way to investigate why a previously established research base suddenly went completely silent. Of course, things get bad very quickly as you start to encounter bizarre cybernetic monsters that may or may not be partially built out of body parts from the base’s former inhabitants. It’s all got kind of a System Shock or Virus feel to it, which you’d think wouldn’t work with the blocky and colorful visuals but it sorta did. Plus the sound design helped too, with lots of distant screams and screeching along with the awful noises made by most of the hostile monstrosities that stalk the halls. 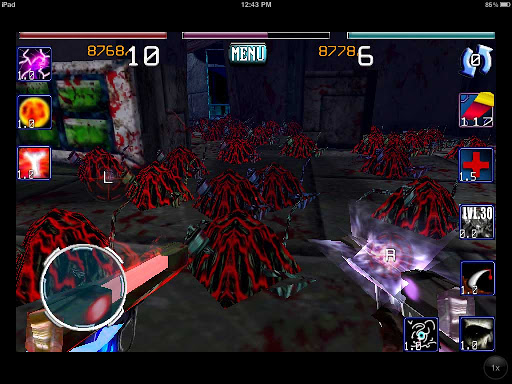 More than the theme and atmosphere, I really enjoyed simply playing the game. It was sort of like a first-person shooter mash-up of something like Borderlands with its special character abilities and semi-randomized gear drops, and a dungeon-crawling loot fest like Diablo. It was a little rough around the edges, sure, but it played well enough with touch controls and it struck this great balance between making me want to delve deeper in order to get better loot/level up my character, and making me want to stay closer to the surface where things were safer and a lot less horrific.

Then one day I upgraded my phone and discovered that I was no longer able to re-download Mission Europa from my App Store Library. It had been pulled from the store, most likely because one person having to constantly update and troubleshoot a new build for every new iteration of the operating system was an extremely unreasonable ask. And because I’m not too consistent with storing my phone apps locally (there are unofficial ways to do it that I was just too lazy to keep up with, honestly) I’m simply out of luck. No more game for me.

This wasn’t the first iOS game to disappear because Apple constantly forces a new OS on their users, and it wasn’t the last either, but this is the one that hit me the hardest because despite all the jank and the goofy visuals I still absolutely adored it. And I know this OS issue has affected way more important things than games, but jeeze, it sucks and I hate it.

Mission Europa’s creator, Ryan Mitchell, has been plugging away at a sequel for quite a while (I think maybe since around 2012/2013?), and even recently updated his development blog so I still have hope that I may be able to get back to that hideous, lovely universe at some point. And I wish him all the best on the project, however long it might take to finish. It just sucks that because Apple can’t be bothered to account for older software I’m forced to twiddle my thumbs for who knows how long to get my next fix.

A Long Walk in the Woods