This feature is a reprint from Unwinnable Monthly #107. If you like what you see, grab the magazine for less than ten dollars, or subscribe and get all future magazines for half price.

There’s a preconceived notion about videogames, especially from folks who don’t play them, that conflict, usually of the violent kind, is integral to the experience. But while a good shoot-‘em-up can certainly be cathartic, videogames excel at helping players unwind in a variety of different ways. Have you ever lost yourself in the abstract systems of a puzzle game? Or looked forward to a half hour of tending your digital garden in a game like Stardew Valley?

Skye, developed by Puny Astronaut, offers relaxation through exploration. The game offers what managing director Cian Roche calls, “a visit to a world that couldn’t be happier to see you.” Players control a friendly dragon that doesn’t fly so much as swim smoothly through the sky, brushing through a welcoming environment of playful discovery. Playing Skye is almost like entering a meditative state. There is no violence, no failure and no quests nagging you.

Puny Astronaut is an eight-person team, seven of which met in Abertay University’s game development program. Skye was born in 2016 – while they were in their third year – as a prototype developed in eight weeks and submitted to the Dare to Be Digital completion. The response, and funding, that followed suit meant they could continue developing it into a full-fledged game.

Cian Roche was kind enough to chat with us about the joy of relaxing games, designing dragons and more. 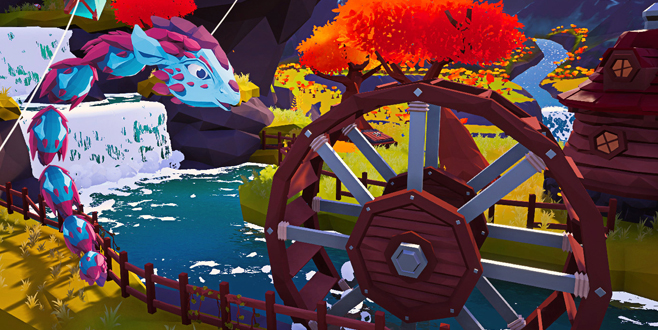 What inspired Skye? What’s the meaning behind the name?

I remember being mentally drained at the time I started thinking about the first concept, which was then called Glaze. Uni work was piling up and I felt like I had so few games to turn to which weren’t loud, violent or otherwise trying to stress me out in any number of different ways. The original intention was to create something soothing; where the player would want to get lost and forget about everything outside of the game. It went from being very abstract – set in a world of stained glass – into a more terrestrial and familiar setting. The current name of the game is from the Isle of Skye here in Scotland. Skye is a beautiful, serene part of the world. I thought it suited the atmosphere we were trying to create.

Being soothing isn’t something videogames are generally known for. How do you work against that preconception with Skye?

Yeah I definitely think people who don’t play games have very narrow assumptions about what games are and what they can achieve. I feel that so many games have traditionally been designed to be a fight; the game fights the player and the player fights the game. It’s an easy way to create a sense of satisfaction, but it’s put so many people off exploring the medium because they don’t want to be criticized or punished for essentially not passing a test. We would hear, “Oh I’m terrible at these things,” so often from people that didn’t play games when we offered them a controller. It was kind of heartbreaking! From the moment the player first starts playing Skye, we’re making sure it’s clear that the game makes no definition of failure. They can’t run out of time, get hurt, or get a bad score – it’s just happy that you stopped by. 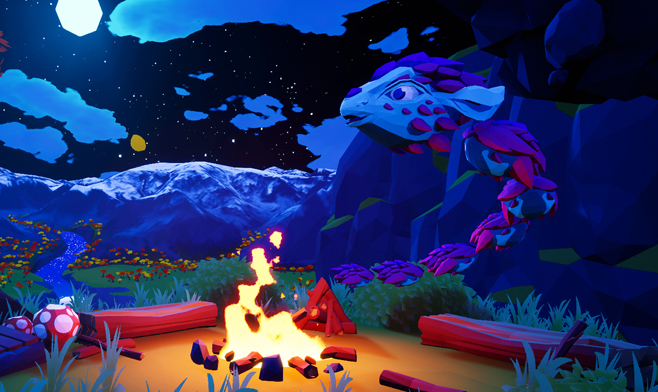 I have to admit, with the state of the news cycle these days, “a world that couldn’t be happier to see you” sounds extremely appealing. How do you go about creating a welcoming world like this?

We think so too! We’re making sure the player is rewarded whenever they poke and prod the world. Pinwheels spin and flutter as you breeze past them, the music becomes distant and dampened when you fly into a big glass bottle and animals dance when you sing to them.

We’re trying to be holistic in achieving that immediate sense of calm the player should feel. We looked at a lot of studies on color theory, fine-tuning the fluid 60 fps movement of the dragon and composing a soundscape that wraps you up in a peaceful ambience. It sounds obvious to say that it’s not only one thing that makes the experience appealing, but we’re really striving to make sure all aspects of the game are lined up in service of that goal. 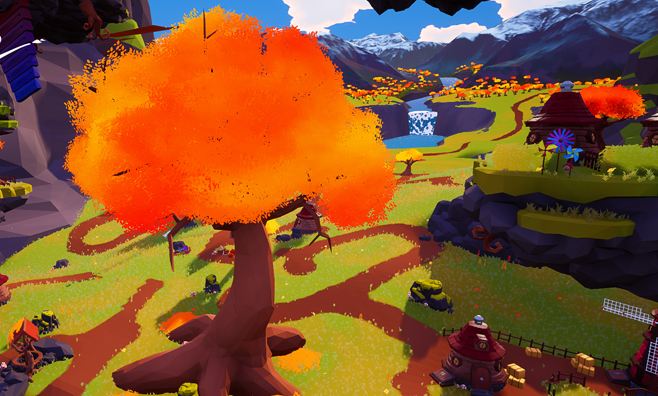 The dragon is obviously central to the game. It seems to take some design cues from Chinese dragons and I am intrigued by how it seems to swim through the air rather than fly. Can you talk about how you approached the design of the dragon and how you hope those decisions translate to the player’s experience?

The dragon has gone through so many redesigns to arrive at what they now look like. Since the first fluid version we made for Dare to Be Digital, we knew that we had found the perfect avatar for the player in the fantastic world we were building. Flow was very important to the experience, and no other version of a character would serve that idea quite as well. Skye almost never stops moving – even stop using the controller for a few moments, they will drift and twirl softly in the air. The game turns into a mesmerizing screensaver.

We spent a long time tweaking acceleration and deceleration, turning speed, the number of segments on the body, etc. Having the frame rate at 60 fps was hugely important to the immediate ‘sink-in’ feel. The visual design itself has gone through several versions as well. It started as an abstract crystalline creature, but we wanted it to be able to emote and look friendly. Some of the animals we looked at were hummingbirds, pangolins, Chinese dragons, goats and many more. We finally landed on a version that looks cute and familiar, but was still exotic and different. 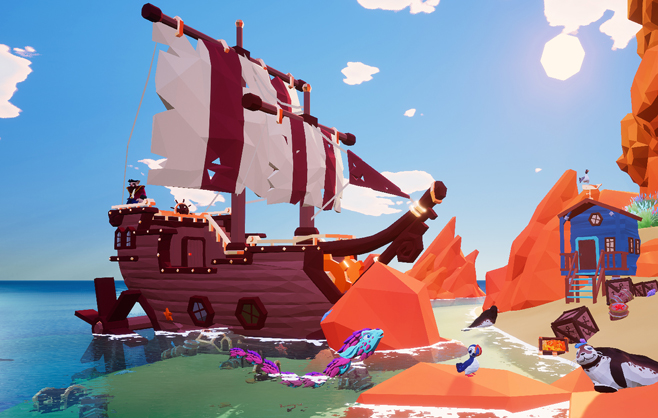 What do you hope players take away from Skye?

At the very least, a sense of cheery calm. Our favorite instances of people playing have been when someone who may have never played a game in their life is able to fly around and interact with the world, and feel like they had a rewarding time playing it. We’re working on the story and quests which add to the richness of the world, but even if the player chooses to ignore those, they’ll still be able to inhabit a comforting, welcoming space for as long as they’d like.

Unreal Engine made the most sense for our team by far. We always wanted the visuals to be striking and well-developed, and Unreal’s features were already there to help us reach that goal. It was also the best choice for the whole team to work with, being so well suited to a visual work-process with blueprints and the accessible editor.

The Dev Grant was hugely helpful to us when it came to rounding out our prototype last year. Without it, we would have had a more difficult time getting over those last few hurdles to where we are now with 4J. We count ourselves very lucky to be recipients and can’t wait to show off the results of their help and our hard work!

Revving the Engine: All Walls Must Fall