Take a while to explore the game world in Assassin’s Creed: Origins and you’ll see some pretty impressive sights. The best one in my personal opinion is just south of Letopolis. Three pyramids emerge from the dunes of the surrounding desert like mountains in a sea of sand. These are of course the pyramids of Khufu, Khafre and Menkaure. They’re in Giza.

These aren’t the only pyramids in the game world. You’ll come across a couple more of them if you keep heading south. Giza is definitely great. You’d be missing out on a lot if you stopped exploring in Giza, though. The pyramids of Djoser, Huni and Sneferu are in Saqqara. The pyramid of Amenemhat is just a little bit further south in Haueris. They’re pretty similar in appearance, but none of these pyramids are actually the same. They come in a variety of shapes. They have different subsidiary structures. What exactly is the reason for this lack of consistency? The answer is that each one of them represents a separate stage in the development of the pyramids.

I’m an archaeologist with a specialization in the architecture of ancient Egypt. Similar to most people who played the game, I was blown away by the buildings in Assassin’s Creed: Origins. They were easy for me to appreciate because I already knew all about them, though. The pyramids in particular. This puts me at a bit of an unfair advantage when it comes to exploring the game world, so I’d like to bring you up to speed by giving you an introduction to the development of the pyramids. I hope that you’ll come away from our discussion with a better appreciation for these wonders of the ancient world. Without any further ado, let’s talk about some pyramid schemes. 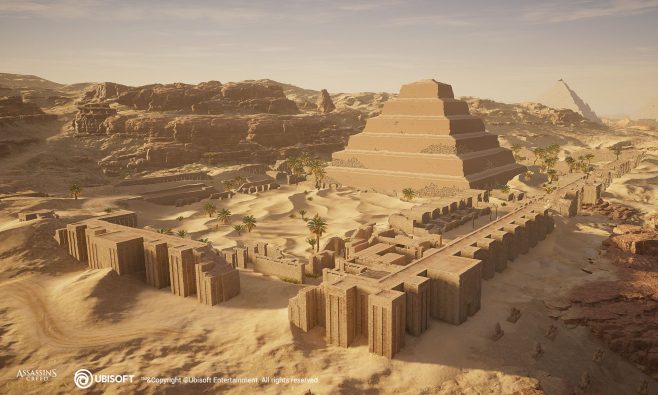 You can trace the origins of the pyramids back to the Early Dynastic Period. This was the point in time when the ancient Egyptians began making structures with sloping walls and flat roofs known as mastabas. These tended to be made with mudbrick. The size of these structures varied, but the average was about 80 feet in length by 40 feet in width and 20 feet in height. People entered mastabas through a door on the longest side of the structure which led them to a room where they could worship or leave presents before a statue of the deceased. The statue was almost always placed inside a particular type of chamber with a window called a serdab. There was a vertical shaft behind the serdab which ran about 30 feet into the bedrock below the mastaba. This was of course connected to the burial chamber where the body of the deceased was preserved. Walk around the game world in Assassin’s Creed: Origins for long enough and you’ll come across quite a few mastabas, but you’ll find a whole bunch of these buildings in Giza. While most of them are in poor condition, they still provide a pretty good idea of what a mastaba looks like.

The second stage in the development of the pyramids came in the Old Kingdom. The idea was basically to make a really big building by stacking a series of mastabas on top of each other. Since the mastabas decreased in size towards the top, this type of structure became known as a step pyramid. The first one was built by Djoser. He made a couple more changes to the mastaba than just adding some stories, though. The burial chamber was left in the bedrock below the structure and the core was still made with mudbrick. The shell on the other hand was made from stone. The room where people could worship or leave presents in front of a statue of the deceased was also turned into a separate structure. This came to be called a mortuary temple. Turning this room into a separate structure presented some problems of security, so Djoser surrounded everything with a series of walls and towers. In this way, he created the first pyramid compound. You can see a reconstruction of this pyramid compound in Assassin’s Creed: Origins if you head over to Saqqara. You’ll find a step pyramid and a mortuary temple that are surrounded by a series of walls and towers.

Pyramid compounds remained pretty much the same during the third stage of development. There was always a mortuary temple. There were always walls and towers. The pyramids didn’t remain the same, though. There were four significant changes. The first was that pyramids came to be completely made from stone. The second was that burial chambers were built into the core. The third was that pyramids were given a shell that was shaped into a flat surface. In other words, they became what are known as true pyramids. The fourth was that pyramids were built at steeper angles. While the pyramid of Djoser was angled at 49 degrees, the pyramid of Huni for example was angled at 51 degrees. This actually caused the shell to slide off. The pyramid of Sneferu was even angled at 54 degrees. While the shell didn’t slide off, the structure became unstable during construction, so the angle was changed to 43 degrees. This would explain why the building is often referred to as the Bent Pyramid. Similar to the pyramid of Djoser, you can see reconstructions of these two structures in Assassin’s Creed: Origins. Both of them are in Saqqara. You should really check out these bizarre buildings. 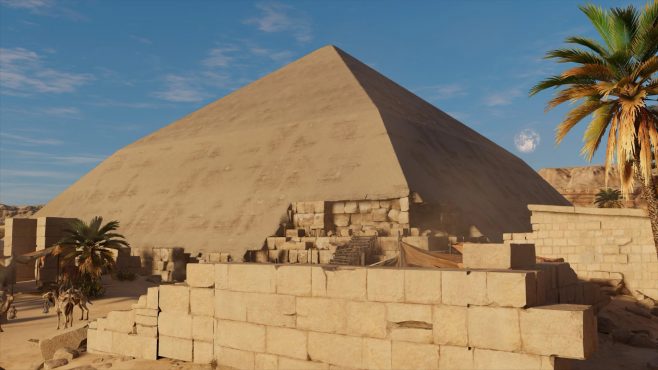 The fourth stage in the development of the pyramids was mostly a matter of standardization. Pyramids were always angled at about 50 degrees. Pyramid compounds no longer had towers, but they always had walls. They always had a mortuary temple, too. The most significant change was the addition of a structure next to the Nile River that was connected to the mortuary temple by a covered causeway. This became known as a valley temple. The purpose of these remains mysterious, but they seem to have been used for some sort of ceremony related to the practice of mummification. The body of the deceased was taken down the Nile River to the valley temple where it was mummified. The body of the deceased was then brought up the covered causeway to the mortuary temple. The pyramids of Khufu, Khafre and Menkaure provide a good example of how this worked. You can see for yourself in Assassin’s Creed: Origins if you spend some time in Giza. You’ll come across the famous pyramids of Khufu, Khafre and Menkaure in this part of the game world, but you’ll find a bunch of mortuary and valley temples that are connected by covered causeways, too.

The last pyramids were built in the Middle Kingdom. When it comes to shape, they were still being angled at about 50 degrees. In terms of subsidiary structures, they still had mortuary and valley temples that were connected to each other by a covered causeway. There were two significant changes, though. The first was that mortuary temples changed in size. These buildings were made much bigger than ever before. Amenemhat for example made a mortuary temple so massive that it seems to have inspired the myth about the minotaur and labyrinth. You can actually see a reconstruction of this mortuary temple in Assassin’s Creed: Origins if you take some time to explore Haueris. The structure definitely looks like the sort of place where you might come across a minotaur. The second was that cores went back to being made using mudbrick. Since the shells were taken off over time, the result was that most of these pyramids were reduced to piles of rubble. The pyramid of Amenemhat is a really good example. The structure is basically just one more dune in the desert at this point. You can see what it looked like on the other hand in Assassin’s Creed: Origins. You can even climb all over it. 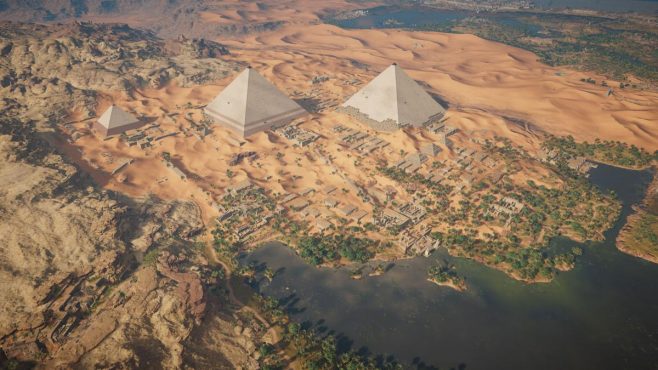 You might be wondering what happened to the pyramids. The answer is that people quite simply stopped making them. What exactly did the ancient Egyptians replace them with? Tombs.

In terms of both time and resources, pyramids were incredibly costly to construct. These buildings were significant investments. This caused the ancient Egyptians to look for some other solution to the problem of burying the bodies of their deceased, so they started making tombs rather than pyramids in the New Kingdom. These were mostly placed in the Valley of the Kings. You’ll come across quite a few tombs in Assassin’s Creed: Origins, but the Valley of the Kings doesn’t happen to be in the game world, so there’s only so much that you can learn about these tombs. Supposing that you’re interested in learning more about the Valley of the Kings, this means that you’ll just have to pick up some books. The best one in my personal opinion is The Complete Valley of the Kings by Nicholas Reeves and Richard Wilkinson. This will teach you pretty much everything that you ever wanted to know about them.