Take some time to explore the game world in Sekiro and you’ll get blown away by its buildings. When it comes to traditional architecture in Japan, the game has basically everything that you could possibly want. Palaces in the shinden style. Castles in the sukiya style. Buddhist temples. Shinto shrines. You’ll come across all of this and quite a bit more in the game.

The attention for detail in Sekiro is pretty much impeccable. The roof tiles known as shibi, for example, are featured in the game. These take the form of a smiling shachihoko in some places, but appear as a scowling onigawara in others. (The former is a fish with the head of a tiger and the latter depicts a kind of demon). The ropes called shimenawa show up in Sekiro, too. Since you’re able to climb all over the structures in most parts of the game world, you can even appreciate these exquisite details up close. Try it out. You won’t be disappointed.

The game world in Sekiro provides a perfect opportunity to talk about traditional architecture in Japan. Starting with style and then discussing details, let’s take a look at some of the structures in Sekiro. Who knows? You might just learn a thing or two. 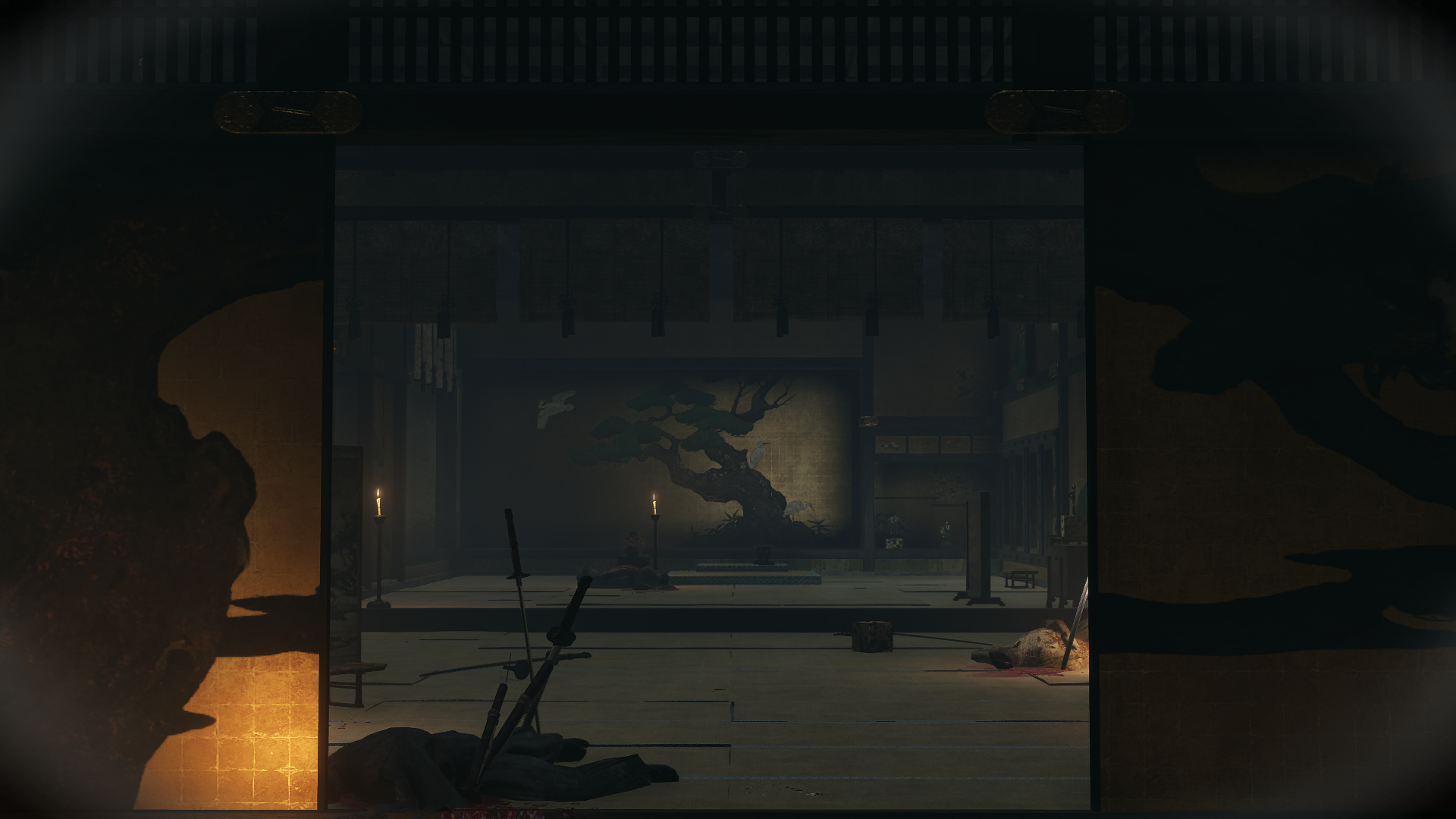 The style of architecture known as shinden was the first to be developed in Japan. Since it was a product of the Heian period, the shinden style was definitely influenced by structures dating to the Jomon, Yayoi and Kofun periods, but these would best be described as having belonged to various types of vernacular architecture. (The structures dating to the Asuka and Nara periods were mostly influenced by traditional architecture in China). The shinden style is characterized by a series of rooms that are symmetrically arranged around an open courtyard with a garden. The main room on the north side is flanked by two others called tainoya that extend to the east and west. These are attached to another two called tsuridono that extend to the south. The main room consists of a core and periphery known as a moya and hisashi that are separated from each other by paper screens called fusuma. With its tainoya and tsuridono that surround an open courtyard with a garden, the Hirata Estate in Sekiro provides a perfect example of the shinden style. Step into the main room and you’ll even see a moya and hisashi that are separated by fusuma. 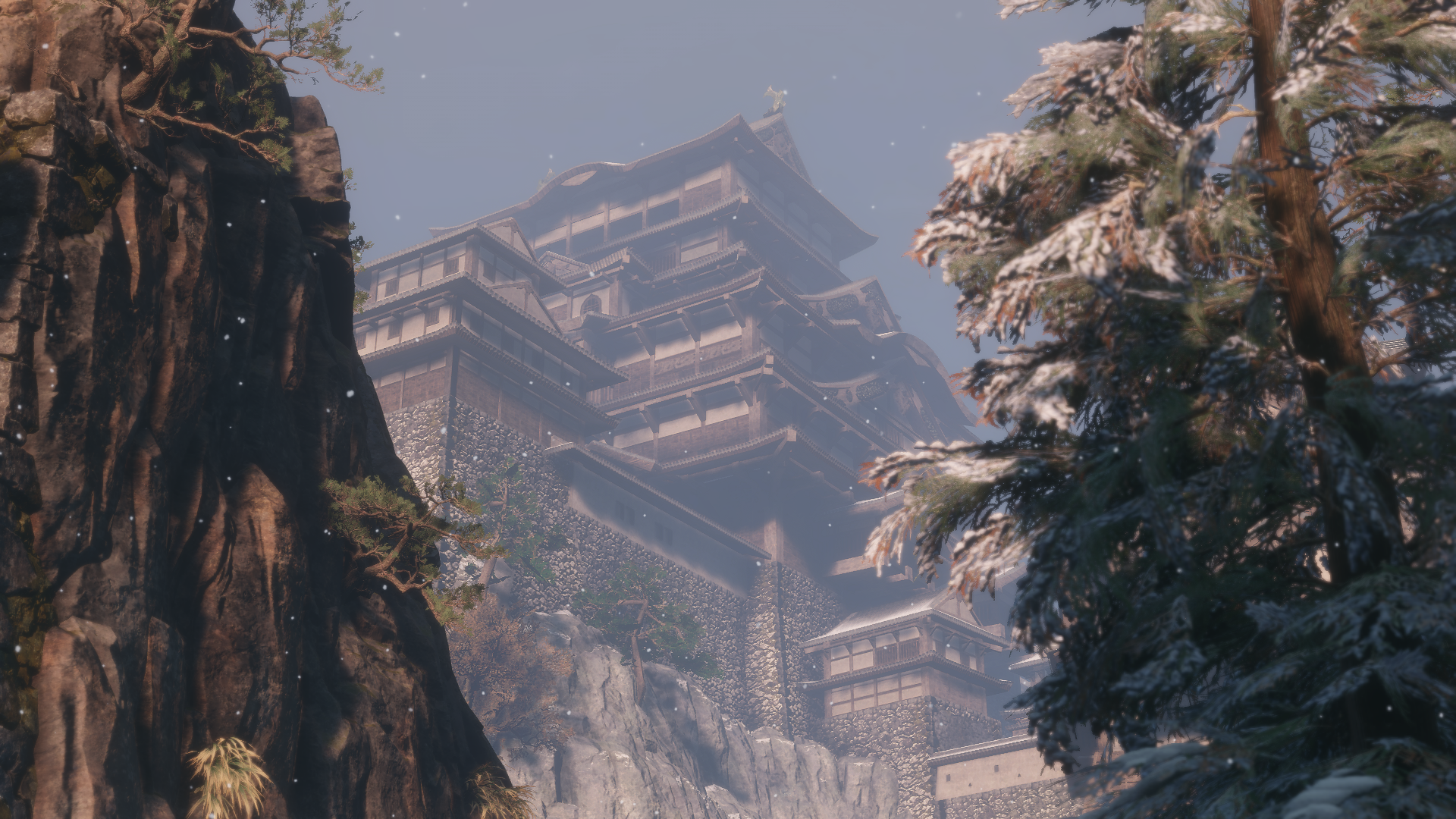 The sukiya style is the most typical type of traditional architecture in Japan. The style remains popular even today, but it was developed in the Edo period. The sukiya style is primarily characterized by ornamental simplicity. Structures in this particular style of architecture tend to be accessed by a stone pathway that meanders up to the entrance through a garden, too. You can see these features of the sukiya style in Sekiro if you take a look at Ashina Castle. The structure has plaster walls and a tile roof that are mostly without ornamentation. The building also has a garden behind it. You can spot these from a distance, but several features of the sukiya style can only be seen from the inside. Walk around Ashina Castle for a while and you’ll notice that most of the rooms are entered through a type of sliding door known as a shoji. Several of them also have an alcove called a tokonoma. These are flanked by desks and shelves named shoin and tana. The exposed roof beams known as ranma give it away, though. You can always recognize a structure in the sukiya style by its exposed roof beams.

The structures in Sekiro aren’t all about style. They have plenty of substance, too. This takes the form of exquisite details like shibi and shimenawa. 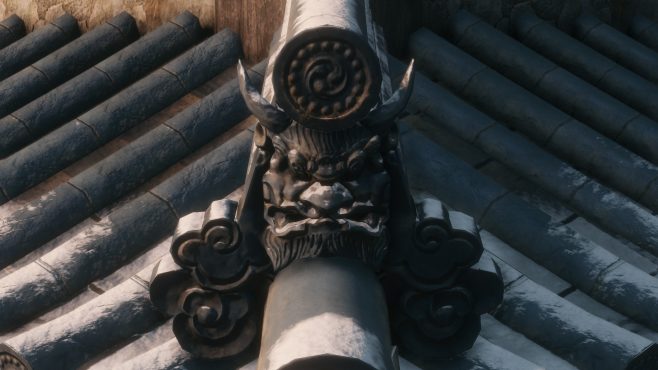 Stare at any Buddhist temple in Japan for long enough and you’ll spot a shibi on the roof. These can be seen resting on the main and descending ridges known as omune and kudarimune. While they often depict a shachihoko, they can frequently be found in the form of an onigawara, too. These two particular types of shibi were first developed in the Heian period as part of the shinden style. Since the point was to prevent leaks during the rainy season called the tsuyu, they clearly had a practical purpose, but shibi were also appreciated for their supernatural powers of protection. People believed that shachihoko could prevent fires from breaking out. (Similar to most other structures in the Heian period, Buddhist temples were made from wood, so fires were a constant problem). They also believed that onigawara could scare away the spirits called yokai. You can spot a few in the shape of a shachihoko, but most of the shibi that you’ll see around Senpou Temple in Sekiro are definitely onigawara. These are easy to find because they’re pretty much all over the place. The main hall known as the hondo is covered in them. I counted several dozen. 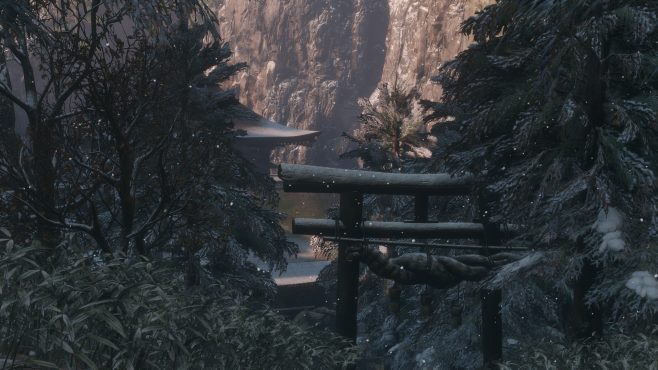 Shinto shrines are famous for their shimenawa. These are typically hung from a ranma, but you’ll often see shimenawa tied to a type of gate known as a torii, too. They can also be found attached to a rock or tree that is called a yorishiro when it comes into contact with a yokai. They sometimes have pieces of paper named shide hanging from them. While nobody can say for sure when they were first developed, people seem to have been practicing a form of Shinto in the Jomon period, so shimenawa probably first appeared at some point in either the Yayoi or Kofun period. The purpose of them was to protect Shinto shrines from yokai. They can be found all over the place in Sekiro, but the Great Serpent Shrine definitely has the best examples of shimenawa. You can find one tied to a torii in front of the worship hall known as the haiden. Walk up to the entrance and you’ll come across another one hanging from a ranma. Step into the structure and you’ll see a shimenawa wrapped around a subordinate shrine called a setsumatsusha that is just behind the haiden. This one even has a couple of shide hanging from it. 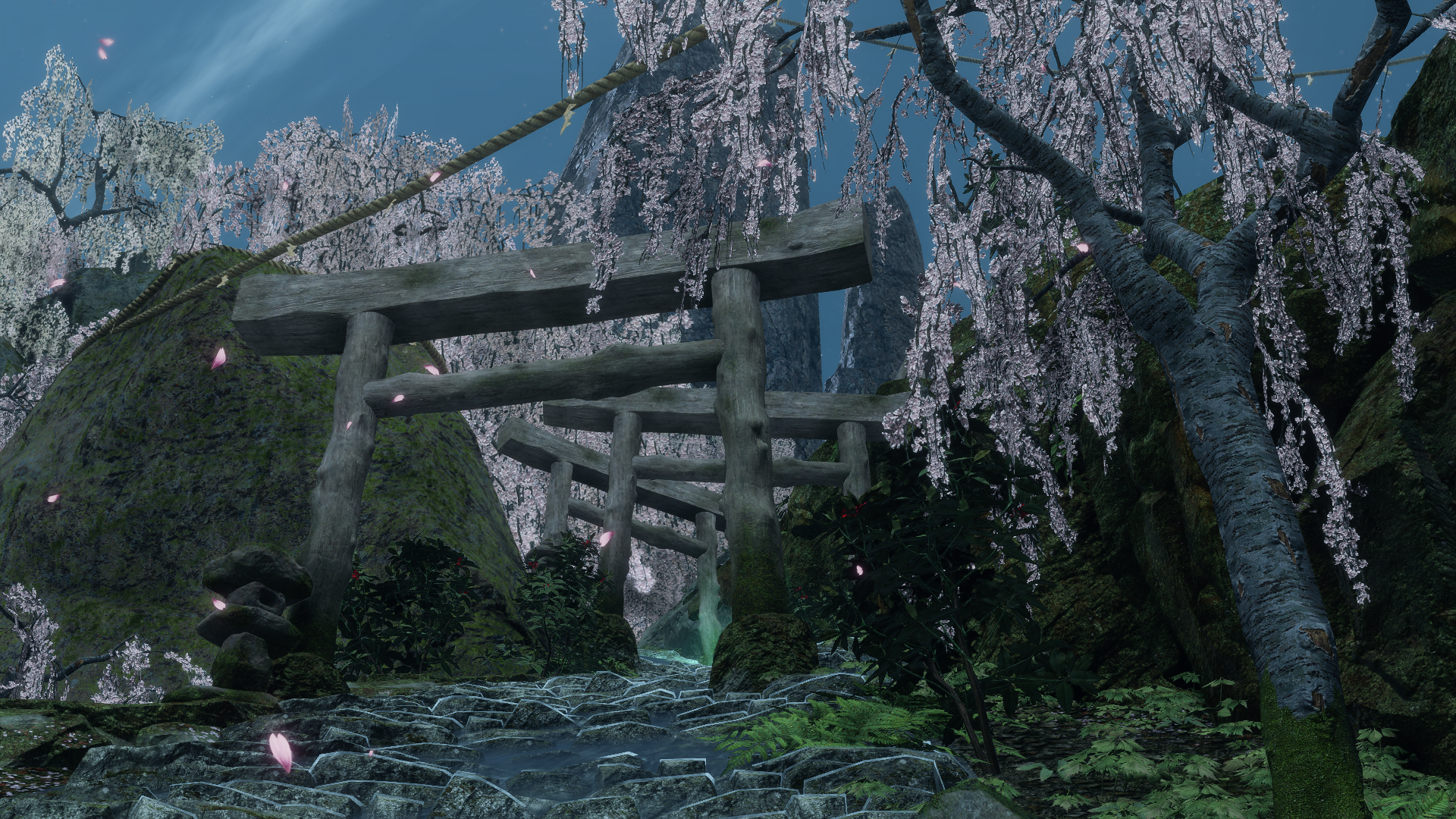 The game world in Sekiro is a celebration of traditional architecture in Japan. Take some time to explore the place and you’ll see buildings in the shinden and sukiya styles, but you’ll come across all kinds of exquisite details like shibi and shimenawa, too. The best part is that you don’t have to appreciate any of these things from a distance. They can be seen up close. You can walk around the tainoya and tsuridono in the Hirata Estate. You can also take a look at the tokonoma in Ashina Castle. Similar to the hondo in Senpou Temple, you can climb all over the haiden in the Great Serpent Shrine. 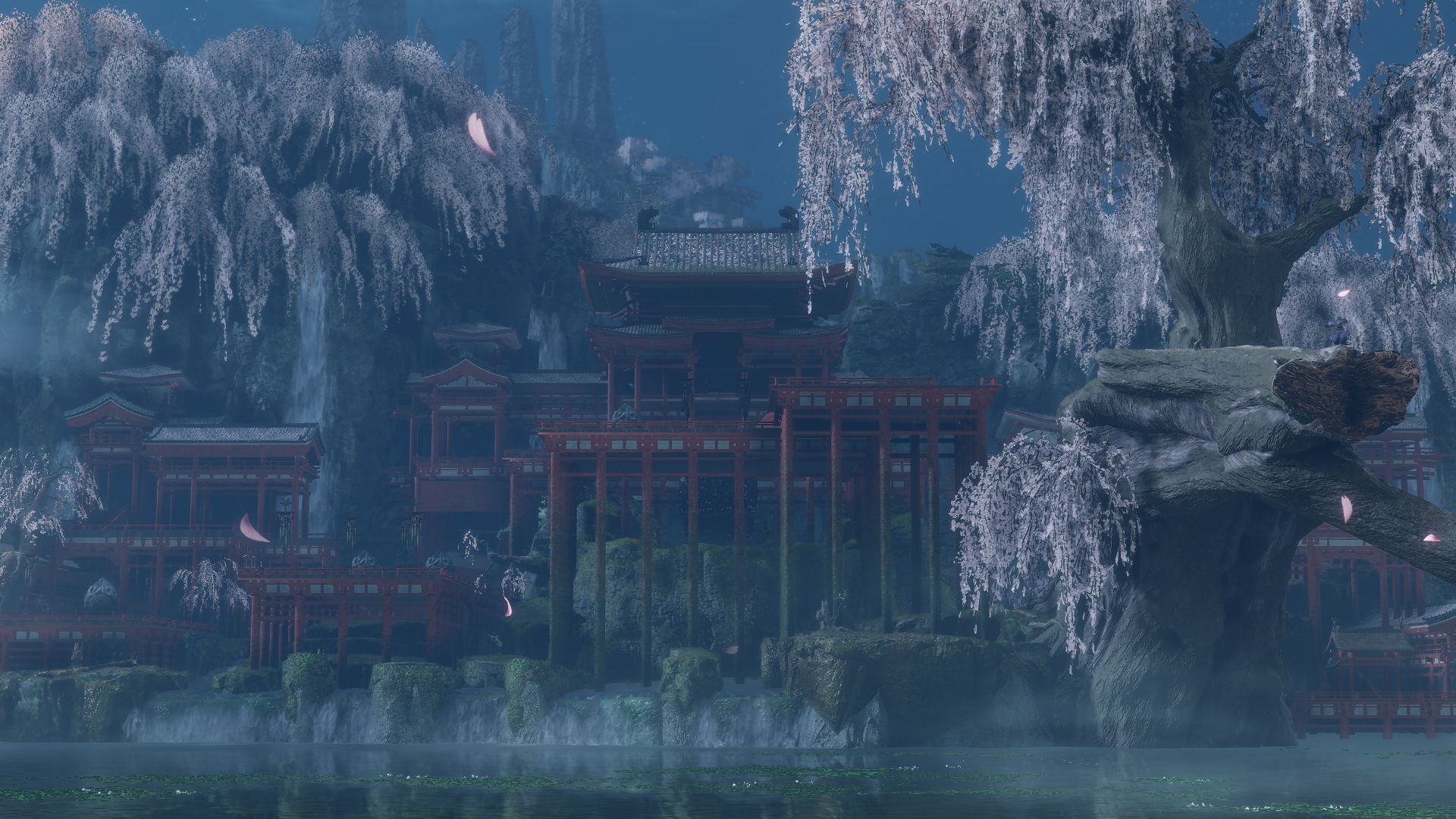 The structures in Sekiro were clearly created by people with a passion for traditional architecture. I definitely share this passion. You probably feel the same way. While quite a few games have been set in Japan over the years, there have only been a couple that have buildings like the Hirata Estate, Ashina Castle, Senpou Temple and the Great Serpent Shrine. These provide a perfect opportunity to talk about the shinden and sukiya styles or things like shibi and shimenawa. I hope that we’ll get a few more games like Sekiro in the future so that we can keep our discussion going.

The Silent Rot of Sekiro