You shouldn’t be too surprised at this point to learn that I loved Assassin’s Creed: Origins. I must have spent months exploring every corner of the game world. We don’t know everything about it, so the developer behind Assassin’s Creed: Origins, Ubisoft, had to fill in some blanks when it reconstructed the place, but the game still provides a pretty good picture of ancient Egypt. The architecture in particular is worth pointing out. Ubisoft clearly based its reconstruction on reliable sources of archaeological evidence. I was blown away to see that most of the buildings in the game world reflect the findings of recent fieldwork. Some of them even seemed like they could be used in a book about the architecture of ancient Egypt.

When I played Assassin’s Creed: Origins, I couldn’t stop thinking about how wonderful it would be to put the game to some kind of educational use. Ubisoft apparently had the same thought. The developer made an educational mode for Assassin’s Creed: Origins known as the Discovery Tour about a year after releasing the main game. Since most of the information pertains to the Hellenistic Period, I found the Discovery Tour to be just a little bit of a letdown, though. The main game takes place at this time, so I can see why Ubisoft made the educational mode this way, but I still wanted there to be more information in the Discovery Tour about the Pharaonic Period. I’ll try to make up for this minor shortcoming by using Assassin’s Creed: Origins to give you an introduction to the architecture of the pharaohs. I hope that you’ll find it interesting. Let’s get started.

I can’t possibly talk about every sort of structure, so I’ll just focus on pyramids, temples and fortresses. You should probably know about these if you’re interested in the architecture of ancient Egypt. There are some wonderful examples of them in Assassin’s Creed: Origins, too. 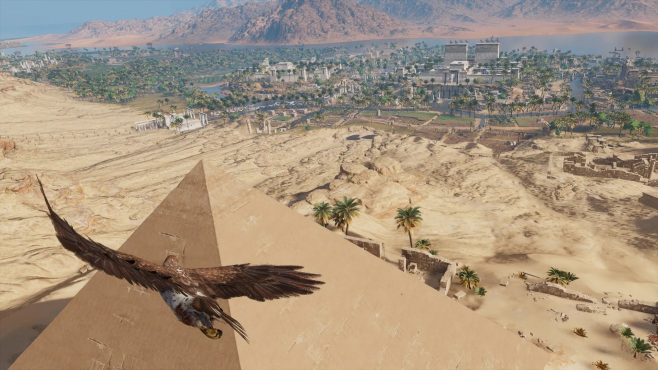 Pyramids were situated inside walled compounds that also had buildings known as mortuary and valley temples. (There were often subsidiary pyramids and a similar sort of structure called a mastaba within these compounds). The former stood at the base of the pyramid. The latter stood next to the Nile River. These were connected by a covered causeway that was about half a mile in length. While the mortuary temple was meant for making offerings, we aren’t quite sure what purpose the valley temple served, but the structure seems to have been used for some sort of ceremony related to the practice of mummification. The relative size of these buildings fluctuated over time as a function of their perceived importance. Khufu made a massive pyramid in Giza during the Old Kingdom. Amenemhat, on the other hand, made a massive mortuary temple in Hawara during the Middle Kingdom. (This mortuary temple was actually so massive that it seems to have inspired the myth about the minotaur and the labyrinth). You can see recreations of these compounds near Memphis and Krokodilopolis in Assassin’s Creed: Origins. Take a look at them and you’ll notice that both compounds have mortuary and valley temples which are connected to each other by a covered causeway. In other words, they have all the right components. Look at them a little bit closer and you’ll notice a few differences, though. The one in Memphis has a massive pyramid. The one in Krokodilopolis has a massive mortuary temple.

Similar to pyramids, temples were situated inside walled compounds. You might think of them as public buildings, but neither pyramids nor temples were actually open to the public. Pyramids were the private property of the pharaohs. Temples were the private property of the priesthoods. This means that most people never saw the inside of them. Temples consisted of rooms that were connected to each other in a straight line. (Storage spaces near the main building often turned the compound into a square). The covered room known as the cella stood at the start of this line. There was a shrine called a naos in the cella which held some sort of statue. Since it was supposed to contain a spirit named a ka, the only people who saw this statue were senior priests. The room connected to the cella was a columned courtyard with a clerestory known as a hypostyle hall. This was open to junior priests, but it was near the cella, so the room was closed to the public. You could say the same thing about the room connected to the hypostyle hall. This was a courtyard called a peristyle hall which had a kind of gatehouse with two towers named a pylon. The peristyle hall stood at the opposite end of the line which started at the cella. The best example of a temple is definitely the one in Luxor. You can’t see a recreation of this particular temple in Assassin’s Creed: Origins, but if you take some time to explore the game world, you’ll come across a lot of similar structures. You can find a great one in Yamu. 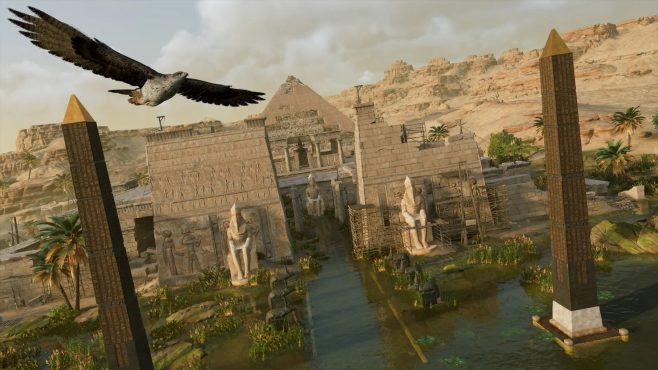 You probably think of them as peaceful people, but the ancient Egyptians carved out a massive empire during the Middle Kingdom. The most important part of this empire was in Sudan. They got most of their gold from the mountains near Kadugli, so the ancient Egyptians built a bunch of fortresses along the Nile River to keep a close watch on things. The biggest one of these by far was in Buhen. (The others were in Kumma, Semna, Dabenarti, Askut, Uronarti, Shalfak and Mirgissa). Since the only parts of this building to survive were the foundations, we don’t actually know most of the measurements, but the structure definitely had inner and outer walls enclosing about three and a half acres of land. These were strengthened with moats, ramparts and battlements. They had a couple pairs of gatehouses and well over a dozen towers. There was even a port. Thousands of soldiers were stationed at the fortress in Buhen, so barracks and storage spaces were built within the inner walls of the structure. (The soldiers don’t seem to have developed any of the land between the inner and outer walls). These were laid out on a grid system. Similar to the temple in Luxor, you can’t see a recreation of this particular fortress in Assassin’s Creed: Origins, but you’ll come across a building which looks a little bit like it near Karanis. The structure is called Pissa Oros Citadel. There are some differences between them, but the two buildings have the same system of walls, barracks and storage spaces.

The game world in Assassin’s Creed: Origins provides a pretty good window into the past. The reconstruction was clearly based on reliable sources of archaeological evidence. I would even go so far as to say that some of the structures could be used in a book about the architecture of ancient Egypt. This would explain why Ubisoft made the Discovery Tour. I just wish that it had a little bit more information about the Pharaonic Period. 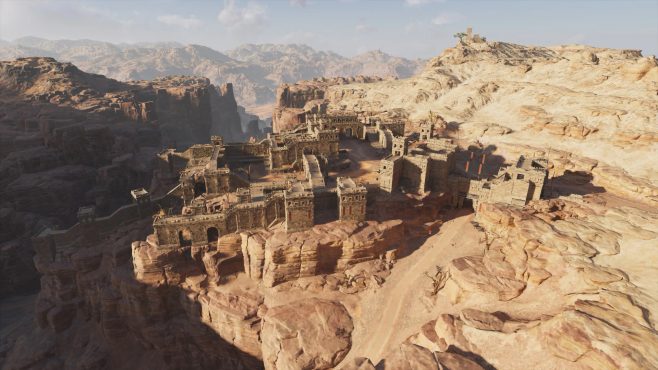 I hope that you found this interesting, but it was a pretty short introduction, so if you want to keep learning about the architecture of the pharaohs, you should really pick up some books. There unfortunately isn’t much on fortresses. There are definitely some good reads on pyramids and temples, though. You can’t go wrong with The Complete Pyramids by Mark Lehner and The Complete Temples by Richard Wilkinson if you’re interested in these buildings. The former will give you a good grounding in the meaning and significance of pyramids. The latter will tell you everything that you ever wanted to know about temples. You can find a lot of speculation and conjecture when it comes to the architecture of ancient Egypt, but these books are just about as objective as you’re ever going to get. I have no reservations about recommending them to you.

Beyond the Farthest Shores