This is me at my most brazenly capitalist. I am sorry.

When I was barely a teenager, I wanted to buy the game Evil Genius. Typically, as long as I had good grades (read: great grades) my mom would buy me a videogame every so often with relatively few questions asked. I was really privileged in that way. However, for whatever reason, I couldn’t get Evil Genius.

I remember reading about the game in magazines, seeing ads for it taken out in the pages of Electronic Gaming Monthly, and trying to watch grainy 2003/2004-era internet videos. I was buzzing with anticipation. I loved, and still love, that 60s/70s vibe. I loved James Bond movies. The campier the better. When it came out the reviews were fine? Respectable even. I certainly must have read Dan Adams’s 7.8 score. But I never got the game.

However, as I have been with a few other things, I’ve been buying up things I didn’t have in my childhood. Like I said, capitalist. Also, like I said, I am sorry. But the reason this is me at my most brazenly capitalist is that I’ve kind of always suspected that the game wasn’t very good, or at least had not aged well. As such, I never bought it. I’ve been playing a copy that Rebellion Developments gave for free when you signed up for their newsletters because the richest capitalists never pay for anything or else they wouldn’t be rich. Messed up, isn’t it?

So how is the game?

Meh. It’s actually not all that great. 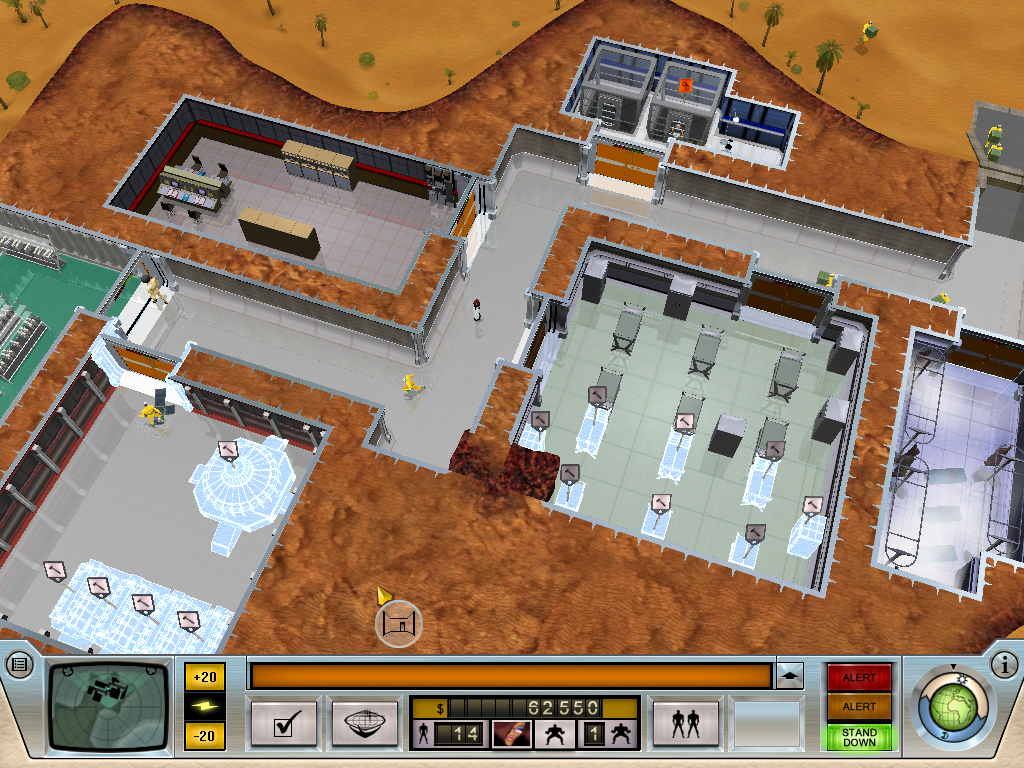 Honestly, not being able to fast forward and having to dig through the encyclopedia to figure out what everything does really bogs the game down. I’m excited for Evil Genius 2 (which I will pay for) but this was a fun experiment.

What I want to dig more into is this special kind of disappointment.

There’s plenty of games that haven’t aged well. Modern game design sensibilities have moved so far from where they were in the near past that its difficult for games to age “gracefully.” Evil Genius is definitely in this camp. But what makes it special is that I never played it before. I don’t have any rose-colored glasses I could put on. There’s no strong sense of enjoyment that my desire is built on, its just my desire.

This all makes for a poor recipe to come back to a game 15 years later. Without that foundation of having had a good time all those years ago, it shows it flaws more than it can show its sensibilities. As much of a joke as it is, it is important to leave things in the past. We should remember the lessons but we need not carry every piece of pop culture with us ad nauseum into the future.

This isn’t a knock on this game. It is a missive on the important of participating in the moment. Endless amounts of lists are produced that talk about the greatest games of all-time but even the concept of “all-time” is faulty. They’re not perpetual fun engines. They belong to a moment, a zeitgeist. Some fantastic examples manage to transcend this but most…deserve to be left in a time capsule and iterated on, relevant only for history and nostalgia.

Is Evil Genius bad? Who cares. By 2020 standards it is not a very good game. Maybe it was very fun in the past. I can’t tell, I’m not a child anymore and I didn’t play it as a child. Let old things die, kill them if you have to.