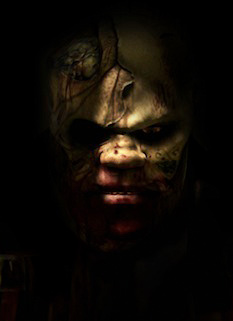 Movies have rarely scared me. Sure, I get startled every now and again, but frightened? Nah.

It wasn’t always that way. When I was a kid I went to see Parasite in 3D. The movie’s terrible, but to a 7-year-old it was quite enough to get me to jump. Especially when one of the parasites fell into a woman’s mouth and sucked her dry until her head exploded.

I mean, Jesus, what the hell was I even doing at that frickin’ movie? I was seven!

But that was then. I haven’t been scared by a movie since.

However, that has started to change a little. In the last few years, I’ve started to get really creeped out by the idea of zombies. They freak me out for some reason. Just the whole idea of the undead and brain eating and all that. I don’t know, it’s so beyond unnatural that I think perhaps on a base level somewhere in my core it just feels wrong. Very, very wrong.

Because they creep me out, I find myself loving them.

From Night of the Living Dead to The Walking Dead, the whole genre just entertains the heck out of me. I can’t say I give a crap about the gore, even though that’s a big aspect – it’s just the concept. Zombie flicks are akin to post-apocalyptic classics like The Road Warrior or A Boy and his Dog. In the sci-fi vein, those films have always had a special appeal to me.

So, when I first heard that the best game of 2010 was going to introduce zombies, it shouldn’t come as any surprise that I was excited. Especially since having hordes of undead swarm the deserts of Red Dead Redemption seemed like such a silly idea.

Yet this collision of gory horror with spaghetti western is done so simply, so beautifully and so entertainingly, it takes an incredible amount of willpower to keep me away from my PlayStation 3.

I think the part that impresses me the most about this expansion is how it just comes out of left field. Zombies have nothing to do with Red Dead or westerns, yet this clash of genres works like a delicious stew. It’s truly an unexpected treat.

The yarn takes up after John Marston has reunited with his family. One night Uncle stumbles into the house looking for some human flesh, and soon the gunslinger’s wife and son join the zombie horde. In an effort to find a cure, Marston journeys through New Austin, encountering old friends (and enemies), saving towns and meeting new strangers who share their twisted zombie tales or spew racist hatred to explain why the dead have risen from the grave. 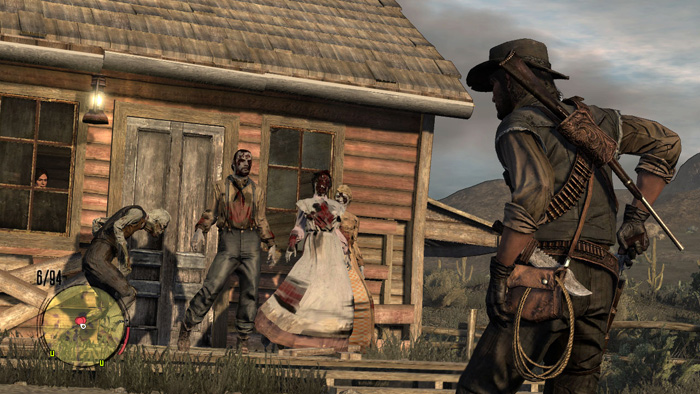 There is nothing subtle about Red Dead Redemption: Undead Nightmare. It’s blood and guts and bullets. You ride through the rain-soaked vistas on an undead steed, struggling to find answers as you fight to save random citizens before they get chased down by a gaggle of flesh-craving creatures. And you must always keep an eye on your ammo, because it’s a rare commodity that cannot be wasted on too many body shots.

That’s right – you wanna kill a zombie, you gotta shoot ’em in the head. And in Red Dead, headshots are like popping balloons filled with watermelon guts.

Undead also mixes it up a little with the zombies you encounter, from the slow and lumbering kind to the quick and dead types.

Wait, what? You don’t have Red Dead Redemption? That’s okay, I’ll give you a minute to kick yourself in the ass.

Done? Okay, cuz you don’t need it. The DLC is playable all on its own, without requiring you to fork over the coin needed to buy the game. But if you don’t already have Red Dead Redemption, then hell, I don’t have anything more to say to you.

P.S. – Okay, I couldn’t bring up that whole face exploding thing from Parasite without including it in this post. What would we do without YouTube?