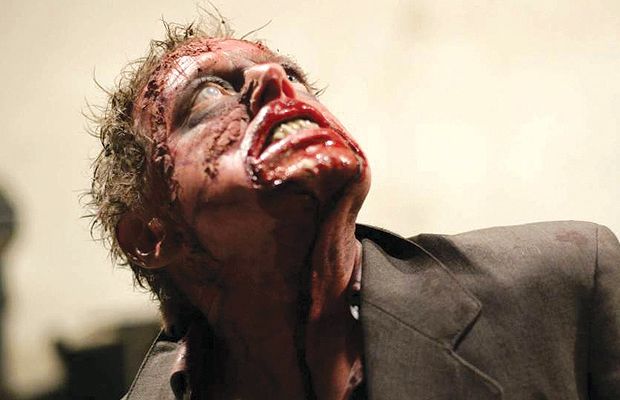 If there’s one thing I like more than surprises, it’s zombies. So imagine my pleasure when browsing local movie times and being surprised by an unexpected new zombie flick titled Rammbock (aka Siege of the Dead).

Now imagine my displeasure at wasting time on yet another recycled pooper of a zombie movie.

Rammbock is Germany’s new contribution to the genre. Released in Europe last year, the film is currently in a limited U.S. release in AMC theaters only.

The film is set in Berlin and opens on our hero, Michael, as a friend drops him off at his estranged girlfriend’s apartment building. Five minutes after the friend drives off, Berlin is in the midst of a zombie epidemic (apparently, the men missed any signs of this on the drive in). Little time is wasted on introduction—at a mere 59 minutes long, Rammbock needs to dive right into the action.

The plot is simple and uninspired: People are trapped in an apartment building during a zombie outbreak. Some potential for the locale exists, for rather than being trapped together, the characters are locked in separate apartments overlooking an interior courtyard. They are able to communicate from their windows while the zombies run rampant below. Unfortunately, instead of focusing on this plot element, the director (Marvin Kren) lets it fall flat.

Had the film been longer, had the characters been developed in any way and had the narrative maybe shifted from apartment to apartment, this could have been a decent genre entry. Sadly, the plot is empty, the characters barely introduced and the narrative centers on our dumpy protagonist and a boy (Harper) he happens to be trapped with.

The zombies—or for you purists out there, the infected (they’re closer to 28 Days than Romero’s hordes)—are nothing new. These zombies aren’t infected with rage; rather,—in a weak twist—adrenaline is the catalyst for the virus. If the victim remains sedate, he might be OK for awhile (but hey, you try remaining calm during the zombie apocalypse). A little stress, a little anger, and zap—the muscles twitch, the eyes eggshell and the oatmeal drool flows.

Let’s face it: Zombies are undeniably cool, but they can only carry a zombie movie so far. The real success of these films rests on the human characters. Unfortunately, Rammbock’s uninfected are pasty and boring. I didn’t care who was bitten, who was eaten or who looked like they might survive. By the 50 minute mark, the only thing I wanted to see rise were the end credits.