Stroll through the streets of Gotham in Arkham Knight and you’ll see some impressive structures. There’s of course the Clock Tower in Chinatown, but Wayne Tower in Bristol and LexCorp Tower in Ryker Heights are good examples, too. Gotham is absolutely filled with beautiful buildings.

The most notable aspect of the architecture in Arkham Knight would have to be its lack of consistency. The buildings in Gotham belong to a remarkably broad range of different styles. With its glowering gargoyles, the Clock Tower for example is clearly Gothic. Wayne Tower is definitely Art Deco. LexCorp Tower has all the hallmarks of Modernism. In other words, the architecture in Arkham Knight is quite eclectic. There’s a bit more meaning to this than meets the eye.

The eclectic architecture in Arkham Knight reflects the long history of Batman as a cultural figure. Jesting with Joker, experimenting with Hugo Strange and prowling around with Catwoman, he began his quest to clean up the streets of Gotham when the first issue of his eponymous comic book series came out in 1940. (Batman appeared for the first time on the pages of Detective Comics in 1939, but he proved to be pretty popular, so the company which created him, National Comics Publications, quickly gave the superhero his own periodical). In other words, Batman has been fighting crime for 80 years.

Batman has barely aged a day since 1940, but the buildings around him have definitely changed. The architecture in Gotham hasn’t stayed the same. With a new style appearing every ten or twenty issues, you can see this quite clearly in the comic book series. There’s a good reason for this: Gotham is supposed to be an American city. 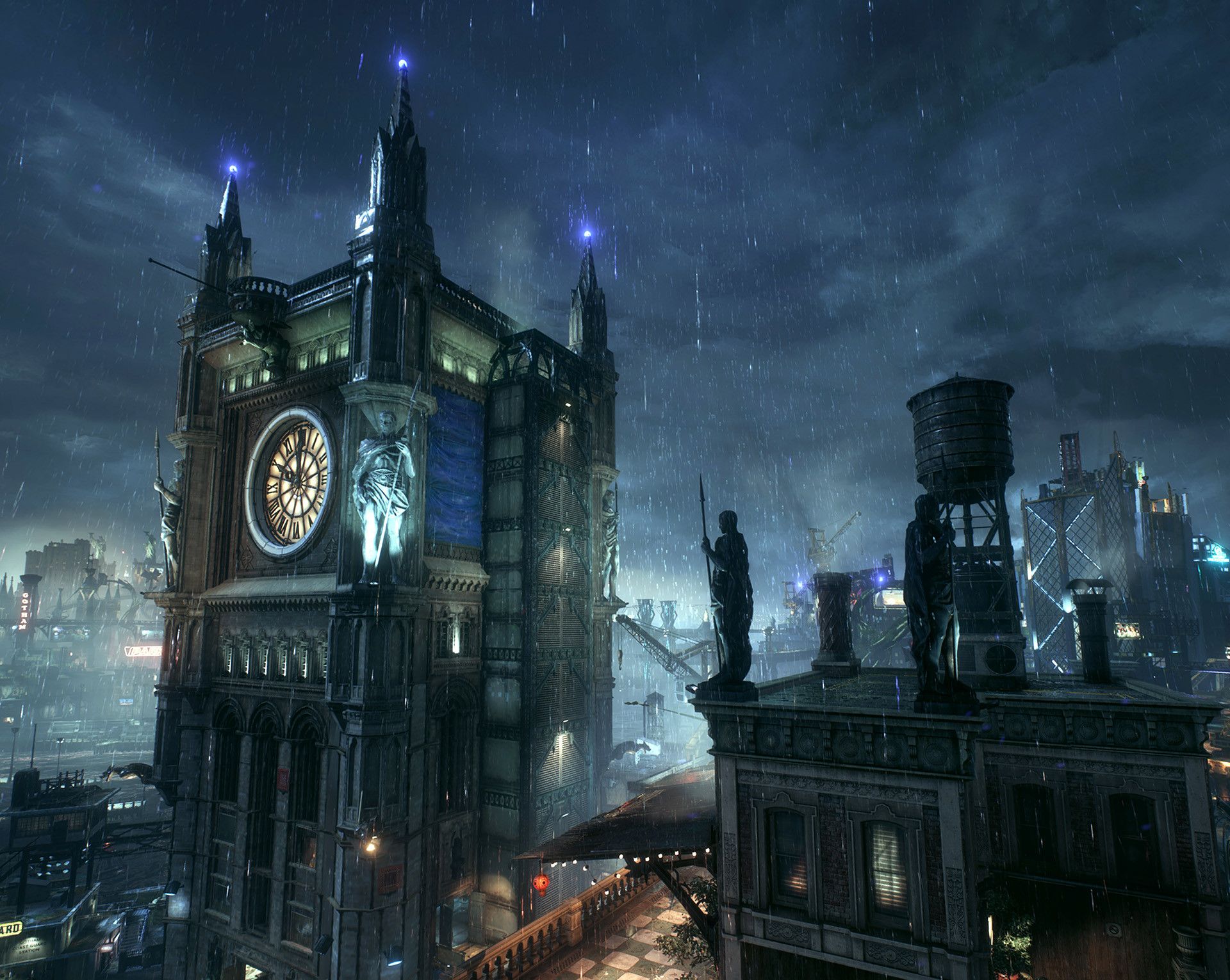 Gothic architecture was replaced by Art Deco before both of these movements were swept away by Modernism in the years following the Second World War. While some of them were demolished in the process, many Gothic and Art Deco buildings were maintained in good condition, though. This produced the kind of eclectic architecture which has become characteristic of cities like New York, Chicago and Los Angeles. The same thing seems to have happened in Gotham. This is definitely depicted in the comic book series, but you can actually experience this development in Arkham Knight. The best places to let it sink in are the Clock Tower in Chinatown, Wayne Tower in Bristol and LexCorp Tower in Ryker Heights.

Gothic architecture is known for its defiance of gravity. Structures in the style have spires, pointed arches, stained glass windows and plenty of statues. These features are instantly recognizable in the Clock Tower. Rising high into the sky over Chinatown, the Clock Tower definitely dominates the surrounding district, but the spires truly make the structure seem like it soars. The pointed arches contribute to this effect. Sitting above the windows, these direct your attention upward by forming a series of triangles which have their bases at the bottom. The spires and pointed arches aren’t the only things which make the Clock Tower seem weightless, though. The building has a bunch of stained glass windows which make it appear pretty wispy, but the precariously placed statues are what really give you the impression that it won’t stay on the ground. Looming large over Chinatown, these make the structure seem like it might just float away.

Art Deco was inspired by aircraft design, so gentle curves, long lines and smooth surfaces are its most recognizable features. The idea was to make structures that were streamlined. Wayne Tower definitely fits this description. Sticking out like wings on a fuselage, the platforms on the upper stories for example are clearly gentle curves. There are lots of long lines, too. Wayne Tower happens to be the biggest building in Bristol, so it’s hardly surprising to find some of these, but the imposing pilasters and massive mullions reveal their presence to be more than just a coincidence. They must have been put there on purpose. The same could be said about the smooth surfaces. There are plenty of smooth surfaces in the parking garage, but the best place to see these would have to be the office of Bruce Wayne. This part of the building is filled with polished stone and finished wood. 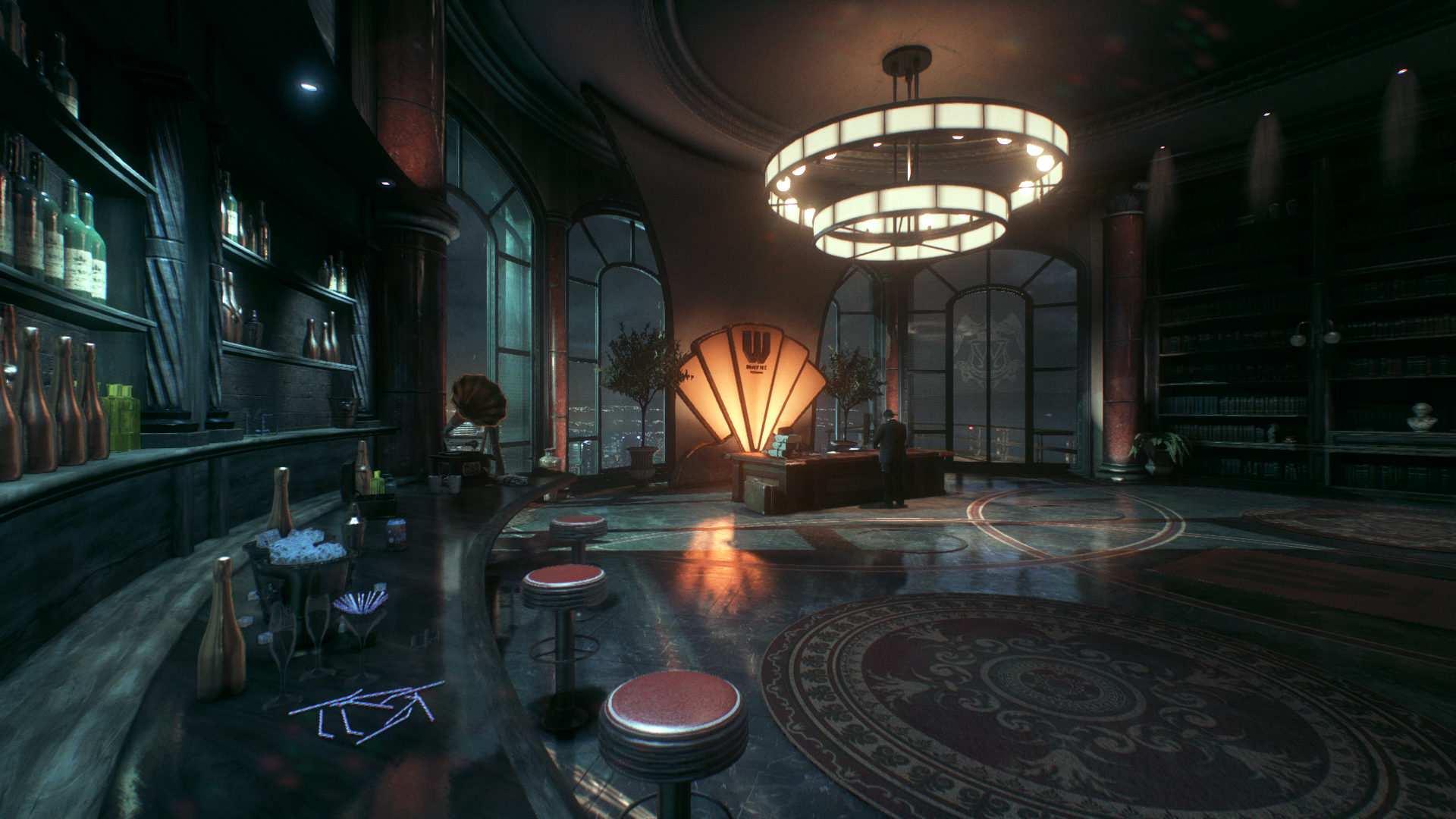 Modernism is famous for its focus on function, economical use of materials and ornamental simplicity. The same could be said about LexCorp Tower. Take some time to explore the district known as Ryker Heights and you’ll definitely come across this bleak building of steel, concrete and glass. The structure is tough to miss. Bright lights shining forth from its upper stories, LexCorp Tower truly beckons you closer. The structure is clearly focused on function, but its economical use of materials and ornamental simplicity are plain to see, too. Since the building is basically just a big box, there’s next to nothing in the way of wasted space, so you’d be hard pressed to find fault with it in terms of its focus on function. The decoration is also pretty understated. With its clean lines and completely unadorned surfaces, keeping things simple when it came to the use of materials and application of ornamentation was apparently a priority.

The architecture in Arkham Knight is quite eclectic. Reflecting the long history of Batman as a cultural figure, Gotham wears multiple masks in Arkham Knight. There’s just a little bit more meaning to be found in this fact, though.

Batman has barely aged a day since 1940, but he hasn’t stayed the same superhero. He stopped camping it up at some point and became a sort of brooding brute. Batman stores a remarkably broad range of different personalities within his apparently timeless body. This turns the architecture in Arkham Knight into a metaphor for the man himself. Similar to how Batman is both goofy and gloomy, the buildings in Arkham Knight lack any kind of consistency in terms of style. Some like the Clock Tower are clearly Gothic, but others like Wayne Tower are definitely Art Deco. Structures like LexCorp Tower have all the hallmarks of Modernism. In other words, Batman and Gotham both wear multiple masks.