Death Stranding, at its core, is about movement. The country has been devastated by . . . stuff. Let’s just leave it at that. And we want to reconnect everyone and set up a nice infrastructure. There are checkpoints and bunkers across the country that we need to run to so that we can re-establish communications. Some of them require you to do things before they’ll let you connect them to the network. Others are happy to connect.

If you were to give me an elevator pitch for this game, I would tell you it sounds uninteresting. The majority of your actual play time isn’t spent fighting, or running for your life – it’s spent keeping your balance, making sure you have fresh shoes and managing cargo. In short, you’re a post-apocalyptic delivery driver. And yes, you are correct, it’s very much like the Kevin Costner movie The Postman. Enough of all that, though, let’s get to the gameplay.

Once you get out of the cut-scene extravaganza, the game is about travelling long distances in a lonely, isolated world. Every new place you go is one that has been cut off from the network and the new Government which was established after the cataclysm. As you make your way west, across the country, you’re re-uniting the people of the United States. 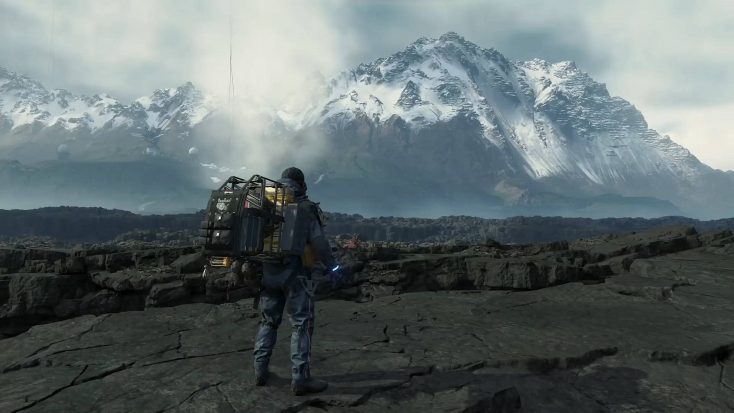 Your goals start off small – you just need to get these deliveries made and outposts re-connected. You have several tools available to you from the start such as ladders and climbing ropes that, once placed, can be left and re-used or used by other players. Once a new area is connected to the network, you can access buildings left by other players and they can access yours. These small additions to the landscape make for an interesting and somewhat unique game experience, and it keeps growing and building on itself.

In the first area of the game, you can create a few small utility buildings like the post boxes that allow you to drop off lost cargo, or a bridge to cover a ravine or gap. Once you get more battery powered equipment and vehicles, you can build a charging station. The more advanced areas of the map allow you to invest in larger and more interesting buildings. These can range from a place to stay and rest to zip-lines that lets you travel over difficult terrain with relative ease.

At the same time, the game gives you other tools to aid your cargo delivery. Sam, the protagonist, can attach “skeletons” to his body (robotic leg supports) to give him extra speed or strength. To aid with the more hostile elements of the world, there are also weapons and other gadgets that are used in your fight against flesh and blood foes as well as those a bit more supernatural. Though, of note, combat is somewhat rare.

At certain points on the world map, you can pile resources into these things called “auto-pavers” that create roads across the often difficult to maneuver landscapes, connecting the larger outposts. These roads are a giant leap from where you started, scrambling over rocks and trudging through the mud loaded down with parcels. Along with roads come vehicles like trucks and motorcycles that make the delivery work easier, safer and faster. Progress! 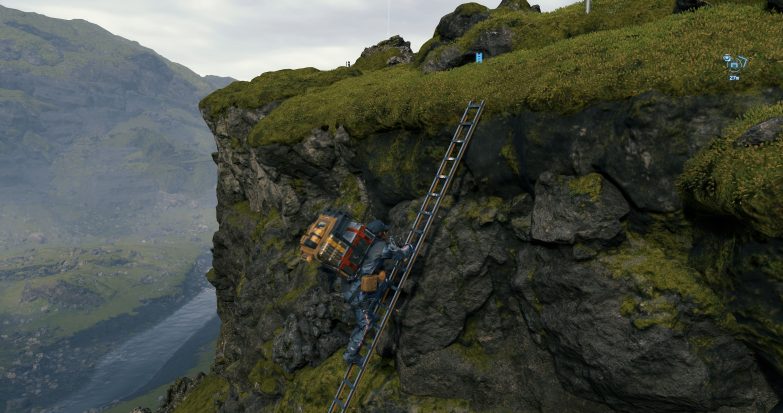 That’s really the hook. It’s progress. From a small start, you go bigger and bigger. You can measure your progress by what you have built and contributed to the world. All the while transforming the landscape into something less hostile, step by step, and this transformation is one that is shared with other players throughout the world. A wonderful wasteland of logistics.

On top of the quantifiable progress visible in the world, there is something to be said for the completion of an endeavor. You are required to take these long journeys, carrying loads of packages and avoiding the enemies and hazards of the world. These missions can require quite a bit of concentration and time spent dodging and stumbling over hard terrain. When you reach your destination and deliver the goods, there’s a release, like a breath held too long. The satisfaction of a job well done – the glow of accomplishment.

My feelings on the plot to this, or any, Kojima games are somewhat irrelevant to the living story that unfolds. All games have stories, simple to complex, but that’s not what we play. Gameplay has its own life and we all have our own paths to travel in these virtual worlds. In this way, Death Stranding is a game about the adventurous spirit and what drives us on, over the next hill. And beyond that hill and the next.