IT: Chapter 2 hit theaters last weekend and with it the latest antics of Pennywise the Dancing Clown. I personally love Pennywise in all iterations. Leaving aside that some of this comes from the fact that Tim Curry was one of two men who first made me aware I had like, a body that like, reacted to external stimuli (the other was Balki from Perfect Strangers), I do find the demon clown weirdly seductive. I don’t just mean sexually (though obviously I mean that too), but I honest-to-god would be an excellent mark for Pennywise’s gambits. A lot has been made of Bill Skarsgård’s ultra-scary modern interpretation, as in, how could any kid be this taken in by an obviously murderous clown?

Evil, hostile clowns have been a thing since time immemorial. Fear of clowns, or coulrophobia, is so common that a lot of modern audiences dismiss them as a sort of kinky fear and take for granted the inherently seductive qualities of clowning (again this isn’t strictly sexual but again – with me, at least – it absolutely rates). Clowns by their nature need an audience and more importantly, need to win them over. This can happen a variety of ways. The most basic version of a clown is a vulnerable idiot – the audience feels sorry for them. The deeper one goes down a clowning rabbit hole, however, the sooner they’ll find themselves confronted with The Bouffon, “bouffon” being the French harbinger of the English word “buffoon.” Bouffon clowns specialize in mockery – specifically mockery of the audience. Where average circus clowns will do anything for a laugh, including hurting themselves, a bouffon clown isn’t afraid to hurt the audience right back. 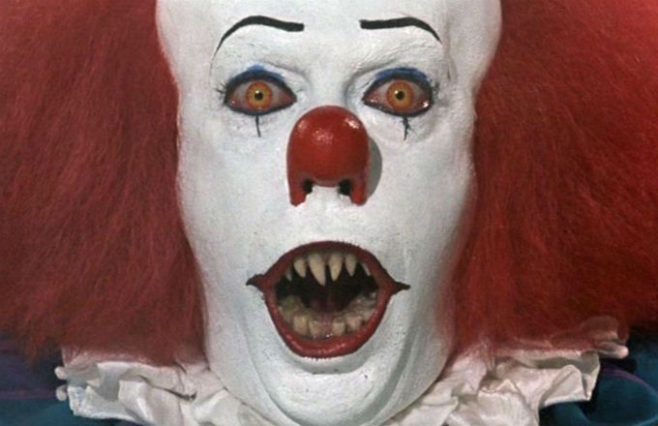 All clowns are lower than the audience watching, which is exactly the reason the audiences tolerate their behavior. A vulnerable clown is pitied while an antagonistic or evil clown is allowed their cheek precisely because the watchers are naturally above them. This is the very engine behind the court jester being the only one allowed to make a mockery of the king.

It’s not actually a surprise that Pennywise’s clown disguise is still effective in luring Derry’s children to their untimely demises. Chapter 2 includes a great scene where Pennywise traps and kills a little girl beneath the bleachers of a well-attended high school football game. He’s drooling and speaking like a creep and clearly bad news, but still the girl eventually falls for his ruse even after she shows signs of an instinct to avoid danger. How does he seal the deal? By promising to rid her of the wine stain birthmark on her face. People generally think of clowns as children’s party hosts and don’t go much beyond that, but the truth is their charms work well on both kids and adults, and evil clowns structure their act around preying on people’s deep-seated insecurities. This is why IT: Chapter 2 held such promise, even if the narrative of teens coming of age is such an evergreen theme that Chapter 1 still reigns supreme among critics. Generally, though, I want to see adults deal with their shit because holy hell I’m still dealing with mine.

Maybe that’s why I still show up for Pennywise. I’m attracted to someone holding up a mirror to my flaws, forcing me to confront them. Clowns are inherently “low” and thus “safe” to engage with, so the idea of an ancient alien evil approaching children in the form of a clown, even a terrifying one, even in 2019, is not a surprise. I myself have recently joined an evil clown troupe. However bizarre it is to be a neurotic, insecure bitch of a performer, I relish the chance to turn the tables on the audience. Pennywise as a construct isn’t unbelievable. Sometimes things are funny because they’re true, and sometimes they’re scary because they’re true. The trick is knowing however it comes, the truth is key. You’ll float too. Down here, we all float.

Clacking Out a Few Kind Words