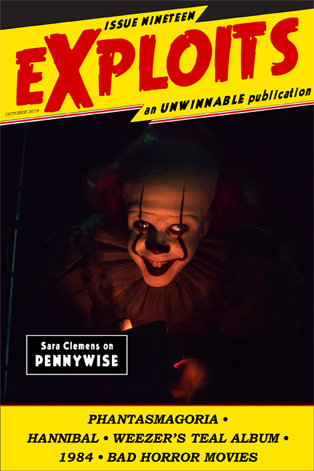 This is a reprint of a feature story from Issue #19 of Exploits, our collaborative cultural diary in magazine form. If you like what you see, buy it now for $2, or subscribe to never miss an issue (note: Exploits is always free for subscribers of Unwinnable Monthly).

Monsters and ghost stories, supernatural or otherwise, have always been about the deep-seated fears of human beings.

Dracula (the character) is most dangerous as a tool for awakening female sexuality, much to the chagrin of the aggressively Victorian male characters, but the Count also represents the invading foreigner hell-bent on upending society as a whole. Bertha Mason, mistaken repeatedly for a ghost during the plot of Jane Eyre, literally and figuratively haunts Thornfield Hall, a symbol of Rochester’s dark past that must be confronted and destroyed before he and Jane can march freely into the future. In Wide Sargasso Sea, Jean Rhys’ feminist and anti-colonial response to Brontë’s novel, Antoinette (Bertha) is herself haunted by the specter of her mother’s mental illness and tragically succumbs – or is driven – to one of her own in the final chapters.

Most prominently used in IT, the fictionalized town of Derry, Maine, is mythologized by Stephen King as the secret home of an epic and ancient evil. He implants a sinister alien force in the dark pit of the sewers and, over time, its malevolence becomes so entrenched in the everyday happenings of the town that Derry’s citizens don’t even notice.

We “other” the things we’re most afraid of, even when it comes from within. So an “all-American” town with its own cookie-cutter Main Street, U.S.A. can sit on top of a rot that goes so deep no one takes any heed of the smell. Children get eaten, consumed; they disappear. The adults turn away – after all, didn’t the same thing happen twenty-some-odd years ago? These things happen. It’s sad, but these things do happen. Pretty soon they drop the “it’s sad” part. Soon enough these things happening don’t even merit a mention at all. And so the cycle repeats.

The white people who murder black and brown people get cheeseburgers, get famous, get off in every sense of the word. They kill and touch and use and consume and the people who can help look away or don’t see it at all or think themselves somehow the victim. Just another day in Derry, Maine, population: America.

The greatest gift the horror genre bestows upon us is hope. It’s traditional for monsters and killers to get knocked down and still keep coming – long-standing evil is hard to destroy – but barring the hokiest of transparent attempts to franchise, usually there’s some final measure (maybe in the form of a Final Girl) to be utilized to save the day and spare the characters their suffering. Over and over, these measures involve hallmarks of healthiness: Clean-living (the implications of which are problematic and deserve their own essay); the power of community; direct confrontation and acknowledgement of the monster (fear) itself, often resulting in a literal and figurative belittlement of the threat, the easier to vanquish or dismiss; or ritual – a physical invocation of history and those who came before. What’s important is the idea we can win. There’s always a chance to win in horror; there’s always light on the horizon, however distant. We hang in; we keep fighting. As Mike says at the end of IT: Chapter 2, “nothing lasts forever.” Let’s all hang in there. Let’s all keep fighting. Nothing lasts forever.

The Exile from Grim Soul