When indie game developers Popcannibal started working on a follow up to their writing game Elegy for a Dead World, they had a few goals – chill beats, positivity and more reading. Elegy for a Dead World was successful in terms of word, award and player counts, but Popcannibal was surprised to suss out that there wasn’t nearly as much engagement on the reading side of things. Personally, that’s just dandy in some ways – writing as a creative expression is valid, a venting of frustration not necessarily always meant to work its way through another person’s heart.

But these devs wanted to crack open the other half of language, the transmission of thoughts, ideas and energy, to shift the focus towards an exchange rather than a discharge. At the same time, they were deep in the Youtube hole of lo-fi beats to study and relax to, like many of the rest of us. The now ubiquitous image that held down this live cast – an anime-style bedroom scene of a young woman going over some notes, pen in and and headphones on ears – was the spark for Popcannibal’s next game, which came together somewhat quickly from a titular and simple premise: Kind Words (lo fi chill beats to write to).

Like Elegy for a Dead World, this is a writing game, though “game” doesn’t feel completely correct in description. There are collectible stickers, objectives and instructions, but no real measurements for success or failure; but that doesn’t mean Kind Words isn’t challenging. The premise is that the player is in their room, a small isometric zone with ambient lighting and a sunny view that is occasionally permeated by an adorable Mail Deer. The deer is either bringing requests for you to respond to or delivering responses to a request for sympathy that you have put out into the game’s universe. You’ll collect stickers with letters, with which you may fill out your room with charming toys and objects and sign off on letters with a flip of flair. 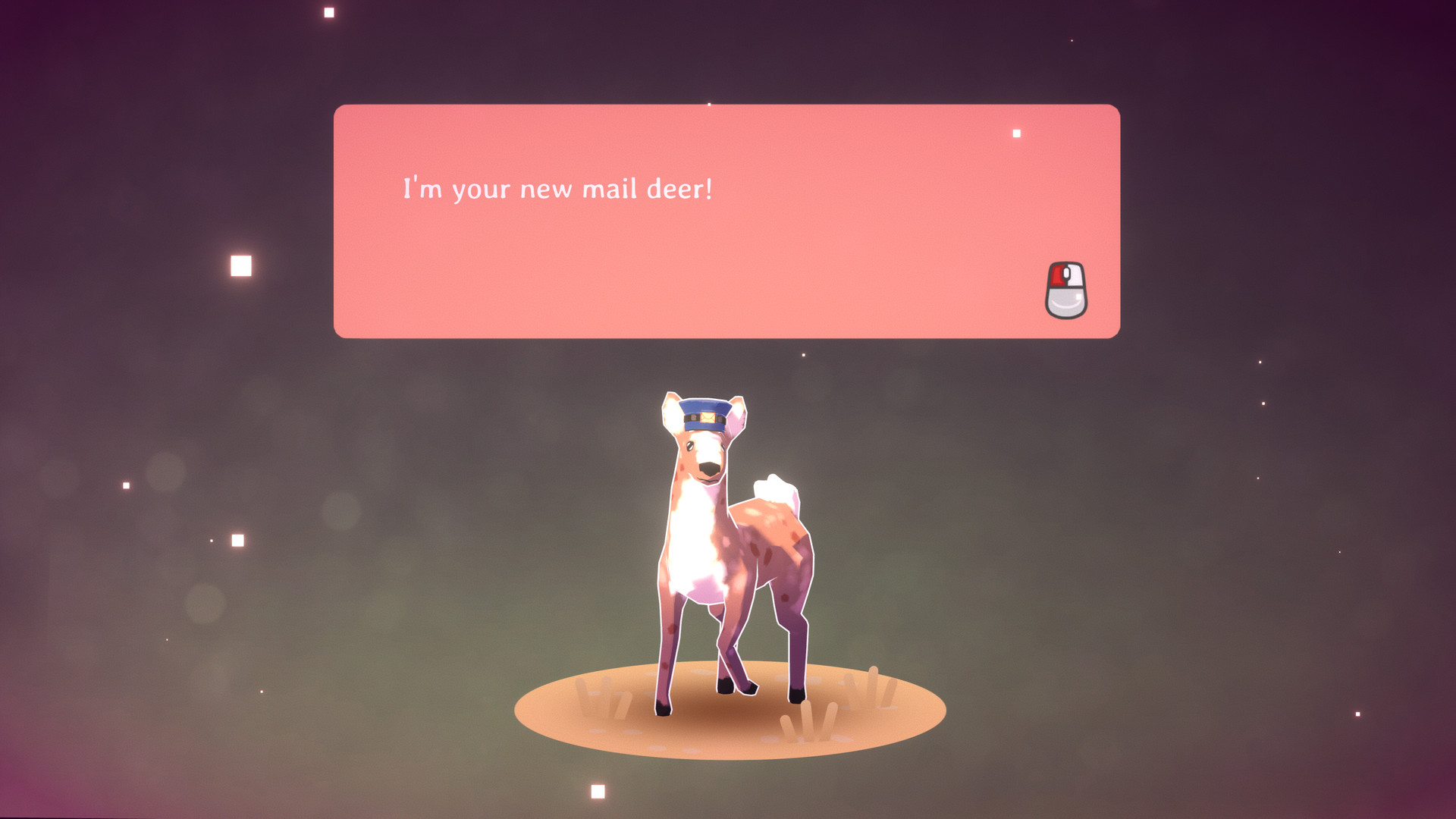 The challenge is twofold – either in exposing you fears and anxieties, or responding with empathy and meaning to someone who has reached out themselves. Maybe it’s the Western patriarchal influence on me, but I do have trouble expressing my fears and anxieties, and sometimes a compassionate word just doesn’t feel like enough. It was pretty intimidating to send out my first request, even to anonymous strangers (especially to strangers), but once I started stammering through the keys I found myself unblocked from even my own well-meaning defenses. And Kind Words doesn’t want you to play therapist, you’re there to listen actively, at your pace. There is also some security in the anonymity of it all, the players don’t have assigned names and are explicitly discouraged from sharing any other social handles and the devs themselves cannot identify their specific user base.

Popcannibal have ways of contacting players inside and outside, but no personal info is exchanged – just a nudge if a letter doesn’t quite live up to the premise of “kind words,” or if someone is suicidal or otherwise in need of more direct intervention. In these cases the devs will step in and provide contact info for help and counseling services, because they know this can be a delicate emotional space to ask players to step up into. They want to keep the community of Kind Words incognito, encouraging and full of big-hearted advice for people who need to vent a bit, but also hear back from the void. 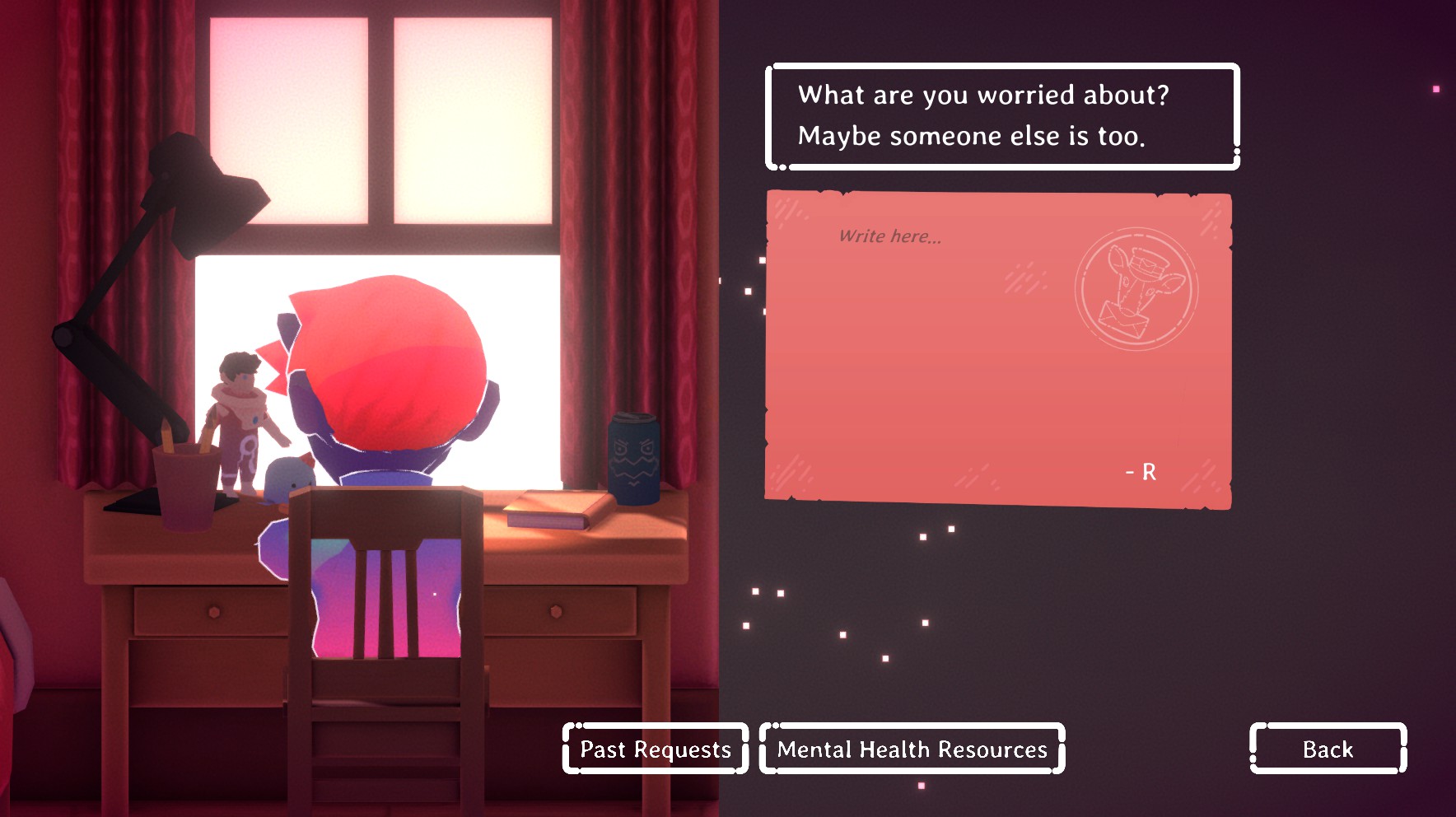 But of course it’s 2019 and you can’t talk about a game trying to maintain an affirmative space in games or online without asking how it’s been fortified against trolls. For these developers, their defenses against possible bad actors were elegantly simple – first, the game costs $5, a perfectly reasonable sum for a small experimental title like this. That initial investment goes a long way to prevent drive-by shit-kickers, since it’s much easier to act the fool when the price is free. There’s also a robust filter system to catch anything harmful as well as reporting tools, but these nets have thankfully been free from bursting with abuse. And while playing through Kind Words is masked behind letters and stickers, they have an active Discord that strives to maintain the supportive vibes.

Still, the launch day success of Kind Words was a surprise and a test for the game’s servers, as glowing word-of-mouth and a write-up from Polygon brought over three thousand players in the first two days, with 70 thousand letters sent between them. And despite all that, Popcannibal only had to ban 30 players. Even among that nefarious cadre, the devs tried to reach out and make sure that these folks weren’t lashing out as a cry for help, and a few admitted that they were dealing with some heavy stuff themselves and actually turned around on Kind Words after a chat. So even among those who sought to merely sow strife, the exchange didn’t need to be entirely acrimonious. 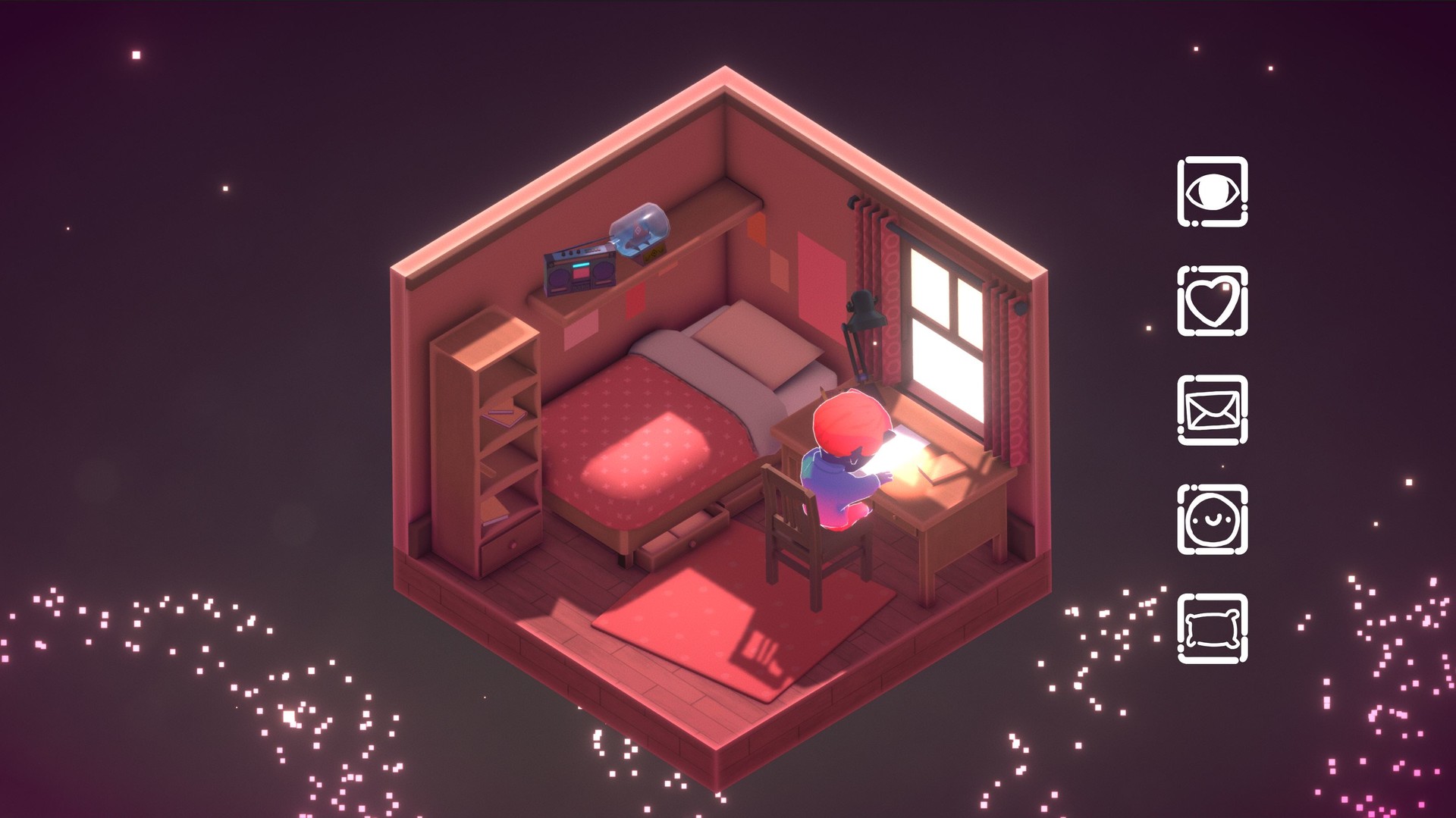 All of these reactions to Kind Words has restored Popcannibal’s faith in humanity. They had a theory that crafting a warm environment, a chill spot to chime in and reach out, could really create opportunities to read and be read, to comfort and be comforted in those dark times that we all experience. Their notion, to pay positivity forward with actual advice and meaningful feedback, has already surpassed their modest hopes for the project. It feels great to write, to express that you’re hearing someone and their struggles are valid, and to clack a little love their way. It has me sending more postcards, texting family members and faraway friends regularly, reminding myself that love comes around and goes around best when fanned by many hands.

The Mumbling of Control