Stroll through the streets of Red Grave City for long enough in Devil May Cry 5 and you’ll pick up on something strange: the place is being pulled apart. The cause of its destruction won’t take you long to figure out. You’ll soon discover that a tree called the Qliphoth is responsible.

Tearing up the streets, the Qliphoth is definitely destructive, but it’s creative in a certain sense, too. The concrete in Red Grave City isn’t just removed. It’s replaced. Breaking down its inhabitants into some sort of slime, the Qliphoth slowly turns Red Grave City into a fully functioning biological organism. Buildings become bones. Train tunnels become tracheas. In other words, architecture comes alive in Devil May Cry 5. There’s more to this than mere shock value. History has a hand in things.

Japan experienced a period of rapid economic development in the years following the Second World War. This had a profound impact on its urban centers. Turning them into megacities, people flooded into places like Tokyo, Osaka and Nagoya in search of a better life through stable employment. Influenced by the rising cost of real estate, landowners looked for ways to make more profit from their properties by investing in architecture. The result was a process of urban renewal which went on for decades. Buildings were constantly being removed and replaced. 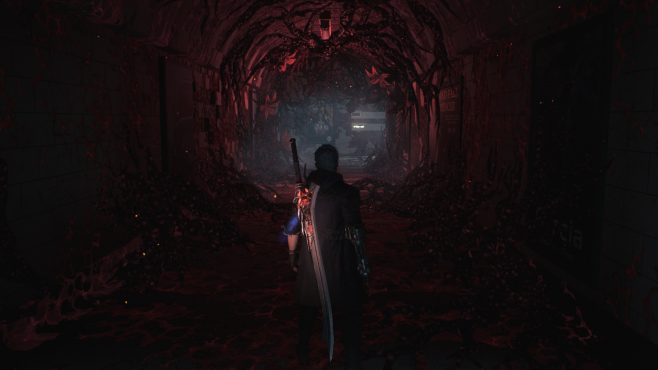 The response to this by architects like Kisho Kurokawa and Kiyonori Kikutake was a movement called Metabolism. Thinking about urban renewal in terms of biological growth, Kurokawa and Kikutake came up with the idea of creating buildings that could become bigger and taller over time. The key to realizing their idea was a sort of cellular system. In other words, they worked with prefabricated units that could be added to a structure as the situation required. The best example of their work is the Nakagin Capsule Tower. The building is basically just a bunch of blocks.

Red Grave City is transformed by the Qliphoth into a biological organism. This recalls the response by Kurokawa and Kikutake to the process of urban renewal that came to pass in places like Tokyo, Osaka and Nagoya. You can see this throughout the game world.

The first thing which you’ll see in Devil May Cry 5 will be the tangled roots of the Qliphoth. Since the branches of this tree grow below ground, it’s actually the roots which you’ll find rising up into the sky. Pulling apart Red Grave City, they’re a bit like really big weeds. You’ll come across them breaking down doors and fracturing floors in almost every building which you enter. They’re as much animal as they are vegetable, though. Puffed up with a sort of pulsating sap, they have a pink appearance which recalls the marrow on the inside of a bone. They definitely have a similar function. Supporting their walls in the same manner that marrow maintains bone structure, the roots of the Qliphoth weave, wind and wiggle their way through the rooms of most buildings. These can sometimes be seen collapsing after the roots are removed. 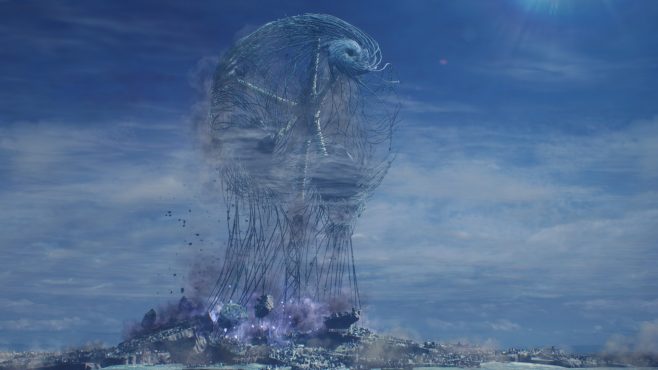 Sneak into the train tunnels below Red Grave City and you’ll see a strange substance. Having seeped in through the ceiling, there’s a goopy sludge covering most of the walls and floor. This goopy sludge is actually made from people. Breaking them down into slime, the Qliphoth can be found turning the inhabitants of Red Grave City into what you could probably call the basic building blocks of living architecture. They become the biological equivalent of concrete. In this particular case, the Qliphoth is apparently employing them to build something along the lines of a lung. The process of transformation isn’t quite complete, so it’s hard to be totally sure what’s happening, but the empty space definitely gives this embryonic organ a pulmonary appearance. Sticking to their ceiling, walls and floor, the slime creates a cavity in the middle of these train tunnels which recalls a trachea.

The closing cutscene in Devil May Cry 5 shows Red Grave City being turned back into concrete. Why is biology beaten? The answer is rooted in history.

Metabolism wasn’t just about style. It was about society. Kurokawa and Kikutake stated their objective in a manifesto called Metabolism: Proposals for New Urbanism. Explaining why they gave the movement its name, they declared that “we are not going to accept metabolism as a natural process, but try to encourage active metabolic development of society through our proposals.” In other words, Metabolism was about making the world a better place. The idea was to promote democracy through affordable housing.

The problem is that landowners want less democracy. Properties produce the most profit when the buildings on them exclude as many people as possible. This at least partially explains why Metabolism failed as an architectural movement. Landowners weren’t buying the buildings.

Why does it matter that Devil May Cry 5 beats back biology? Instead of getting behind Kurokawa and Kikutake in their promotion of democracy, the developer behind the game, Capcom, decided to play it safe by sticking to the established story. Similar to Metabolism, the Qliphoth comes to nothing. Metabolism wasn’t destined for failure, though. The movement could have succeeded if more people had called for the type of change that Kurokawa and Kikutake were trying to bring about. Capcom doesn’t seem willing to make a stand. We, on the other, hand should.