Something about The Witcher 3 makes finding your way around its largest city, Novigrad, surprisingly intuitive. This defies an easy explanation, but at least part of Novigrad’s legibility comes from a quirk of our own psychology.

People put together mental maps of the places they inhabit. The process is completely automatic, so it’s performed without even the slightest thought, care or intent on our part. The reasons for this are purely biological. Helping to ensure the success of our species, we evolved in such a way as to quickly and easily recognize patterns in the world around us. We use this ability for several different purposes, but the most important is probably navigation.

In a highly influential study by the urban planner Kevin Lynch, mental maps of cities were found to consist of five distinct components: paths, edges, districts, nodes and landmarks. While some of these terms probably seem strange, almost everyone is familiar with the spatial features which they represent.

Lynch looked at Boston, Jersey City and Los Angeles in particular, but you can find these five spatial features in any urban environment. Think about your home town. How many of the streets can you name? Does it have any rivers, railways, or power lines? Where does everyone do their shopping? Are there any public squares or parks? Which buildings are the most distinctive? In answering these few questions, you’ve just identified its respective paths, edges, districts, nodes, and landmarks. 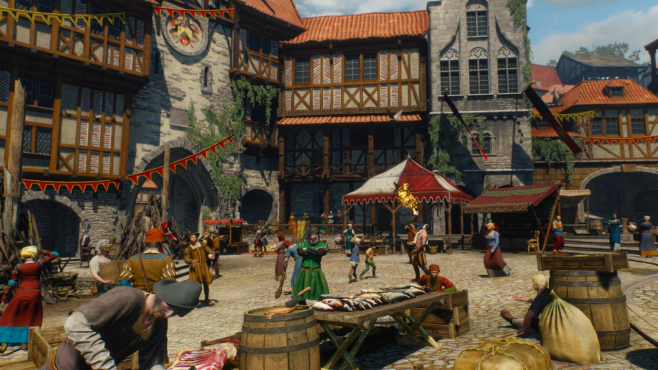 The developer behind The Witcher 3, CD Projekt, integrated these five spatial features into Novigrad’s urban planning to give the place a sense of structure. This was largely responsible for its legibility.

Let’s take a look at what holds the place together.

Paths are devices which simplify travel. Guiding people from place to place, paths are primarily important because they provide connections between nodes. Facilitating movement throughout the city, Novigrad’s paths are its weaving, winding and sometimes even zigzagging streets. The shortest distance between two points will always be a straight line, so these may not necessarily be the most efficient means of getting around the place, but you can at least count on them to be going somewhere. Most of them either begin or end at nodes like the public squares in Gildorf and Glory Lane. Few arrive at a random dead end.

Edges define boundaries between districts. They come in several different varieties, but the ones which you’ll find throughout Novigrad are mostly modifications of the natural environment. The river separating Farcorners and Glory Lane provides a pretty good example of this. Marking the line between city and suburb, the boundary established by this waterway has been strengthened by means of a massive wall. You can see something similar near Hierarch Square in the form of a steep cliff between the Bits and Gildorf. Spend enough time staring at this cliff and you’ll notice that it’s completely covered with a stone revetment.

Districts are places with shared characteristics. They’re often cultural, but these shared characteristics can be of almost any kind. Take some time to explore Novigrad and you’ll soon see what I mean. You can identify districts by the culture of their inhabitants, but you can differentiate them based on their buildings, too. Glory Lane is filled with irregularly shaped structures made from a traditional material known as wattle and daub. This consists of soil, clay and straw held in place by a wooden lattice. Gildorf, by contrast, is filled with evenly proportioned buildings made from stone.

Nodes are places where people tend to gather. They’re focal points of activity, so nodes are normally found at regular intervals along a path. This definitely holds true for Novigrad where they’re mostly marketplaces. There’s a marketplace in almost every district, but you’ll come across the main ones in Gildorf and Glory Lane. Bustling with various forms of activity, they’re filled with actors, merchants and musicians. There’s always a handful of soldiers to keep the peace, too. Catering to such considerable crowds, most of Novigrad’s marketplaces offer a couple of communal amenities like water wells and covered seating. 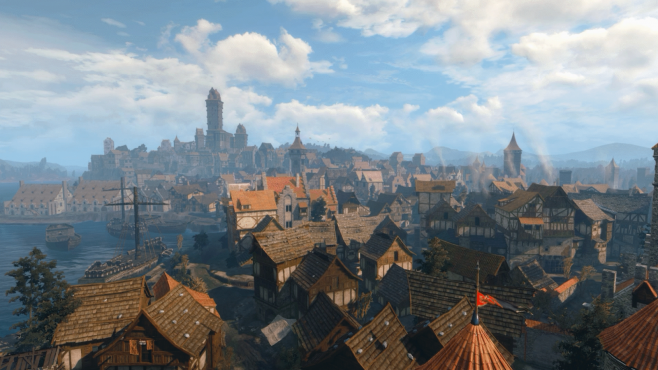 Landmarks are devices which allow people to pinpoint their location. You’ll pretty much always find them near a node. Since these two components of a mental map are mutually reinforcing, landmarks lend importance to nodes, but nodes give meaning to landmarks. You can see how this works throughout Novigrad where nodes like the public squares in Gildorf and Glory Lane are closely associated with landmarks like the Passiflora and the Chameleon. With its vaulted ceilings and soaring clerestory, the Vivaldi Bank, for example, is one of the most distinctive structures in the city. The building is found right beside Hierarch Square.

In designing The Witcher 3, the game’s developer, CD Projekt, used these five components of a mental map to give Novigrad a sense of structure. This helped to make the place legible.

Why then can you still get lost in it?

You’ll come across these five spatial features in any urban environment, but their complexity is necessarily going to be greater in some cities than others. Places aren’t equally legible. Novigrad’s urban planning happens to be particularly complicated. There’s a pretty good reason for this, though.

Novigrad was made to look like a medieval city. In contrast to their classical and modern counterparts, medieval cities grew and evolved without any form of regulation by a central authority. Since their development was basically random, the different relationships between their paths, edges, districts, nodes and landmarks were characteristically complex. Taking the form of strict adherence to a grid system, the majority of classical and modern cities on the contrary were carefully curated. Novigrad reflects this complexity. In other words, these five spatial features can be found in the place, but they aren’t always clearly expressed. This lack of clarity is however due more to historical precedent than poor urban planning on the part of CD Projekt.