The sky was a steely blue blanket of fog the morning I left to play the hands-on demo of Frogwares’ newest detective adventure game The Sinking City. Frogwares is best known for their Adventures of Sherlock Holmes series, another set of detective adventures that I had heard good things about but tended to avoid due to reaching a Sherlockian critical mass in my other pop culture consumptions. My ears perked up, however – or, more appropriately, the finer hairs on the back of my neck stood on end – when I got an email from their PR rep describing The Sinking City as a game based on their previous games’ infrastructure but pulling narratively from the world-building of HP Lovecraft’s oeuvre. Who can resist a glimpse into the virtual abyss?

The PR office was run out of a retrofitted apartment in my very own neighborhood of Bushwick, Brooklyn, a spooky coincidence that allowed me to take a luxurious open-air stroll to my appointment despite the threatening weather. Once inside, a charming French-accented chap welcomed me with a steaming cup of tea and an invitation to have a seat in front of an impressively large LCD display. Take away the tech and throw in some period garb and we’d be well on our way to a Masterpiece Theater adaption of one of Lovecraft’s stories. The IRL atmosphere couldn’t have been more appropriate for exploring the supernaturally flooded city of 1920s Oakmont, Massachusetts.

Playing as the private investigator Charles W. Reed, The Sinking City starts the player off in media res as he experiences the first of a recurring nightmare/hallucination of a drowned city harboring something ancient and as foreign as it is familiar, a mystical being longing to consume the whole of him and whatever else remains of the town. By a city “drowned” I mean Chuck Reed may be traversing a typical sidewalk in these dreams but the waterline is 100 yards above his head. It’s unmooring and unnerving stuff, and a terrific start to a game based on Lovecraftian myth. 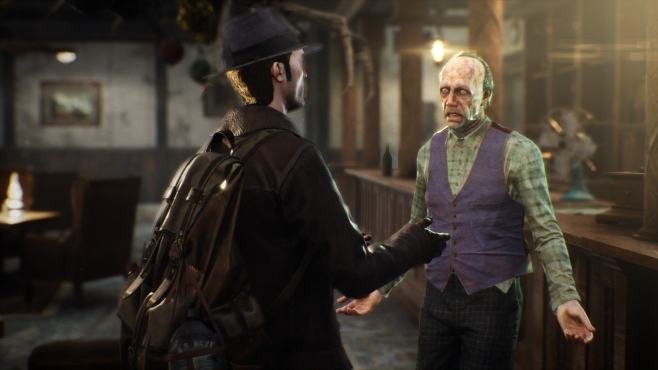 The world is impressively open in Frogwares’ latest outing, something that’s a bit of a departure from their previous games, from what I understand. The demo included the first two missions of the game’s main narrative, and my friendly PR guide dutifully kept me on task as I made my own progress through the world, even as I caught several glimpses and hints to possible sidequests. I’m typically a slow player, preferring to explore every nook and cranny in a game’s world, stopping to read any and all lore and smell all the simulated roses, so to speak. Ultimately this meant I only finished the first of the two available missions during my allotted time, but it was impactful enough to leave me wanting more.

The Sinking City’s environmental storytelling is excellent, with grisly, fishy set-dressing peeking through an overwhelming clammy haze that helps to put a real chill into one’s bones. The game has a resistance to leading players around by the nose, and the investigative parts of the story require satisfyingly humdrum tasks (this is being a detective, people) like finding the local newspaper offices in order to dig through dusty archives and interview bored receptionists for pertinent info. Did someone mention the cross streets of said newspaper building in a bit of dialogue? Great, pull up the in-game map and mark the corner yourself because the game is certainly not going to do it for you, gumshoe. I couldn’t help but be reminded of all the times I played early Infocom text adventures, which often required a real-life pen and notebook to be kept close at hand.

I couldn’t help but be reminded of all the times I played early Infocom text adventures, which often required a real-life pen and notebook to be kept close at hand.

Exploring Oakmont’s near-abandoned streets and decrepit buildings let me stop and talk with its various denizens, including the patriarch of the Throgmortons, a simian-looking Slick Ricky of a local politician who was concerned about the whereabouts of his missing son. The case he set me on led me to exploring an abandoned warehouse where I psychically pieced together the events of a fatal tussle between three men by tapping into an otherworldly memory space that it seems only Reed has the ability to access. Moments of heightened tension leave ghostly impressions that a player must reorder correctly to find a clear narrative that leads to the next set of clues. Doing so pointed me towards a local watering hole to find the suspected murderer of Throgmorton’s wayward son. As mentioned before, the game didn’t rely on hand-holding when it came time to find the tavern – I had to wander around looking for a flickering beerlight to find my way like any other newcomer to a strange town.

Once I did and intimidated the barkeep well enough to give up the key to the suspect’s upstairs room, I had my first face-to-face with an Innsmouther, a disconcerting fish-human hybrid that represented Oakmont’s blue-collar underclass. The case got knottier from there, with the suspect suggesting that something more sinister was afoot in the waterlogged city and that furthermore, Throgmorton knew far more than he was letting on when it came to the deeper mystery of the city’s flood, the citizens’ seemingly contagious mass-hysteria, and perhaps even my own character’s distressing dreams. Here the game gave me the choice to turn the Innsmouther over to the Throgmortons or lie and say he gave me the slip. As “eat the rich” is this magazine’s unofficial motto, readers need not guess which way I chose to go.

Traversing the flooded streets of The Sinking City left a lasting impression on me as I piloted a rickety motorboat from location to location like a modern-day gondolier navigating the murky canals of a downtrodden Venice. After finishing my time with the demo and bidding farewell to my host, I stepped back outside into the streets of my own neighborhood. Details of puzzles left unsolved buzzed in the back of my mind as cold needles of rain pierced my too-thin jacket for real. Just like those in the adventure games of yesteryear, they were likely to seep into my unconscious thoughts, haunting my dreams until their mysteries were satisfied. Lovecraft would be pleased.

The Sinking City will be available for PS4, Xbox One and PC on June 27.

Endgame and the Specter of Representation

Resurrectionists Gone Wrong: The Tale of Burke and Hare, Part 2