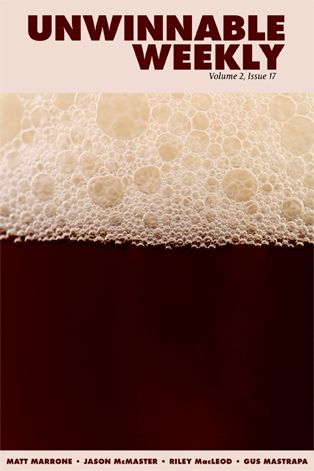 This is a reprint of the letter from the editor in Unwinnable Weekly Issue Sixty-Nine. You can buy Issue Sixty-Nine individually now, or purchase a one-month subscription to make sure you never miss an issue!

The day after Halloween, my RPG group played the Call of Cthulhu role-playing game for the first time in something like twenty years.

Based on the writings of H. P. Lovecraft, Call of Cthulhu is a horror game set in the real world – in the case of my campaign, in 1920s-era New York City. Back in junior high, we played it like D&D with Tommy Guns, which lead to frustrating attrition among players. Coming back to it now, I find an elegant and subtle system that we, as teenagers, were completely incapable of playing.

In the lead up to running the game, I came across an article (Apologies, I don’t recall the author and can no longer find it. If you can, drop me a line!) that explained how Call of Cthulhu is the most heroic of all role-playing games. In games like Dungeons & Dragons, the core goal for players is improvement. Over the course of games, their characters grow more experienced and accumulate hordes of treasure and magical artifacts. This is essentially true of every RPG I’ve ever played.

Except Call of Cthulhu. Because it is a horror game set in the real world, characters are frail things, especially compared to their brethren in other games. Worse, it is impossible to mitigate that in an impactful way with special equipment. Like the real world, anyone with a gun (which, depending on the model, can do up to ten points of damage before bonuses) poses a significant risk to a character’s health and well-being (most investigators in my current party have around 10 hit points). An outré monster, then, with squamous bulk and a myriad of claws and tentacles, represents a nearly impossible physical challenge.

Exposure to the supernatural also preys on the sanity of investigators. By merely seeing something unnatural, they stand to lose sanity points. Lose enough and an investigator will be plagued by psychological traumas. Lose them all and the character becomes irrevocably insane and is removed from player control.

The one thing characters gain through the course of the game is knowledge. They are bound together because they have glimpsed the true and terrifying system of the world that lurks, unseen to most, beneath the veneer of civilization. Each brush with magic or monsters, every case they work, adds to the knowledge even as it erodes their sanity. In this way, the death of a character is, perhaps, a kind of release. A goal.

These fragilities makes the investigators truly heroic. They persist in the face of their assured destruction, because to do anything less is to doom the world. They have no promise of reward and no prospect of retirement. The game is, in fact, designed to destroy characters in interesting ways.

I am looking forward to seeing what dire fates my players find for themselves and, unlike our teenage selves, I think they are too.

Eye of the Beerholder Episode 11, probably dropping sometime next year, is dedicated to our reactions to the first Call of Cthulhu game. Keep an eye peeled or sensory stalk extended for that one.

I’d also like to announce that, starting in January, we will be moving from weekly publication to monthly publication. While I love the pace that a weekly demands, I think the extra time and size of a monthly magazine will afford us the ability to produce a higher quality product filled with a more varied collection of stories.

I think last week’s Superhero Issue was a good starting place for what to expect. I had great fun doing theme weeks back a few year ago and I think some of the best writing Unwinnable has produced came out of them. So for each issue of the monthly, expect a core of essays, between four and eight, to delve into the intricacies of a single subject. Our January issue, for instance, will be tackling the myriad experiences of women in games who live and work abroad.

We’ll have a number of stories each issue that aren’t on theme as well. Rounding the whole thing out will be a collection of columns, sidebars and other shorter pieces. We’re still plotting things out, but expect 120 pages or more a month, populated by the same amazing words and art you’ve come to expect from good old Team Unwinnable. I can’t wait to share some of the new features we’ve got cooked up! Like this one, gosh, it is going to melt your eyes when you see it.

Anywho. In this week’s issue, we continue our series of Unreal Engine-sponsored interviews with Planet Alpha 31’s Adrian Lazar. Matt Marrone brings us on a brief pub tour of Ireland with a pint-sized companion. Jason McMaster helps his father take flight one last time using videogames. Riley MacLeod reveals how videogames helped him move past an abusive relationship. Finally, Gus Mastrapa follows up last week’s Dungeon Crawler cliffhanger with an ever bigger one.