Contrary to popular belief, being alone rules. Do you know what you can do when you’re alone? Whatever the fuck you want. My father used to say, “Most people take away your solitude without really bringing you company,” and I’ve found that to be true. Alone-ness doesn’t necessitate loneliness any more than company necessitates pleasure.

No one understands this better than Wayward Manor, the titular sentient house in Neil Gaiman’s 2014 videogame collaboration with The Odd Gentlemen. After the game’s announcement in 2013, the internet gushed in anticipation. It went on my Steam wishlist as soon as possible. After the game’s release in 2014, terrible reviews poured forth. It remained on my wishlist, untouched.

But as I considered my August column, Wayward Manor went on sale – and I’m willing to play a non-amazing game for $6. I’ve been underwhelmed by games for significantly higher prices. As a lifelong Gaiman fan, I had to try.

The premise: You, a ghost, awaken in a Gothic New England manor in the 1920s, having been unwittingly released from a chest by a servant girl. The house speaks to you in Neil Gaiman’s soothing British voice, gently requesting that you scare away its horrible residents by preying on their innermost fears. Immediately, I liked the house. The house is a selective misanthrope. The house wants to be left alone with its ghost pal. The house is relatable.

The wealthy family you’re attempting to evict sucks in a general way: a mean dad, a vain mom, a colonialist grandpa, two constantly fighting twins and a son who keeps blowing up the statuary. Given the opportunity, they’re mean to the one sympathetic human: the servant girl who released you, who says she was treated better at the orphanage and who keeps trying to reunite with her stuffed bunny (which the others continually take away). She’s the one character the house instructs you to protect.

In Mashable’s 2013 announcement, Gaiman said, “Normally in a game, if you’re in a haunted house, you are going to be walking through it intrepidly with your flashlight, your bell, book and candle, and your copy of the Necronomicon and you keep going until you find the ghost. In this one, all you want to do is be left in peace with your lovely house and be left alone.”

Yes! That is what I want. To be left alone. “I could feel the dust settling across my trestles. That speckled blanket is so welcome,” says the house. “Three floors filled with nothing but the drafty emptiness I desire.” I almost shuddered with relief imagining that many floors all to myself (currently, I have one room). 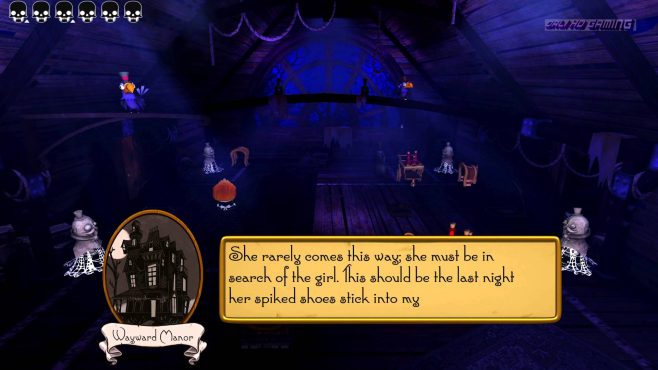 This column has covered gorgons, dragons, goth crocodiles and the occasional human I want to befriend, and a sentient house fits the friendship bill as well as any other. I mean, Wayward Manor is an attractive goth with a cool accent. It fits perfectly into the parameters of this column.

And it’s not even my first haunted house!

I was born in a haunted house (this one). I mean, some people (my dad) say it isn’t haunted, but other people (my mom, subletters) disagree. Plenty of people died there – it’s an old house, a nineteenth-century High Victorian Gothic. Supposedly, a roofer fell to his death while building the tower.

One night when I was a baby, a student to whom my parents sublet a room came home late in the dead of winter. He walked into the front hall, took off his shoes and saw a man on the stairs. “Michael?” he asked, thinking it was my father. The shadowy figure made no reply. Then the student screamed and ran back into the snow, shoeless. He returned in the daylight to pack his things.

My father says that guy was wasted. My mom says she thought that guy was a creep. She believes that the house, and its accompanying spirits, were protecting us from him. I have no trouble believing that a sentient house like Wayward Manor would be similarly selective, protecting the servant girl while scaring her employers.

The true spectre of Wayward Manor is, of course, the gameplay. And to be fair, it’s not great. The reviews I’d read in 2014 called the gameplay “atrocious,” “terrible,” and “ghastly.” I would call it “fine.” To me, it just felt like a cute puzzle game. There were frustrating elements – object responsiveness in particular – but many of the levels soothed me, their art style charming and eerie. The occasionally unsatisfying puzzles were balanced by dark rooms full of poisoned candy troughs, taxidermied wildlife, and vomiting dolls. It almost felt like home.

What Was the Question? And Why Do You Ask?