I don’t consider myself a horror buff of any kind, but I do occasionally enjoy scary movies/games/books. When I was younger, I used to read spooky stuff all the time – or at least a lot of Stephen King. Then one day I decided I’d try reading Phantoms, by Dean Koontz. I don’t remember why I decided to pick this particular novel up, and if the other works of his I read afterward are any indication I probably would’ve avoided him like the plague had I tried them first (seriously, a lot of his stories are very bad), but holy shit. Holy. Shit. Here’s the Thing: despite Koontz predisposition towards dumb campy schlock that’s stupid and dumb and I hate it, Phantoms is to this day the most terrifying book I’ve ever read in my life and has become the benchmark to which I compare all other scary stories.

The setup is simple, but at the same time instantly spooky and engrossing. A woman living in a remote mountain town is returning home with her younger sister in tow because their mother recently died and she couldn’t very well leave her teenage sibling without a guardian. Upon their arrival and after a minute or two of idle chitchat while driving, they start to notice that something is off. Sure, this is a quiet mountain town with a fairly small population, but they haven’t seen a single person on the sidewalk or another moving vehicle. It’s as if everyone suddenly disappeared – especially once they begin to find dinner tables with still slightly warm but untouched food on them, empty idling cars and unoccupied rooms that were locked from the inside. And there are no sounds – not even the occasional bird chirp.

All manner of creepy things begins to happen rapidly as the sisters investigate and eventually meet up with a handful of police officers from a nearby town who have also come to check things out. Menacing voices come out of sink drains, a massive pile of jewelry and fillings and pacemakers is discovered and one of their group vanishes silently in an instant. Then there’s the giant moth. Fucking Christ, that giant moth. Yes, this sounds like some sort of spooky ghost story but it’s so much worse than that. 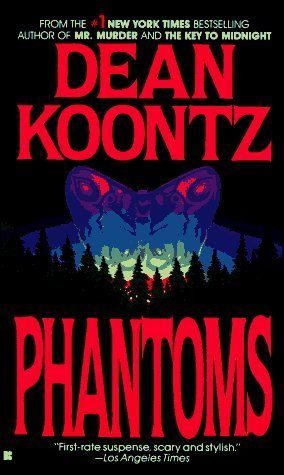 This is where I’m going to stop for a moment and tell you that, if this sounds like a book you’d like to read, please stop here and go do that before continuing. I can’t explain why this book is so goddamn scary without spoiling things, and it’s much more effective if you go into this blind.

Up to this point in the story, I was sufficiently creeped out, as one would expect. But it’s actually the reason behind all of these events that truly terrified me: a very old, very smart and very insidious creature has come out of hibernation to feed itself. It has no natural, definable shape (basically imagine a viscous black oil slick) but it can manifest any form it wants – people, animals, horrors beyond the realm of possibility and more. It absorbs the knowledge and memories of anyone and anything it consumes. Over the centuries it’s gone from a simple organism running on instinct to a cunning hunter. Worst of all, it takes pleasure in playing with its food. I mean it straight up delights in it.

This thing can get into any space that isn’t airtight and, even then, it can conjure up a form that will be able to break that seal one way or another. There is literally nowhere to hide and no way to escape. It’s always watching. The only reason it doesn’t immediately kill someone is because it gets a kick out of terrifying them. It can take any of the characters at any time, kill them quickly or slowly, and there’s absolutely nothing anyone can do about it. The only reason they’re allowed to go on is because they amuse it. By its own admission, it basically thinks of itself as god. Or the devil. Kind of both, in a sick and twisted way. And within the context of the story, it’s not wrong.

Monsters scare me. Psychopathic murderers scare me. Zombies scare me. This thing, this creature, goes far beyond that. It can’t be hurt, much less killed, and despite having human-like intelligence, it can’t be reasoned with because it has no empathy or morality – the only things it likes is to eat and to torture what it’s going to eat. It’s an omnipotent psychopath that can be everywhere at once and take on any form you could think of (and some you can’t). And I’ve yet to come across anything that terrifies me more than that.

Rob Rich is a guy who’s loved video games since the ’80s and has had the good fortune of being able to write about them. The same goes for other nerdy stuff from anime to Godzilla, and from Power Rangers toys to Transformers. You can catch his occasional rants on Twitter at @RobsteinOne.